Hey everyone! Hope all is taking care in these difficult times and staying safe. In attempt to try to centralize the Corona Virus threads so people can go to get information on any thing related specifically to what their interests are without having to wade through conspiracy nut case nonsense, or other non related topics it was suggested that specific threads be created that pertains to specific interests in order to provide the best up dated information. On Bryan’s suggestion three such threads should be created and I am trying to help out the MODS in getting this started. This thread is the economic focused one such as how the Coronvirus is affecting the economy, on the micro and macro basis and other business related news and interests, such as Unemployment, Jobs reports etc.

Be warned If you post anything that is not related to this topic I will promptly ask the moderators to remove your post. 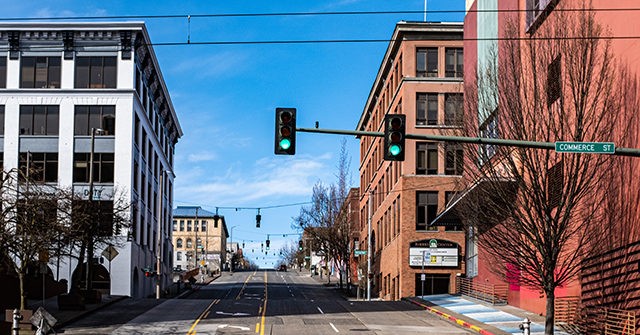 "This is a huge, unprecedented, devastating hit," Yellen said. "My hope is that we will get back to business as quickly as possible." | Economy 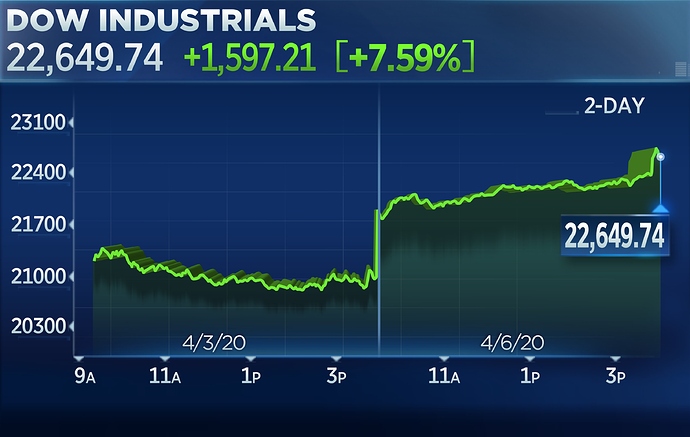 Stocks jumped on Monday as Wall Street rebounded from a steep sell-off in the previous week.

“This is a huge, unprecedented, devastating hit,” Yellen said. “My hope is that we will get back to business as quickly as possible.” | Economy

I’m sure there are a lot of people who’ve gone out of business but I don’t see the doom and gloom she’s predicting.

It may takes some time to get it rolling full steam ahead like it was, but with the urging of manufacturing of pharmaceuticals and PPE coming back to the States that will hopefully open more opportunities.

13% that is not too bad right now. If its starts climbing to levels like 30 to 50% then that is the stuff where civil unrest starts taking place. I am optimistic that we will be getting back to work soon.

Stocks jumped on Monday as Wall Street rebounded from a steep sell-off in the previous week.

Boeing gained more than 19% to lead the Dow higher. Raytheon Technologies, American Express and Visa rose more than 11% each. The S&P 500 was led higher by the utilities, consumer discretionary and tech sectors, all of which closed more than 7% higher. Retail stocks such as Nordstrom, Kohl’s and Macy’s also rose sharply.

Looks like people are anticipating getting back to life as it was.

“If we are fortunate to see an effective treatment there will be plenty of capital gains opportunities. For me capital preservation is more important than capital gains,” said Marc Chaikin, CEO of Chaikin Analytic

I think we are seeing treatments that are successful for some which is going to help us turn the corner.

I think at this point right now is critical. Boeing is what concerns me and what their asking for, they probably will get it if a second stimulus check is sent out. For the love of god though, I wish Republicans show some backbone and not give into the wasteful pork that the left is trying to fleece.

I am optimistic that we will be getting back to work soon.

I’d imagine those in the restaurant/hospitality industry such as cooks, maids, etc. make up a good portion of those in line…

Dramatic images from South Florida on Monday show a long line of cars backed up bumper to bumper on a roadway while motorists wait hours to get food from a food bank.

A drone captured aerial shots of vehicles waiting in line in Sunrise, Florida, just northwest of Fort Lauderdale, on Monday.

The motorists were waiting to receive food from Feeding South Florida, a food bank that relies on donations to feed the poor.

Feeding South Florida has seen a 600 per cent increase in the number of people asking for food as millions have been laid off due to the coronavirus outbreak. 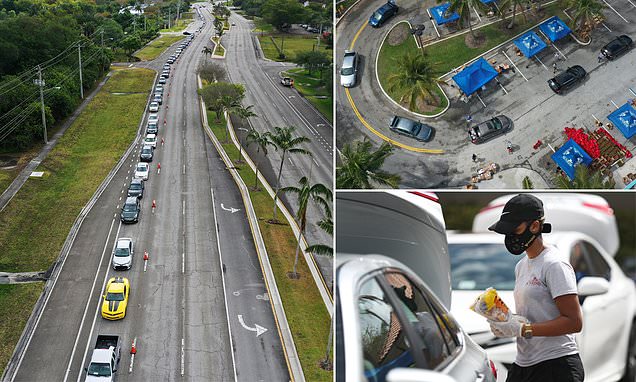 A drone captured aerial shots of vehicles waiting in line outside a food bank in Sunrise, Florida, just northwest of Fort Lauderdale, on Monday.

I was going to ask you about that! No farmers market I suppose ?

Not that I’m aware of. I don’t think many would go anyway. The roads here are like a ghost town. Usually, it is bumper to bumper this time of the year.

Tucker was mentioning about how bad of an idea it is to have just go to the supermarket.

Yep. Not going to the grocery store unless it is an emergency. I’m stocked up for a few weeks.

Fortunately, I had a few packages of hand sanitizer wipes before they ran out of supply. If I do go somewhere I use that to touch any door handles or to type in my code on the credit card machine.

Gator country! If my memory serves me right that is near Ocala ?

No, I’m down in the Lee/Collier area.

I’m not so optimistic. The future economy is;

On the way out are doctors, lawyers, teachers and office workers. Buckle up. This ends no time soon.

The way you frame isn’t actually bad, it’s probably a good thing. It’s reshuffling the deck sort of speak. Lawyers? How useful are them? Teachers? They come back. Doctors are currently on the front line.

Moody’s Says 30% of the Economy is Already Gone

As stay-at-home orders to battle the coronavirus are effective in most states, the virus-related restrictions have already shed 29 percent of US daily output, Moody’s Analytics warns as cited by the Wall Street Journal.

The full scale of economic disaster stemming from almost countrywide closures of businesses in various industries — from entertainment to retail — will not be seen for years. However, the first estimates have already started to emerge, and the picture is quite gloomy.

According to Moody’s study, which was carried when 41 states shut down non-essential businesses, California alone lost $2.8 billion a day, equivalent of more than 31.5 percent of the state’s daily gross domestic product (GDP).

The drop of output in 15 other states, responsible for almost 70 percent of all the US daily GDP, is $12.5 billion, while 30 other states together with Washington DC are losing a total of $4.9 billion of GDP per day.

The economic fallout (in terms of output drop) of the coronavirus crisis has already turned worse that the consequences of the 9/11 terrorist attacks, according to the agency’s data. As the result of three weeks of government-imposed closures, US output tumbled by around $350 billion, while the attacks had cut it by an estimated $111 billion in current dollars.

“It’s like if Indiana disappeared for an entire year,” the chief economist of Moody’s Analytics, Mark Zandi, told the WSJ. “This is a natural disaster. There’s nothing in the Great Depression that is analogous to what we’re experiencing now.”

But what you’re looking at is 70% of the economy disappearing. There is just no way to even explain how bad this is going to be. Everyone who does not have an essential job is going to lose their job.

You see, it was the brilliant idea of someone (■■■■■ to design America’s economy around people selling each other things.

This means that the entire machine of the US economy collapses, pretty much completely.

We are entering into a hell type scenario.

You just can’t even possibly imagine how bad it is going to be. In fact, no one can. It is going to be much worse than the situation in any third world country, because they already have everything set up to run the way it should run in a place with no money. We’re going to have to figure out how to adapt to having no money.

I am pretty confident that China will just assume that America’s solution to this crisis will be to build up a war machine to use against them, so I don’t think they’re going to provide America with the machinery it needs to build such a war machine.

Like, I mean – what is even the extent of our ability to mine and process raw materials?

If we tried to build a manufacturing industry without the aid of China, we would basically have to start from the stone age.

What we do have is a massive military, so I guess the US Government could just immediately declare war on China by blaming them for this flu and then send in an invasion team.

I literally do not know.

The most frustrating part is that no one is even talking about it. Everywhere I go on the internet, it is just a bunch of hysterical dumbasses talking about how this virus – which is literally just the flu – is going to kill millions. They’re still saying that.

The only large group of people that isn’t pushing this retarded gibberish are some of the Magapede conservatives, and they’re too simple to even think about what is going to happen when this is over.

It’s really frustrating and lonely to be the only person saying “this is all a hoax, and we need to start figuring out what is going to happen when the hysteria fades…”

They want us, the non-elite, to starve.

Here are some interesting facts…

I wish Republicans show some backbone and not give into the wasteful pork that the left is trying to fleece.

You know the Democrats are being completely disingenuous because if they really wanted to “protect workers”, they would have immediately proposed to split the bailout bill into two separate bills: one to give money to the regular people, and one to give money to corporations. Everybody pretty much agrees on the former, so the bill would have been passed immediately. Then they could hash out the details of the corporate and financial bailouts separately. But obviously doing it that way would help Trump, so no go.

Of course, you could then ask why the Republicans aren’t making this move to put the Democrats on the spot. But of course, AIPAC, corporate interests, and chamber-of-commerce-types who own the Republicans will forbid that because they want to hold the common man’s welfare hostage to ensure they get their money first. They have to do it that way because giving hedge funds, banks, and corporations massive amounts of free money is extremely unpopular with the voters.

This is why our dumbocracy is doomed.

Every now and then we see the next round of global deflection. “It wasn’t me”, or in this case “it didn’t originate here”. However there is mounting evidence that a new strain of the SARS Aurora Virus (big name for a tiny germ) is starting to spread. The effects are serious. This virus infects humans causing flu-like symptoms. As if that was not enough the resulting debilitated human is then ripe for invasion by other endemic germs particularly those causing pneumonia. If left untreated this le…

Not related to this thread and this is intentional trolling