Virginia is for fighters & militias 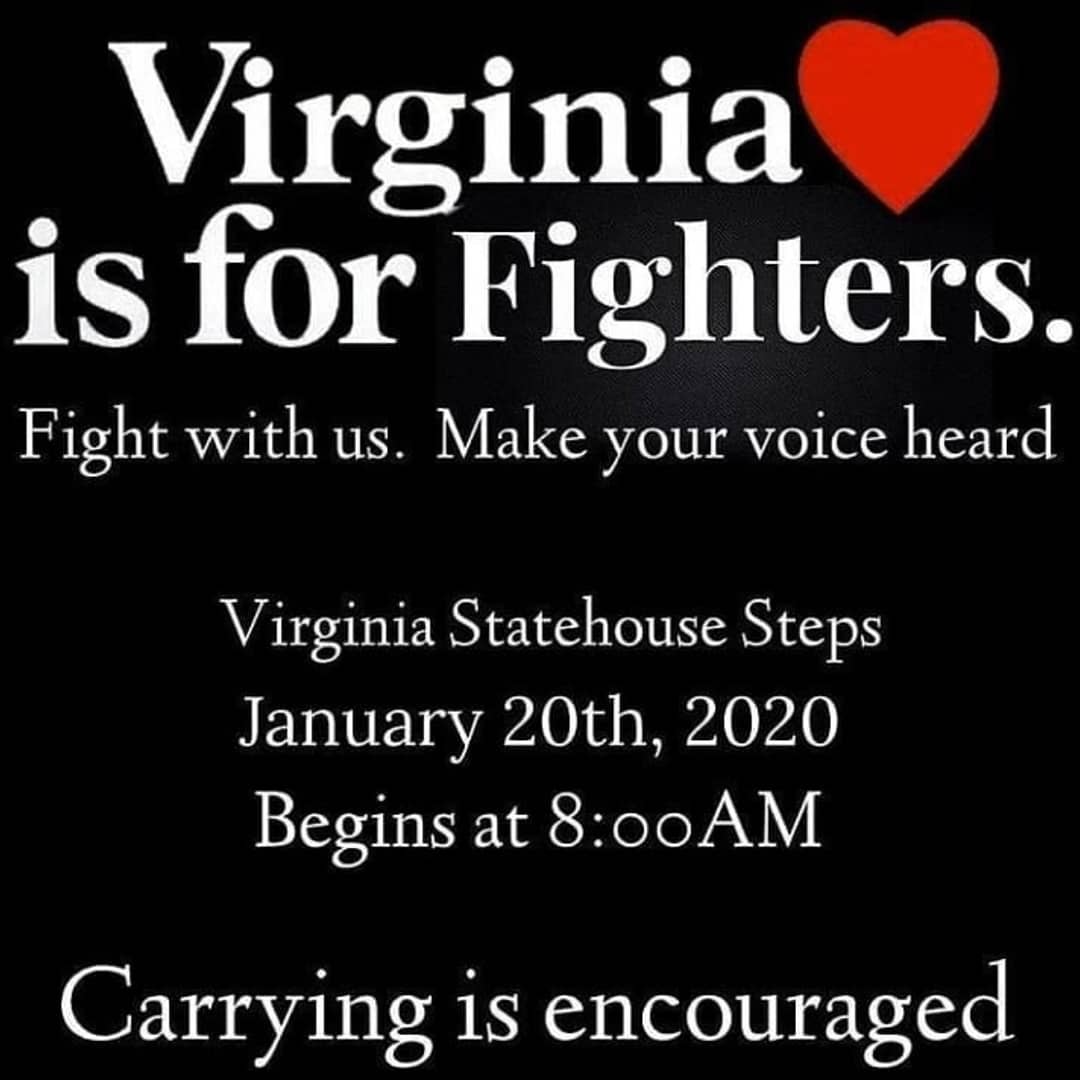 Keep up with things related to the Militia Movement at MyMilita.Com – lots of useful information, including how to find the Militia nearest you.

Let’s hope so because right now it looks like Virginia is for cucks, based on who they elected.

All attempts at organization against the government are futile. This isn’t 1776.

All attempts to overthrow the government at the moment would be suicidal.
But ‘organizing against’ the government can be very successful – witness the anti-war movement of fifty years ago.
The Right tends to lack smart political leadership – that’s our main problem. We need a conservative Lenin. Maybe one will emerge in time to save some part of the Republic.

By the way, I see the notice above says “Carrying Is Encouraged”.

Please go to the Virginia Citizens’ Defense League Website – they are the people organizing this protest – and note what they say about ‘carrying’ etc.

The last thing we want is a bunch of scary-looking guys in camo toting their AR15s. This is a battle for the hearts and minds of the broad middle of America. A large peaceful demonstration of ordinary citizens will be a huge victory for us. A small demonstration, or a violent one, will be a huge defeat.

Here’s what they say:

If you are asking how you can help with VCDL’s mission, carrying long guns at Lobby Day is not helpful - it is a distraction. VCDL’s important messages inevitably get lost as the press rushes to get pictures of anyone carrying an AR or AK. The stories then become about the rifle, not VCDL’s agenda. You can set your watch by it. Long guns are not easy to carry in a crowd, either. VCDL needs its voice heard loud and clear in order to able to stop the onslaught of gun-control bills.

Laws you need to know for carry in Richmond

Open carry without a CHP is legal in Virginia, but watch the restrictions in the previous paragraph.

You need a CHP to carry in the General Assembly or Capitol Building. Once through security, you can carry openly or concealed in the buildings. You cannot carry in the gallery over the Senator Floor. Keep an eye on these alerts. Should any of this change, we will notify you here.

We are NOT there to have arguments with the other side. They lobby, we lobby, and never the two shall meet. Just ignore them.

And we are not there to push any other agenda. Our total focus is on protecting our right to keep and bear arms. Period. This is not about flags, statues, history, etc. Just guns.

If you somehow find yourself being harassed by the other side, don’t engage them. They could well be baiting you and recording what you do for propaganda purposes. If necessary, go find a police officer and let them take care of the person causing the disturbance. Otherwise, just ignore them and go about your business.

The last thing we want is a bunch of scary-looking guys in camo toting their AR15s.

And yet, that’s what so often shows up and that’s the face that’s on it whenever the rest of the country thinks of it. 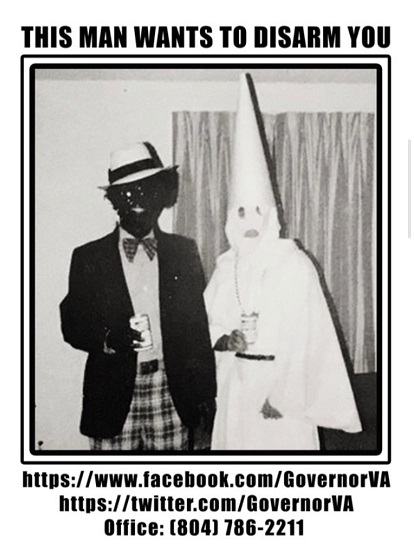 Let’s hope so because right now it looks like Virginia is for cucks, based on who they elected.

That is what happens when you have liberal city dwellers who outnumber the rural folks.

I truly believe Governors should be elected via an Electoral College to balance the scales.

There is no doubt that the militia movement needs to sit down and think about public relations. And there is certainly a strand of its membership who have a kind of épater les bourgeois attitude, which is not helpful.

However, when the press want to cover the militia movement, or someone writes an article on them, what photograph will they choose, if the choice is between camo-clad bearded middle-aged guys with frightening black rifles, or, say, a group of people watching a First-Aider demonstrate how to deal with a penetrating wound? There is not conspiracy here – one sells newspapers, the other not so much. I would do the same if I were doing an article on Anti-Fa.

This can’t be helped, much. Hopefully, in a few months, every active militia unit in the US will ahve received a document on how to do public relations, how to deal with the press, etc. Perhaps this will have some effect. That master of guerilla warfare, Mao Tse Tung, prescribed 10 PR people to each batallion, and he knew what he was talking about.

Hat’s off to VCDL for putting that out.

The worst possible thing people could do is show up carrying, especially openly.

Guranteed the left will be hoping for and trying to instigate a situation where shooting starts. If they succeed we lose.

Novel idea. Unfortunately the founders never envisioned that a majority of Americans would be living in cities, much less huge metro areas rather than on farms.

If you want to know why these things are happening now in Virginia, after all these years, see this topic:
The real reason behind the showdown in Virginia

An armed movement isn’t going to accomplish anything, it all has to do with demographics.
As they say, “Demographics is Destiny”

It’s about 30 years of careful manipulation of the demography by moving more and more federal employees into the state.

It’s also about a depressed and somewhat demoralized non democrat electorate going into 2018-19.

There is no doubt that the militia movement needs to sit down and think about public relations. And there is certainly a strand of its membership who have a kind of épater les bourgeois attitude, which is not helpful.

Well, VCDL Sure seems to be approaching it with the proper attitude.

As to what photography the press uses, is wholly dependent upon people following VCDL’s directive.

I agree absolutely.
If you go on to YouTube, and put ‘Virginia rally’ into the search bar, you will retrieve several videos related to this rally.
If you load one, and look at the comments section, you will find many huffers-and-puffers saying we should bring our guns to the rally, we should arrest the governor, we should hang the legislature for treason… along with various supposed legal justifications for doing these things, by people who very obviously have no historical knowledge or legal expertise whatsoever. They’re just mesmerized by big words.

I assume half of these people are Hard Left agents provocateurs. And the other half are just bullshitters who have not the slightest intention of risking their persons at the demonstration and probably won’t even show up at all. They’re the sort of people for whom a weapon is a substitute metal penis.

But … there is the possibility that among them are one or two genuine nutters, who have the capacity to turn this demonstration into a disaster by bringing a weapon and then refusing to be disarmed. The mainstream media will of course be hoping fervently that this happens. I hope the real patriots at this rally are hyper-vigilant for either provocateurs or lunatics and take them down without hesitation if they try to destroy the demonstration.

If you load one, and look at the comments section, you will find many huffers-and-puffers saying we should bring our guns to the rally, we should arrest the governor, we should hang the legislature for treason…

It’s a moot point as the legislature already passed a resolution banning guns at the capital where this rally is suppose to take place. All speculation on your part.

If you load one, and look at the comments section, you will find many huffers-and-puffers saying we should bring our guns to the rally, we should arrest the governor, we should hang the legislature for treason… along with various supposed legal justifications for doing these things, by people who very obviously have no historical knowledge or legal expertise whatsoever. They’re just mesmerized by big words.

And if those type people show up talking and acting that way, that’s the face that will be on the rally and the larger objective will have been lost.

I assume half of these people are Hard Left agents provocateurs.

You loose me when you make that leap. Can you substantiate that???

Exactly the position I’ve been taking on another board where apparently a lot of those nutters are members.

They call me some kind of traitor for wanting to disarm them and make them all victims of ANTIFA attacks and attacks from other leftwing loons.

Nothing would benefit the anti gunners more than this event turning into a bloodbath and no matter how it starts it would be the organizers and marchers who will be blamed.

On the other hand if some of them end up being casualties because of obviously unprovoked attacks it would swing public support to their side.

Patriots and those willing to stand up and fight evil used to be considered heroes, in the modern era it’s the victims who are elevated to such a position publicly.

As for being agents provocateurs … no, I’m being rhetorical there. Probably most of them are working for free. Although I can tell you that it’s widely believed within the militia movement that one ‘General Bloodagent’ is an FBI employee. I don’t necessarily believe that myself – no one could fake being that destructive and narcissistic.

It’s not ruled out that the informants planted in the militia movement – and you can be sure that there are many – will be urging extremist actions, though. There were 15 informants involved in the (unwise) Malheur occupation by the Bundy son, the one that resulted in Lavoy Finicum being killed.

If you’re not familiar with how informants behave, read up on COINTELPRO … the Wiki article is a good place to start, for a deeper dive, read Days of Rage.

Typically, informants always support the most extreme faction, or tendency, within the movements in which they are embedded. They have an immediate material reason for doing so – the more scary the group appears to be, the more important the informant. But their handlers usually want them to do this, as well.

That’s why all the FBI informants at the last convention of SDS in 1969 supported the Weatherman faction-- and the victory of Weatherman and its allies there led to the total destruction of SDS almost immediately. (Before the Weathermen began their terror campaign – they were in charge of the National Office in Chicago, where the membership records were … and they destroyed them, throwing them all into Lake Michigan. The organization never recovered.) A mass organization of 100 000 members, poised to multiply its membership … gone, overnight. (Hooray for Weatherman, say I.)

I lived through this period – and in fact was in at least five local groups which later turned out to have police informants in them – and so COINTELPRO and Weatherman etc etc are completely familiar to me, but I realize many people reading this may not be 70 years old or more. So if you’re interested, you’ll have to look these terms up. Lots of lessons for today.