Well things are about to get really interesting for Europe and the Geopolitics of all NATO member countries as this story just surfaced and is currently developing.

Highlight of this story:

"With the European nations, NATO allies, refusing to take their ISIS fighters back as prisoners, President Trump has made a deal with Erdogan to take them.

In the announcement President Trump has made it clear that any action by Turkey into Syria is unilateral; there will be no assistance by the U.S. on any aspect; including if Turkey is counter-attacked by Russia/Syria or organized Kurdish forces.

Essentially, Trump is leaving Erdogan naked to a myriad of his enemies if Erdogan does cross the border. The U.S. part of the NATO shield is removed. The Europeans will likely not evoke the NATO defense treaty without the U.S. Heck, the EU is essentially spineless without the power of the U.S. military.

In essence, this White House announcement is a major Gordian knot being cut." 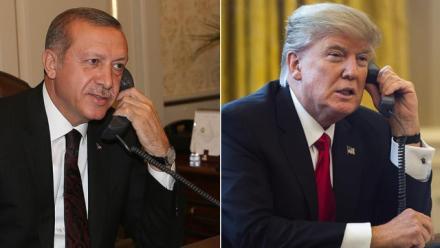 Things are about to get very interesting and very uncomfortable for NATO.  President Trump has announced that Turkey is about to launch a unilateral invasion into Northern Syria… There is goi…

I’m seriously uncomfortable with this. There’s a very good chance Turkey is simply using this as a pretext to attack the Kurds and drive them out of NE Syria, if that’s the case and we abandon our best and most loyal ally in the region it’s going to be a horrible stain on his presidency that will never be removed.

I seriously doubt that this administration would leave the Kurds exposed if there wasn’t a deal in place already with Turkey not to engage with them militarily. Trump went out of his way to honor the Kurds for their role in Syria and he would look pretty silly for ignoring the greater dynamics of the relationship the US has with the Kurds. IMO this is a gambit as the article suggests to expose the duplicity of NATO, and put the pieces on the chess board in a compromising position politically!

I seriously hope you are correct but Trump has no core principles so I’ll remain skeptical hoping that this is not the case.

What I know for sure is that Erdogon cannot be trusted period and he has a deep seated hatred of the Kurds because of the Kurdish separatist movement in Turkey.

What I know for sure is that Erdogon cannot be trusted period and he has a deep seated hatred of the Kurds because of the Kurdish separatist movement in Turkey.

You are right, Erdogan can not be trusted which why this story is extremely interesting. There is an ulterior motive for doing this, and the linked article is adept to explaining the “whys” and “hows” and what it will mean if he takes the bait!

The question is that if he goes on the offensive against the Kurds what then? Will the US, UN, NATO or anyone else step in to protect them?

If we don’t we may pay a horrible price in the future and they will likely never be there for us to rely on again.

They have been screwed every way a people can be screwed since they first aided the west in WWI to bring down the Ottomans.

They have been screwed repeatedly by the US since the first Gulf War when 41 promised them support if they rebelled and more than 50,000 of them were killed when the support never appeared.

They were screwed again after OIF when again they were promised autonomy and control of the oil fields in their region when the final agreements and the Iraqi constitution was approved by the US and allies and control was way too quickly handed back over to the Iraqis.

How many times do we screw them before they just become one more group of terrorists attacking the west for revenge?

You simply have to look at who specifically benefits from this to explain Trump’s position.

You simply have to look at who specifically benefits from this

Trump managed to escalate the Syrian civil war, embolden ISIS, betray the Kurds and show France and Britain that our country cannot be trusted to keep its word, all to curry favor with Turkey so he can keep Trump Tower Istanbul. 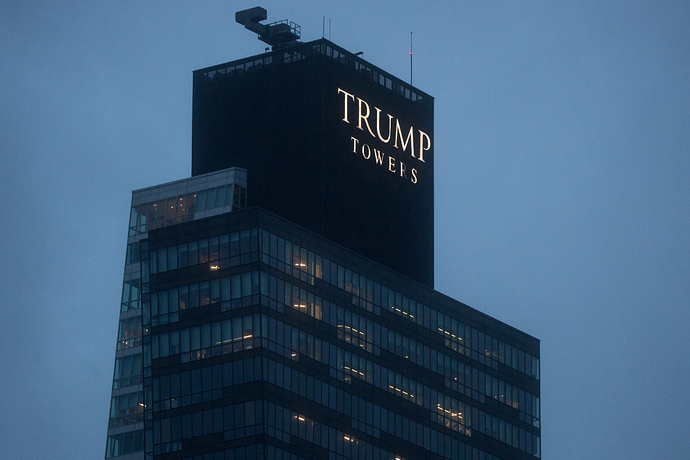 Donald Trump admitted in 2015 that the towers represent a conflict of interest in his dealings with Turkey.

Even his most die hard supporters can see the corruption in this latest blunder. 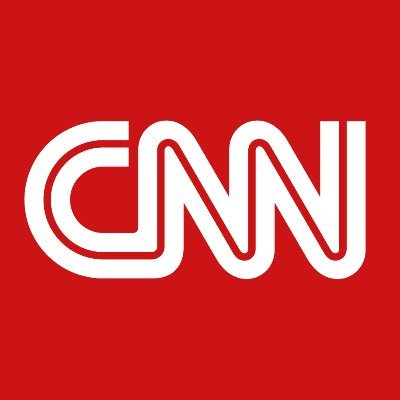 Sen. Lindsey Graham, one of the President's strongest GOP defenders in Congress, has blasted Trump over his decision to remove US troops from northern Syria as Turkey plans a military offensive in the region, saying it was "shortsighted and irresponsible" cnn.it/2VnxjiF
1 Like
Opinion8d October 7, 2019, 6:29pm #11

I see the logic and approach of President Trump here. Why should the United States continue exerting all of this time, energy, manpower, and resources in the region when powerful and wealthy regional actors won’t do the same in their own backyard? 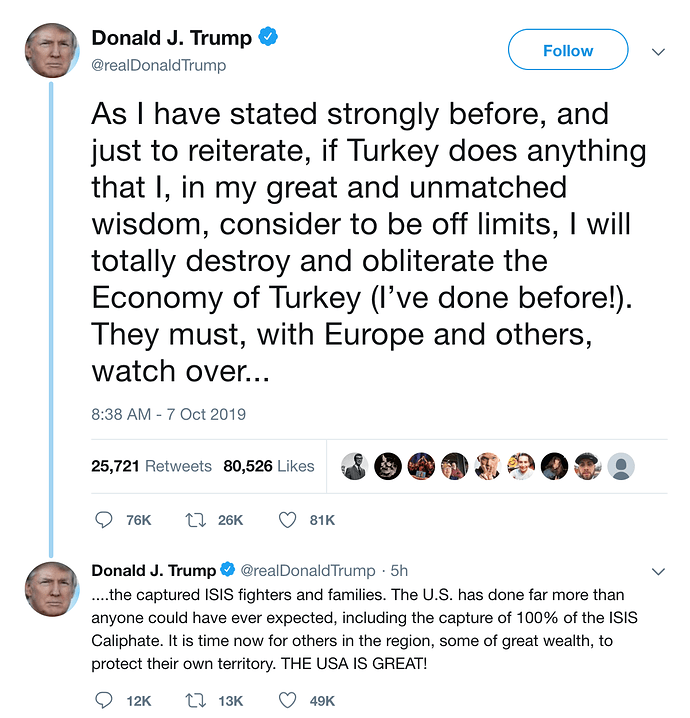 I have been critical of Trump lately but this is the right move. The only people bitching are Democrats and neocons who never saw a unwinnable war they didn’t like.

Yeah! That is an under statement when viewing this asshats shit posts!

I second this. On this front, Trump is doing exactly what he said. No more wars. He’s done a couple of small things here and there but nowhere near the levels of Bush and Obama - now all of a sudden the “anti-war” left is bloodthirsty.

I really think Trump means it when he says he will obliterate the economy of Turkey. However, Trump’s biggest failure remains clearing the swamp of its neocon/neoliberal creatures. Which is why they continually push for impeachment under some crazy pretext.

That part of draining the swamp creatures, its not so much a failure when playing the long game. Its the Machiavellian strategy. Let those die on their own sword then to make a martyr out of them!

I hope that is the silent strategy as well.

Pure gift to Turkey, Russia, Iran and Syria…ask Moscow Mitch. The Kurds have been betrayed, pure and simple.

You don’t want the US out of gratuitous and endless war in the ME?