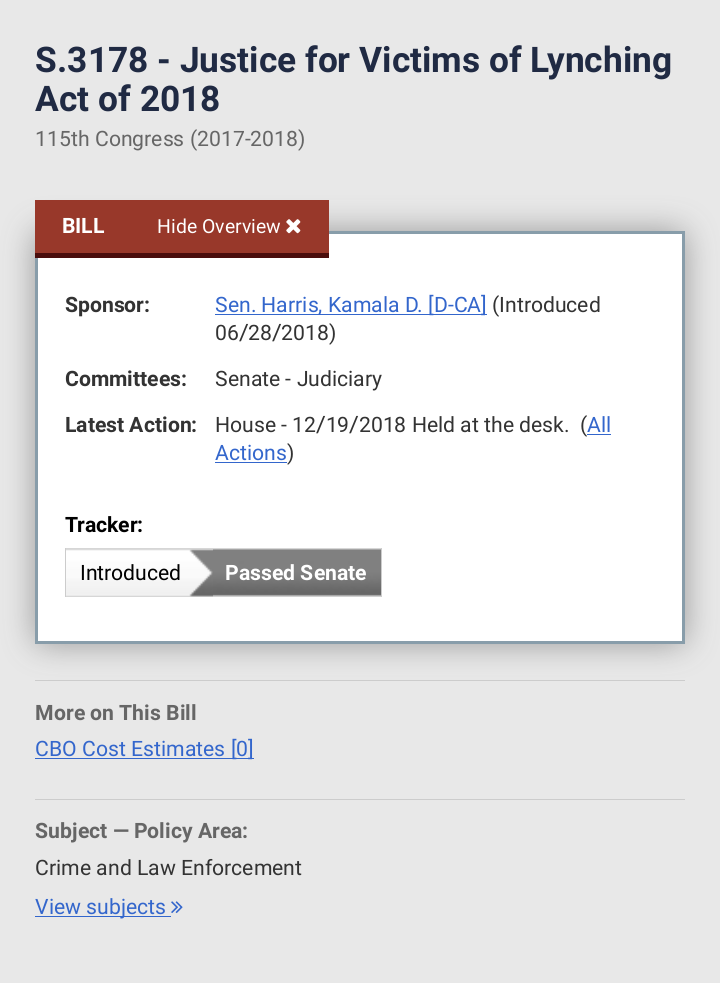 This may be one of the most obvious false flags of recent history. While attention or a little publicity may have been a motive, I’m pretty sure he was doing this to help out Kamala Harris.

He is at Kamala’s announcement party.

Kamala has anti-lynching legislation that has stalled in Congress.

She only has 3 bills that have became law and all are BS symbolic crap.

All of a sudden, her gay black friend, has a lynching incident.

Who knows when the last time something like this has ACTUALLY happened, especially in Chicago.

Kamala puts out a tweet saying this is a “modern day lynching” and Congress needs to act.

She doesn’t mention HER legislation so it doesn’t appear too obvious.

Less than 1 hour later, Cory Booker tweets out about this “modern day lynching” using that exact phrase and says Congress needs to act and includes a link to Ebony magazine.

Seems blatantly obvious to me. 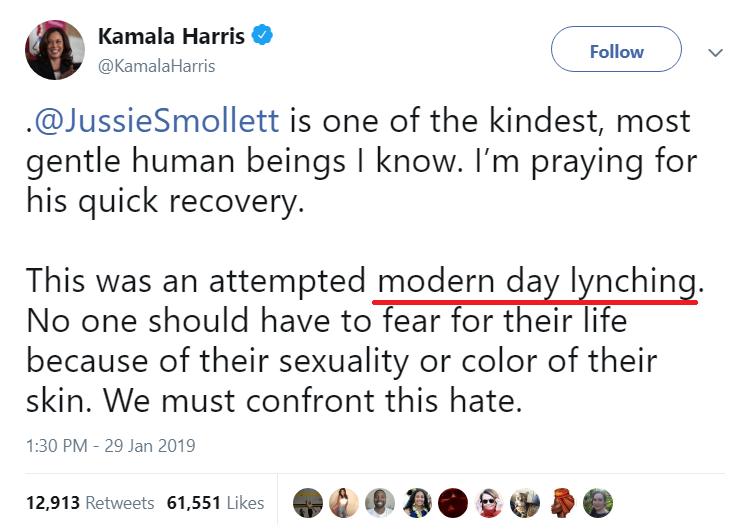 So he got beat up for political reasons? Wtf?

No silly, the implication in the OP is that he did not get beat up at all. That he made it up for political reasons.

I know the crime reeked of fabrication.

Had no idea the female Obama impersonator had legislation that needed a show.

This is really bad.

If this turns out to be a fraud it going to make the Tawana Brawley fiasco look like nothing.

Generally I ignore clickbait stories of race hoaxes. I had no idea Jussie Smollett put a noose on his neck!

I didn’t realize how lulzy this case was. Sadly, Chicago PD won’t do anything to him even when they confirm the story is a hoax. That’s why this Kamala connection is way more important. If this was engineered to give her a race-baiting platform she’s fucked.

The dead give away was the whole rope around his neck thing. They just happened to have a rope on them? Cops are saying they still don’t have any description, downtown Chicago, not caught on any camera? Unlikely.

There are something like 20k surveillance cameras that they can use to do their forensics work. Not a single shred of evidence. The dumbass and his manager also won’t give their cell phones to the police.

If I were Trump I would send the feds in on this one. If Chicago police are thinking it’s a hoax, they will be getting a call from the Mayor telling them to keep it to themselves. If I were Trump I’d be like, this is so horrible, I am sending in the FBI to catch these horrible people who did this, and then prove and document that its a hoax.

Love how he said they recognized him from his show too lol. Trump worshiping, racist, homophobic Empire fans, sounds legit.

Ha! I hadn’t thought of that. Doesn’t exactly fit the market demographic for the show does it.

Oh and it’s not like he has any motive to lie. 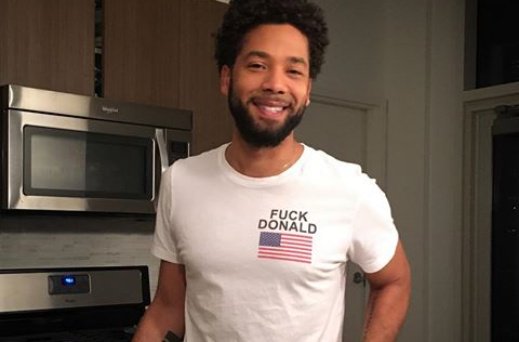 If I were Trump I would send the feds in on this one. If Chicago police are thinking it’s a hoax, they will be getting a call from the Mayor telling them to keep it to themselves. If I were Trump I’d be like, this is so horrible, I am sending in the FBI to catch these horrible people who did this, and then prove and document that its a hoax.

The rope likely has some DNA on it from its handling. The way a noose is made would cover parts of the rope. It would be interesting to look at that section of the DNA that was put on before the noose was made.

His last name is the same as the president’s first name.

Proof positive that Democrats think the entire country is just as dumb as their supporters are.

Interesting how supposed victims of “hate crimes” end up acting like perps as soon as people decide to actually investigate their bullshit claims.

I was a little torqued off when I joined the Army. I was never taught basic skills that every white person should know, like tying a noose. I had to have a black man teach me and then I was accused of promoting racial tensions because I had a noose in my room, that my black Sgt. tied for me while he was teaching us knots. . . when they found out Davis tied it, all of the sudden I was a good guy again. I’m sick of the cries of racism in this country. Almost no one’s racist anymore but if they’re not careful, they’re going to create more with the constant lies.

GQ at it again.

The incident sparked recollection of many alleged hate crimes that too quickly prompted social media cries of racism and anti-Trump rhetoric only to be later proved as hoaxes. Breitbart keeps a running tab of over 100 hate crime hoaxes since President Trump’s election. Smollett’s suspected attack is eerily similar to one from Massachusetts where a 20-year-old man claimed he was the victim of an assault by two racists who called out “Trump country now” during the attack. After police interviewed the “victim,” he admitted that he had made the story up to “raise awareness” of issues in the country.

It is still too early to tell whether Jussie Smollett’s claims of victimhood are true, false, or somewhere in the exaggerated middle, but that only means that it was too early for outlets like GQ and TMZ to be running stories that place blame at the feet of the president and his supporters for a crime they can’t be sure occurred.

More conspiracy theories. Just can’t believe that racism exists can we? Right out of the con playbook

Racism and bigotry are far more prevalent traits in leftist sheeple. Tribalism also happens to be something they don’t understand because inner-city families are almost non-existent anymore.