California projected to gain 11 house seats because of illegal immigration in 2020, America is done 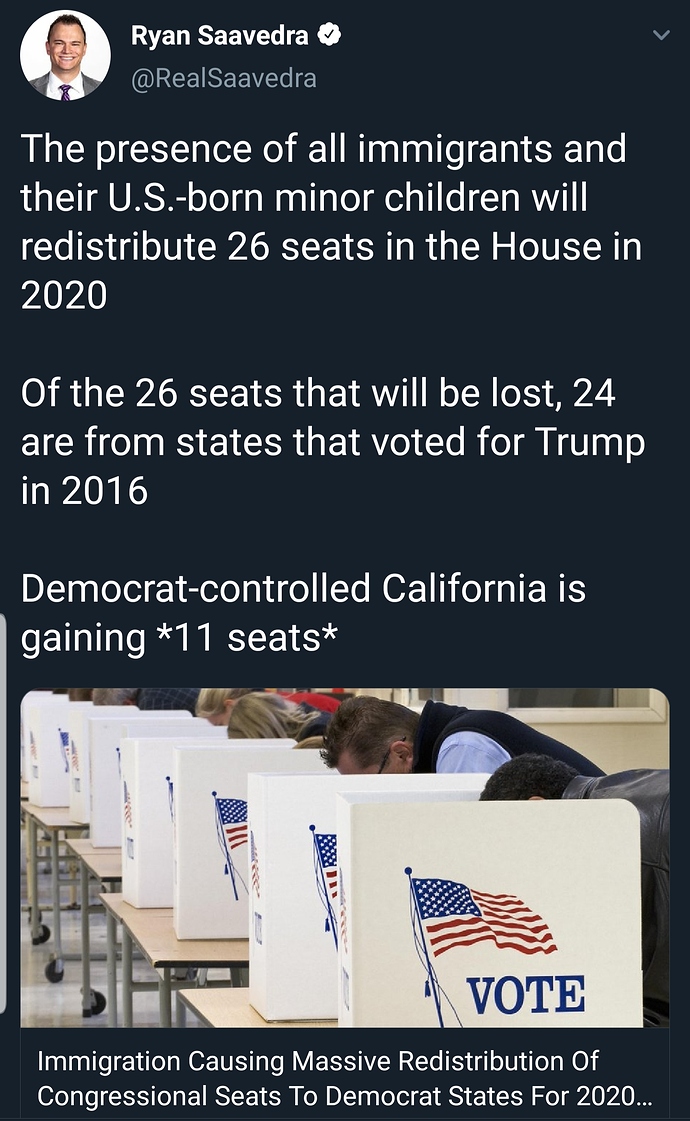 A new analysis released late last week found that a massive number of seats in the House of Representatives — enough to flip the majority in the House — will be redistributed primarily to Democrat states as a result of the increasing number of legal and illegal immigrants in the U.S. population.

The Center for Immigration Studies (CIS) released the findings from their analysis on how legal and illegal immigration is set to impact the political power structure in Washington, D.C. for the 2020 elections.

Key findings from CIS’s analysis include:

The Trump administration fought to include a citizenship question on the 2020 census, which would have likely provided a mild alleviation from the dramatic power shift that is about to occur, but it was shot down by Chief Justice John Roberts — the same conservative Supreme Court Justice who kept Obamacare from being destroyed in the courts.

CIS found that Democrat-controlled California was “the biggest winner” in the political power shift “as it will gain 11 more congressional seats due to immigrants and their young children.”

The analysis came at approximately the same time as a new report from the Department of Housing and Urban Development (HUD) which found that the homeless population in California has exploded over the last year and was single-handedly responsible for the increase in the national U.S. homeless population.

A separate report, also just released, found that California’s population growth rate has declined to its lowest rate in nearly 120 years as tens of thousands of people are fleeing the state.

The analysis from CIS also found that “Ohio is the biggest loser from immigration, with three fewer seats due to the presence of immigrants and their U.S.-born children residing in other states. Michigan and Pennsylvania will have two fewer seats, while Alabama, Arkansas, Georgia, Idaho, Indiana, Iowa, Kentucky, Louisiana, Minnesota, Mississippi, Missouri, North Carolina, Oklahoma, Rhode Island, South Carolina, Tennessee, Utah, West Virginia, and Wisconsin will each lose one seat.” 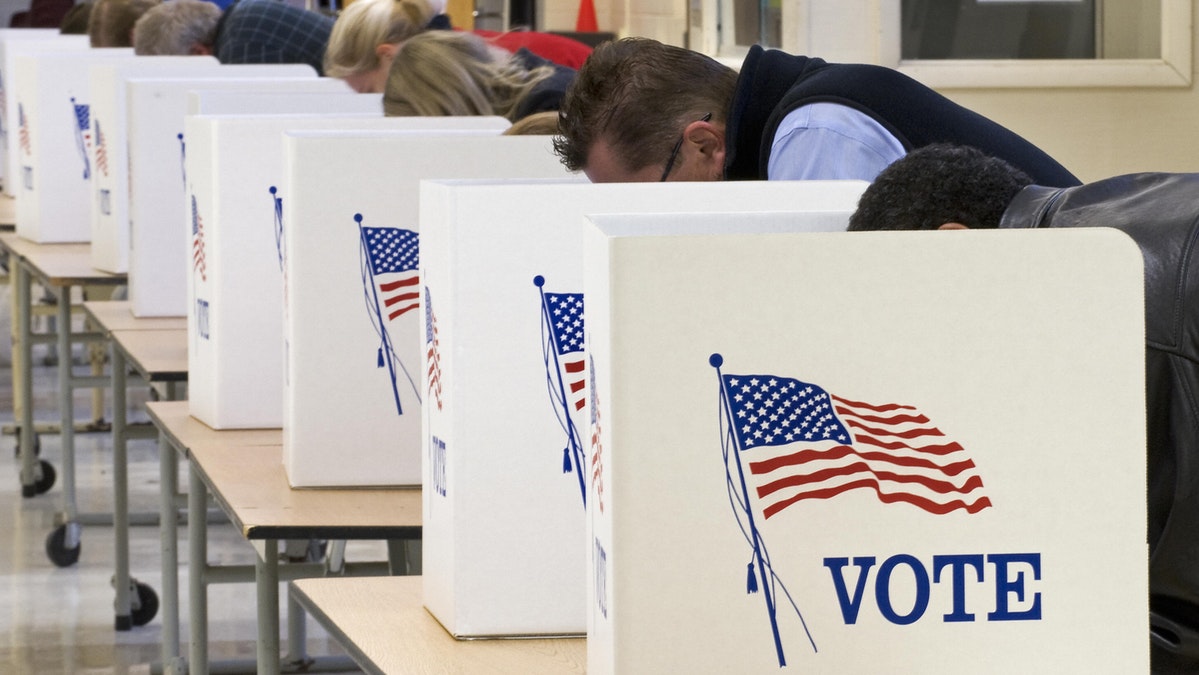 A new analysis released late last week found that a massive number of seats in the House of Representatives — enough to flip the majority in the House — will be redistributed primarily to Democrat states as a result of the increasing number of legal...

I fail to see how destroying a country can be considered gaining ground.

Ok, so what is the GOP doing to fix this?

They don’t want to fix it! They are in on it too! It’s the matrix that they contributed to.

I blame it on the fact, parties refuse to work together. American citizens die daily at the hands of illegals. Both parties should work with a vengeance to see our country safe. This is a no-brainer. And that says it: NO BRAINS.

Gotta start somewhere. A secure border is critical. Maybe just baby steps, but at least steps. Moving on; and like it or not, THIS WILL WORK. You enter the USA at monitored ports - points of entry. If you attempt to cross the border anywhere else, YOU WILL BE SHOT ON SIGHT. Works for me. Something to digest; all the humans on this list ( one of many lists ) would be alive if it were not for the illegal aliens who took their lives. Victims of Illegal Aliens Memorial - OJJPAC.org

Well, we knew this was going to happen when Roberts shot down the citizenship question.

At least Trump fought it all of the way to the Supreme Court. Not much we can do about it but to keep fighting illegal immigration and deport as many as possible.

Very telling that they gain 11 seats in spite of the below:

A separate report, also just released, found that California’s population growth rate has declined to its lowest rate in nearly 120 years as tens of thousands of people are fleeing the state.

This is where the focus should be! Voter ID should be something that we should fight for!

Here we go again with Democrappy arguments about why voter ID is racist when there is no basis for this argument. In fact the only reason the commiecrats are against voter ID is not because of racism but because it will seriously impinge their ability to commit voter fraud! Of course I digress, the real issue in this OP is why oral arguments about this law from the left deem this law to be racist and what their rationale is for putting forth such arguments to oppose voter ID? https://www.nbcne…

The thread title is deceptive. Illegal AND legal immigrants are affecting this.

And 1 illegal is too dam many , respect our laws and our borders . California soon to be the sewer of the Country . I wonder how long the working middle class will put up with this bullshit .

An interesting article. Things may not be as dire as they appear

After years of projections that congressional reapportionment in 2020 would see red states lose political power to blue states that have been inundated with illegal and legal immigration over the last decade, analysis of Census Bureau data predicts that it is blue states that will, in fact, lose congressional seats. 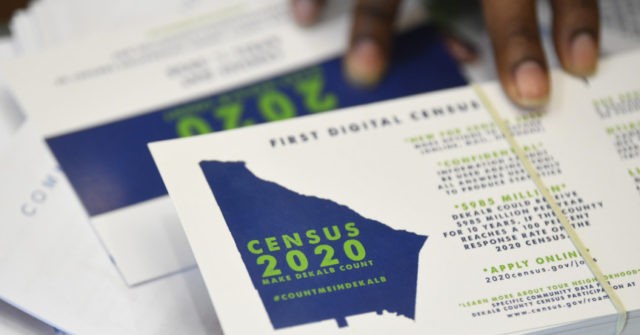 A series of blue states are set to lose political power in 2020, newly released data from the Census Bureau suggests.

Isn’t that nice!!! Comiefornia with Commisar Pelosi will have more control in the House. Commiefornia needs to be put out of the U.S. to be its own country or part of Mexico.

We need to take this country back! I am so sick and damn tired of these illegals having everything in our country headed to them when they have a contributed anything and all they do is take. Our ancestors built this country and they didn’t build it for them.

I said why right in the post you quoted…

Our ancestors built this country and they didn’t build it for them.

AFTER inciting a war with them and taking half of their country from them. I’d say theyve contributed plenty.

Something a lot of people may not know, illegal aliens and non-citizen workers on temporary visas also get counted in the Census, for the purpose of determining how many representatives each state gets.

What needs to happen is the House needs to be enlarged to at least 1000 members elected by 250 electoral districts by ranked choice voting. That way Independents, Libertarians, Falconists, Greens and others have a fighting chance in elections.

…but the motor-voter laws in several states require only the presentation of a driver’s license to vote. These states pass out driver’s licenses like plastic toys in boxes of Cracker Jacks.

Some states require no ID at all. Just show up.

Oh please, are you a member of La Raza or something? You don’t know anything about history because that’s not how the war went. We kicked their asses out of California long before we fought (and won) in Texas. That’s how territory is gained and lost, through battle.