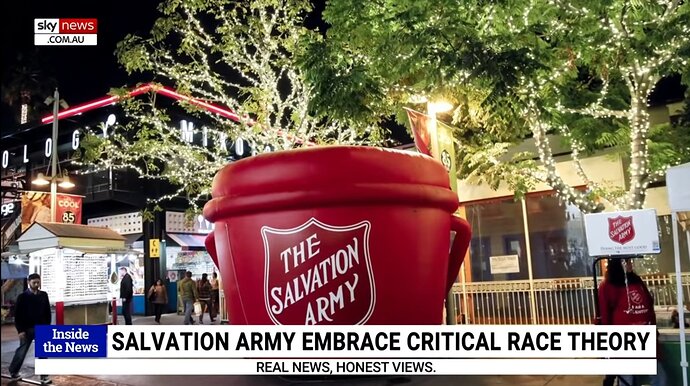 "The Situation is Dire" - Salvation Army Faces Holiday Shortages After...

Good! I am so happy to hear this news! This is how to defeat Marxists who infiltrate such orgs! Power of the purse is still a useful tool! Let them cry all they want because its just getting started!

This is total crap! I can’t believe now The Salvation Army is getting into the race game. I used to donate all the time to this organization, but not any more! This is pretty pathetic and outrageous at the same. Since when did the Salvation Army become Commie RED, as in China Red, or Bolshevik Red? "Christianity is Institutional racism? Same shit that is in CRT that parents across the country is protesting about. The Salvation Army wants its white donors to give it more than just money this Chr…

Salvation Army, aligns the organization with the ideology of the Black Lives Matter, antiracism, and critical race theory movements.

Defining “structural racism” as “the overarching system of racial biasing across institutions and society,” the guide declares: “These systems give privileges to White people resulting in disadvantages to People Of Color.”
Let the blacks fill those buckets , then the looters can pick it all up .

I told them they are racist

I simply walk by and spit and those morons get the message . Fucking Monty’s children of the corn .