With so many crisis under Biden, when do we …

What’s the point of impeachment, someone worse with no talent is behind him miles long with untalented Democrats.

They gave up our country and we sit here doing nothing. Urban areas are seeing these refugees destroy our country. Poor American wages and tolerance for a room Full of filth are pushing them to over dose or just get slaughtered in the street with gun violence.

Mitch McConnell needs to be replaced now! We are at war this ain’t 1990 anymore. 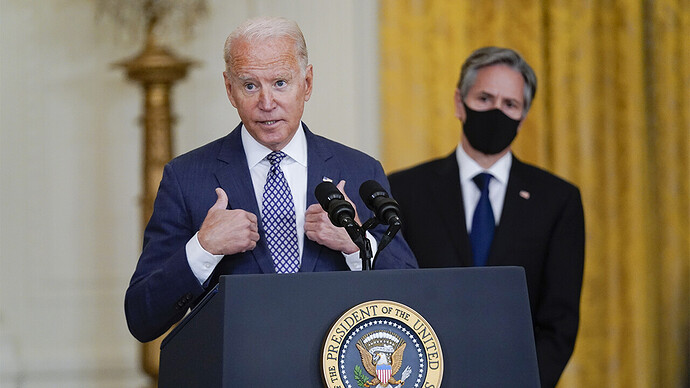 The Biden White House is in free fall. The president’s approval ratings continue to slide and will likely worsen as Americans digest recent disasters and put the blame where it belongs – on Joe Biden.

Republicans are too busy sending angry letters. Nothing ever happens and we need to stop sending these pieces of shit to Washington.

Yet they are re-elected nearly 100% of the time.

As I’ve said forever, when the 43% of independents start voting independent, we’ll get some change….

But it must be done from local on up….

Republicans are one side of a coin. Trump was/is a Republican……

A great American that ran on the ticket.

The only way a successful impeachment will take place will be after the Republicans take back the House. That will also change the succession for president stats. Nazi Pelosi will no longer be in line.

Remove Jim Crow Joe (who deserves prison for the crimes he has committed) and Kamala the Ugandan Giant proceeds to screw up, piss off her own party, and practically guarantee a THIRD Trump landslide victory. And there should be enough Republican votes in Congress to stop her from doing too much damage.

That’s the best possible scenario, but it requires a Republican takeover of the House.

There are no independents. If there were, then there would be an independent third part with enough national organization to threaten Republican or Democrat majorities in Congress.

There are some liberal Democrats who dislike the term “liberal.” (As they should. Today, the word liberal is an insult.) They try to call themselves independent.

The only TRUE independent thinkers in America are conservatives. We’re the only educated ones with a clear eye on the problems the Democrats have caused.

Trump will be back in the Oval Office in 24. There’s NO WAY that Kamala the Ugandan Giant could possibly go up against him. Even the massive voter fraud that illegally put Jim Crow Joe in office will not be enough, since Kamala is disliked by her own party.

And President Trump will have a ton of work to do, fixing what the DemoNazis broke.

You’re good for one vote, who you going to spend it on?

Trump is history and he won’t be back his age and health won’t fly, and his fear of being defeated by another democrat won’t allow him to run. Wanna bet….

Trump won 84% of the counties in America with 11 million new voters. If we can get Democrats not to cheat. Republicans sweep again

You’re good for one vote, who you going to spend it on?

Trump is history and he won’t be back his age and health won’t fly, and his fear of being defeated by another democrat won’t allow him to run. Wanna bet….

I don’t want Trump to run in '24. I thought Trump was great for the country, but the country doesn’t need the turmoil it would cause. The country needs a stable, confident, strong leader the next time around. Trump is all at least two of those, but no matter how good a POTUS I and millions of others thought he was, he isn’t the man for the job… again.

I know some of you will disagree with me, and that’s okay.

I totally disagree, we can’t let the evil win, we need to stomp out the evil dems and rhinos. Trump must win.

And when democrats begin to think for themselves and quit following the leader, things may also change.’

But alas, pigs will fly before a democrat thinks for themselves.

I hear you. I just don’t think Trump is the man for the job next time around. I thought he was a great President. He got the ball rolling to bring America back and think about America first.

He can be the torch/beacon in the night for the party and the next guy/gal to carry on with what he started. It just can’t be him if the cause is to be successful, IMO.

If we allow
Democrats to cheat to control who can TALK in America this country is over. They silenced him, they cheated, they are trying to put him in jail, he needs to win, we need a sweep and we need to burn this thing down.

You are preaching to the choir. I don’t need convinced of what you are saying. I know it’s true. As much as I think Trump was a great President, I think he would do more to divide an already seriously divided nation if he were elected again. I would love for him to be President again, but I know what would ensue if it were to happen… more of the same bullshit from the Left as the last time… and probably worse. It isn’t worth it, IMO. It distracted from what could have been/should have been a monumental rise in all things American.

It needs to be someone with Trump’s attitude, strength and conviction… with a lot more tact.

Trump is to divisive.

I suspect that if a republican wins, regardless of who it is, the left has it’s game plan which is the same as when trump was in office.