Why Kamala Harris Will Be the Democratic Presidential Nominee

Interesting piece by Epoch times that connects Progressive political organizers to Marxist ideology! Now they have chosen #heelsupharris to be their next champion! The female version of Obama!

Have a look, this video is jam packed with useful information! I’m not so sure. There are still a lot of democrats that haven’t jumped off of the far left cliff and for many reasons I truly believe Tulsi Gabbard may yet prove to be the dark horse candidate.

Scary part is that if Tulsi wins the nomination I’m afraid she’ll have a better than even chance of defeating Trump in November and she’ll have some long and wide coattails if she does.

The problem with Tulsi is whether she will be in the next debates to make a difference! I agree though, she does pose as a real threat to Trump in terms of getting to the debate and being able to articulate her case convincingly! But you remember what Carville said when Clinton defeated Bush 1 right? “It’s the economy stupid”! With the economy performing so well, I really don’t think Democrats will be able to overcome that narrative to unseat Trump!

The danger with Tulsi is that she’s a much more likable character across the board and both a veteran and still serving in the reserves. She could appeal strongly to a lot of independents and quite a few of the republicans who can’t quite stomach Trump in spite of the economy.

If her last two debate performances are any indication she could seriously threaten for the nomination because everyone else is racing to the hard left leaving the core of the party behind.

Once Biden is out if she’s still in I strongly expect her to take much of his support.

I was intrigued by Tulsi and cooled off after I saw some negatives on the Second Amendment.

She isn’t the worst gun grabber running, but I think worst that Obama or even Biden.

She does have the charm and charisma it takes to run, unlike the rest of the D field.

Kamala is stone cold in terms of personality. I don’t see her getting much national support now, 2024 or beyond.

U.S. Senator Kamala Harris is NOT a ‘natural born Citizen‘ of USA – NOT Eligible to be President and Commander-in-Chief of Our Military per U.S. Constitution by: CDR Charles F. Kerchner, Jr. (Retired) – 11 Aug 2018
Both of Senator Kamala Harris’s parents were not U.S. Citizens when Kamala was born. Kamala Harris was born to a Jamaican Citizen father … and to a Citizen of India mother…
[http://www.kerchner.com/documents/pol/385966818-Kamala-Harris-Not-a-Natural-Born-Citizen-of-USA-to-Constitutional-Standards.pdf](http://Why Kamala Harris is NOT eligible) 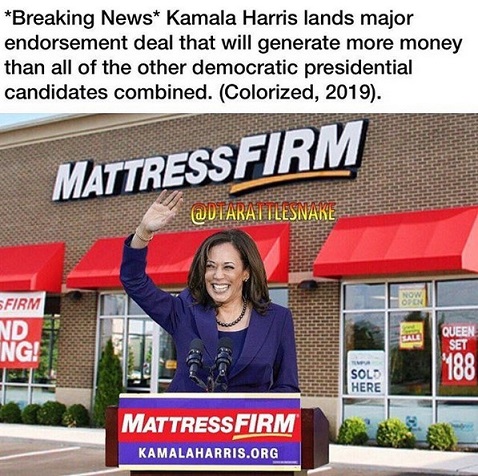 Who is going to enforce this? Why has this issue not been brought up before by other media outlets? Other sources I had read that indicated her Father was a natural born citizen so who knows!

I hope you are right and agree with you on Tulsi, besides she is easier on the eyes than #heelsupharris!

The video in the OP is very informative as to why she might succeed in getting the nomination as there is an organisation pushing her name on the ground game! The more important aspect is to focus on the players behind the scenes who are known Marxists! They IMO are the ones that present the most danger to our country and need to be shown the spotlight!

Both parents must be U.S. Citizens (jus sanguinis) and the child must be born on U.S. soil (jus soli).

Actually only one parent needs to be a US citizen. See Obama!

Well, the law is not specific enough and is the reason why people like Harris are running! If her Father is not a natural born citizen then there might be a case where she can be challenged on that particular issue, but from what I read her Father was born in Jamaica Queens NY. I could be wrong though!

Not Queens, NY but the nation Jamaica in 1961. The parents do not need to be natural-born citizens at her birth, only citizens.
There are five citizen types mentioned in the U.S. Constitution. A “natural born citizen” is one who is a citizen sans any legal requirement bestowing citizenship, i.e. a born citizen, a naturalized citizen.

So what you are saying because she was not born on American soil then that disqualifies her? If so who is going to challenge this on legal grounds? DOJ? Who?

Because she is an “anchor baby” and her parents were not U.S. Citizens when she was born, she is no eligible.
0bama could have been born on the steps of the Lincoln Memorial and still not be a natural born citizen, if as he claims, B.H. 0bama Sr. a legal resident not a U.S. citizen, is his real father.

The Obama issue of who his parents were and where he was born still persists as a controversy today! How can she be a anchor baby if she was not born on US soil?

Harris was supposedly born in the U.S. I did not intend to argue she wasn’t.

Oh ok, well if that is the case then this argument is moot because her being born in the US automatically makes her a natural born citizen!