Why Doesn't The Entire Civilized World Rally Against North Korea?

The country is a nightmare; the human misery unending; and yet the world stands back. Simply stop all aid cold. Then give them terms. Steps must be taken. The civilized world should hang it’s head in shame. The entire ruling family is and has been psychotic. If Kim Butt Fuc is greased, who takes over? History has shown us, evil people can be and are eliminated. So what’s taking so long? The 70 year mind set from 70 years of relentless brainwashing would be a challenge.

Assassination of a dictator may be the only way to effect change in a country where a repressive police state prevents any possibility of internal opposition. Cowed populaces need a signal in order to find the courage to campaign for change. What do most people under the thumb of a dictator have in common? THEY ARE UNARMED. As far as that fat little toady who runs the show in North Korea; it will take too much time for his arteries to clog, and blow a ventricle. By then another dictator will have been groomed. Proably a few already waiting in the wings.

NK is China’s bargaining chip . They go out of control and the world runs to China to get them back in line again AT A COST !!

I have a different take on North Korea. I think Kim Jong-Un is actually a big fan of the West and the United States in particular. He grew up going to fancy boarding schools in Europe and is obsessed with American video games, music, sports, and entertainment. I think he likely has an incredible deep state that he has to take on in his own country in order to open up North Korea for business. I think it’s going to happen but it’s going to be ugly. If he looks like he is deviating from the plan, then the military would likely remove him. He probably needs to build up alliances and rule with an iron fist in order to make this happen… but I honestly think he wants a huge payout from the US and assurances on trade. I think if somebody else stepped in and took his place conditions would get worse. He genuinely seems to like Trump and wants something to happen with the US. If I were him I would be waiting on Trump’s reelection to make sure that whatever deals they have worked out can get done.

North Korea is a constant source of heartburn for the Chinese. They only keep it around because it’s the last bastion of Soviet-style communism that they admire, yet know better to practice.

To be perfectly honest, the North Koreans appear to be living more wholesome, natural, and fulfilling lives, compared our lives in the West.

That’s actually a really interesting perspective. I can’t see how anyone who grew up with a taste of life in the US or Europe would want to not have that in his own country. I also agree that Kim seems genuinely excited every time he meets up with Trump but the old guard probably has got him on a tight leash. Trump probably recognizes this and that’s why he’s not deviating from trying to bring North Korea to the table.

The country is a nightmare;

How about minding our business for a change?

Jim - NK isn’t our problem, any more than the middle east is??

I’ll bet one thing - that the citizens of NK towns and cities can walk the streets in safety every day and night of their lives?

It’s not the common man they have to fear. One wrong word about their great leader, and they are sent to Hell. Most of the population is underweight; including the military. Many NKs live on a starvation diet, while their bloated leader & company shovel down the food. A country that survives on handouts. The worst part of the problem is 70+ years of relentless brainwashing.

But rule with an iron fist works for the greater good Jim, don’t you agree? We may not understand it, but it’s an undeniable fact, and it’s proved time and again whenever we snuff out dictators. I’ll bet there’s no opioid crisis in NK, nor even any crime to speak of, so it looks like we’re the ones who need to get it right?

If the greater good results in human misery, it ain’t so great. Now, opiates; well who makes the choice to use them? With all our shortcomings, all our warts, I’d rather live in the USA.

North Korea is a satellite state of communist China.
When the North Korean nuke program got out of hand, China (along with Russia) threatened a regime change in Pyongyang and Kim had to obey.

I was surprised to see many North Koreans working in Vladivostok recently.
Vladivostok is Russia’s major city in the Far East and is only a few hours drive from the North Korean border, so North Korea is not entirely closed off.

As the recent movie, PARASITE, shows, South Korea isn’t that great either, in terms of corruption and the gap between the rich and poor.

I guess any areas outside the US & our territories are not our problem. I’m for bringing our troops home, and allowing them to clean up the illegal mess, guard our borders, assist law enforcement, help improve infrastructures. It does begin at home.

the North Koreans appear to be living more wholesome

Yeah if starving is your thing . 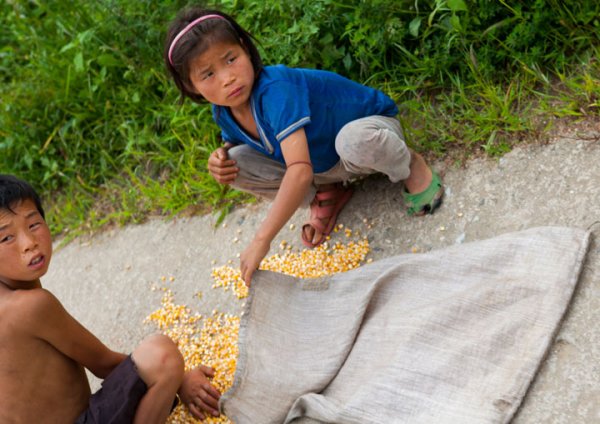 Is North Korea starving and killing its own people? Here’s the evidence

North Korea is a satellite state of communist China.
When the North Korean nuke program got out of hand, China (along with Russia) threatened a regime change in Pyongyang and Kim had to obey.

Perhaps, but you can’t prove that. Nor would the chaos of regime change in that country, on China’s border, be welcome.

It’s more likely that KJU was summoned to China to be instructed on how to play the foreign policy novice and idiot Donald Trump, just as he masterfully did while continuing his missile/nuclear program.

And now Trump blames Bolton for his failure to secure a nuclear agreement with NK.

I guess any areas outside the US & our territories are not our problem.

Militarily speaking, that is most correct. As to your desire to bring our troops home. That was a key campaign promise that Trump has broken.

North Korea suffered a famine, and they were able to get over it alone, unlike African countries like Ethiopia. North Korea has developed nuclear weapons and has put several satellites in orbit. They have managed to keep their culture intact. Their crime rate is also incredibly low because the penalty is generally death for most things. In many respects, they are doing a lot better and are a lot more advanced than hundreds of other countries that we stupidly dump money into.

Oh I have been saying this for years, the entire free world should be ashamed, including the USA. It would actually be more humane if the NK prison camps and nuke facilities were just bombed to oblivion causing instant death because the Korean people live a life of cruelty, suffering, and misery their entire existence and most die horrible slow and torturous deaths. We don’t let animals suffer but the world has certainly allowed the N. Koreans to suffer. It’s shameful.