Who Blew Up the Recreational Vehicle in Nashville Tennessee?

US News & Politics
antifa, trump, democrats
Barsolei December 26, 2020, 6:54pm #1
Who Do You Think Blew Up the Recreational Vehical in Nashville, TN?

Here is a good article (by Roger L. Simon) , suggesting that it may have been intended to begin a new civil war:

It was unseasonably cold as my wife, daughter, and I emerged from a downtown Nasvhille restaurant where we had been enjoying a Christmas Eve dinner.

All was quiet. That rarity in the South, a gentle snow, was drifting down, reflected in the Christmas lights of the neighboring buildings. It was almost magical.

You could forget for the moment the unremitting misery that was annus horribilis 2020, particularly bad in my adopted Music City home that suffered not just the pandemic but a destructive tornado in March.

Roughly 6:30 the next morning, Xmas itself, only a few blocks away from where we ate, the massive blast occurred that most of you have seen pictures and videos of today.

We had driven straight past the location on the way home, right down Second Street.

Needless to say, our Xmas plans have shifted to a day in front of the television watching local news. The FBI, the ATF, Metro Nashville Police and various other constabulary, foreign and domestic, we were assured, were on the case.

Unsurprisingly, no significant news was forthcoming, other than that three people were lightly injured and a police officer had had his hearing impaired by the blast that was evidently heard for miles—but not by me. I was sound asleep.

More importantly, nobody seemed to know whodunit? Or if they did, they weren’t saying.

Nevertheless, something popped into my head almost immediately, the proximity to the so-called Batman Building (for its resemblance to the original), the tallest building in Tennessee and currently the regional headquarters of AT&T.

What I hadn’t realized was that a shorter reddish building—almost determinedly anonymous, without signage and largely windowless—also belonged to AT&T and was described as filled with “computer and switching equipment” by the not terrifically technically informed newscasters.

That building was literally at ground zero for the blast zone. The large RV with the obviously copious load of explosives apparently had been parked directly in front of it, a huge hole blown in the building’s side.

Two facts… or were they factoids… quickly emerged.

One, whoever committed this crime, had given warning of the explosion via a loudspeaker or a megaphone, telling everyone in range what was coming and to get out of the area.

This went on for about thirty minutes, even to the point of a countdown to detonation once the fifteen-minute warning was reached.

This was subsequently corroborated by a video recording and gave credence to the theory that whoever was responsible wanted to avoid killing or hurting people. The timing of early Christmas morning also made it extremely unlikely pedestrians would be in the area.

The second fact or factoid that emerged was fleeting—the brief mention by one of the newscasters of the accusations that former NSA analyst Edward Snowden had made about AT&T.

This one sent me scurrying to the internet. Back in October 2016, Anthony Cuthbertson wrote in Newsweek under the title “AT&T Spying Program is ‘Worse Than Snowden Revelations’”:

“A for-profit surveillance program carried out by telecommunications giant AT&T was more serious than the 2013 NSA spying revelations, according to digital rights advocates.

“AT&T’s Project Atmosphere was unveiled Tuesday by the Daily Beast to be secretly selling customer data to law enforcement agencies for the purpose of investigating everything from murder to medical fraud.

“‘AT&T customers are outraged but this affects everyone,’ Evan Greer, campaign director at Fight for the Future, tells Newsweek. ‘AT&T went far beyond complying with legal government requests and actually built a powerful data mining product to sell our private information to as many government agencies and police departments as they could.’”

For more The Intercept has an article — “The Wiretap Rooms—The NSA Has Hidden Spy Hubs in Eight Cities” that includes the following:

“‘The NSA considers AT&T to be one of its most trusted partners and has lauded the company ’ s ‘ extreme willingness to help.’ It is a collaboration that dates back decades. Little known, however, is that its scope is not restricted to AT&T ’ s customers. According to the NSA ’ s documents , it values AT&T not only because it “ has access to information that transits the nation,” but also because it maintains unique relationships with other phone and internet providers.”

So back to whodunit…

Even with the warning, considerable collateral damage to businesses on Second Street and close by was inevitable, as if they all hadn’t had enough already.

Nevertheless, the person or persons who did this act—likely experienced with explosives in some way—ignored that potential destruction.

They clearly wanted to send a message he, she or they believed was of too much importance.

At this point anyway, that message appears to be that we live in a surveillance state from the likes of AT&T and our government and that that must end for the survival of our republic as it was conceived.

Our liberties no longer exist. China may be trying to take us over, but we’re already halfway there ourselves.

I happen to agree with that, though not with the method in this case. That collateral damage, and the possibility of even worse, is too much for me,

But what is the method?

Given how divided our country is, what happened in Nashville this Christmas morning may have been the first salvo in a second civil war.

Just for the record, Fort Sumter is only eight hours’ drive away.

Of course, there is always the possibility that one side is impersonating the other in this action—that it is a false-flag operation.

But if so, it’s even more a license for civil war.

Whose statues will be torn down this time?

One more POSITIVE thing for the lovers of the music in Music City: The Ryman Auditorium (aka the “mother church of country music”) was not damaged.

I initially voted for Dominion but after thinking about it I don’t think that was done to cover up voting fraud so I changed my vote to BLM. Trump has the entire FBI and Dept of Justice to investigate voting fraud and if there was anything significant there he would have shown evidence which he hasn’t been able to do despite filing 40 cases.

My thinking about blowing up the AT&T/Bell South building is that by disrupting the police response and data gathering they can set the stage for a larger armed conflict in Nashville to try to extort improper slavery reparations for BLM and solidify control over the city for progressives. The idea of defunding police also did this and the Nashville Democrat Mayor recently laughed about the explosion which shows me he is happy about it. Further, Nashville is in a red state area so it wouldn’t be an attractive target for militant white nationalist groups-they would have targeted the courthouse or Democrat headquarters. The main aggressors are BLM/Antifa so I think Democracy Alliance (centrist democrats funding progressives militant groups) and BLM is behind it because it was a professional job with the computerized warning in english by an Antifa woman (I’m surprised it didn’t say “Have a nice day” and then blow up), well done explosives of the RV and didn’t do any damage to tourist attractions in downtown Nashville. I expect Trump to blame BLM soon publically.
Get Ready For A Surprise

Trump has the entire FBI and Dept of Justice to investigate voting fraud and if there was anything significant there he would have shown evidence which he hasn’t been able to do despite filing 40 cases.

Which is why nobody cares who he blames the bombing on. It’s clear he doesn’t even care about this bombing, he’s consumed with finding a way to overturn the will of the American electorate…

I wouldn’t say nobody cares about it. Trump hates the CIA because he’s a russian agent working for Putin (numerous examples). It won’t come from him but will be from FBI and he will retweet it so it will have credibility. However Biden’s stance against violence and media contacts will shield him from the disclosure that Democracy Alliance is funding the progressive terrorist groups (Antifa/BLM) as a way to discredit the progressives which so far has been effective. BLM has lost a lot of popularity and the progressives have been criticized for it by the centrist democrats.

Trump is anti law enforcement, he dogs the FBI/DOJ, so I seriously doubt he’s going to lend credence to anything they say…

And as I said, he doesn’t even care about this bombing…

Exactly, which is why if they find evidence that Antifa is behind it people will take it seriously.

But they won’t, antifa didn’t do this bombing…

I disagree. The chief fundraising person at BLM served time in federal prison for robbing an armed car and bombings to fund a new black racist country out of the USA called New Afrikka. Their NY State leader advocated revolution through blood and bullets. They are terrorists and I predict a lot more terrorism in the next few weeks. Progressive democrats are fine with this as they are worried about worsening climate change and are frustrated that America didn’t accept their politicians and propaganda in the last election cycle. They are getting desperate.

Democrats are quite pleased with the outcome of the last election…

And I thought you were blaming the Nashville bombing on antifa? Now it’s BLM…

I’ll wait to see what the FBI, the people who are actually investigating it say…

Antifa and BLM work together.

Democrats are not happy with the last election. They didn’t take the Senate.

Party centrists blame leftwing candidates such as Alexandria Ocasio-Cortez for scaring off voters](https://www.ft.com/content/e922ddea-6665-4231-89a3-ffdbfd0fc009)

Yeah, Biden’s a moderate so of course he’s going to face trouble with the left wing of his party. Not unlike similar problems Republican presidents face…

And the senate is yet undecided, though it willl likely remain with republicans. Americans tend to favor divided government…

Not sure you know what that means lol

Ok, new information. Looks like some crazy IT tech guy paranoid about 5g did it. Come to think about it had BLM did it there probably would have been some type of pro-BLM message attached to the RV. That’s usually how they operate. 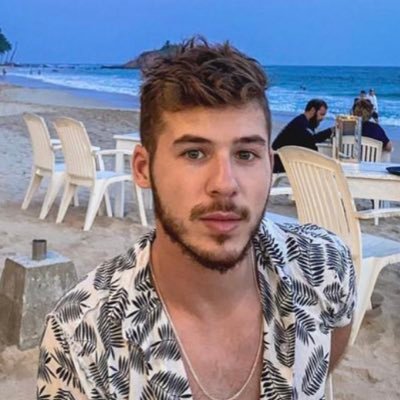 ⚠️NEW FOOTAGE OF MIAMI SHOOTING⚠️ People run for cover after shots are heard. This is near the American Airlines arena on the Miami waterfront. #miami #florida #shooting #BREAKING #police https://t.co/zEJvviM2Lm
montecresto1 December 27, 2020, 8:18pm #17

Ok, new information. Looks like some crazy IT tech guy paranoid about 5g did it. Come to think about it had BLM did it there probably would have been some type of pro-BLM message attached to the RV.

Well I knew you were jumping the gun accusing antifa and BLM of the bombing.

In reality, it was another conspiracy theorist nut job. Not unlike what we see here at PB regularly. In fact, I’m pretty sure we have threads here decrying all manor of conspiracies about 5G…

Trump just really brought the crazies out of the woodwork…

I think we also had someone claiming a conspiracy that Biden/democrats were behind the bombing because they wanted to prevent AT&T from auditing Dominions ballot processing machines. This is what Trump has done, he’s brought the conspiracy theory people out front…

This was sponsored by tide products lol 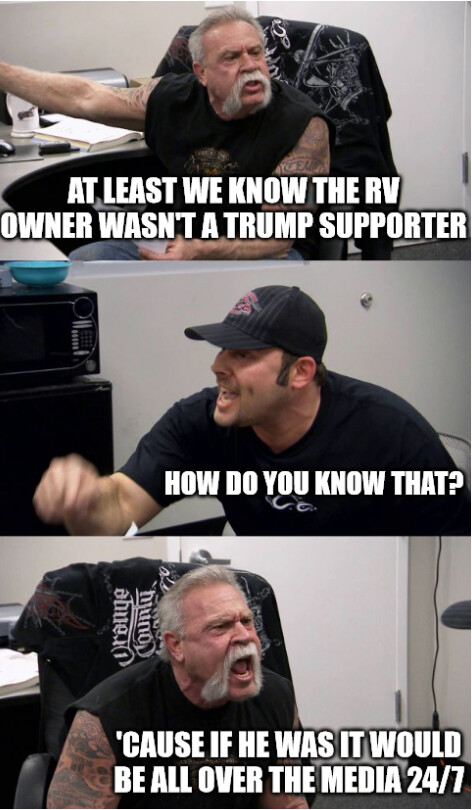