White People's Lives In 1957 America. What A Time It Was!

I turned 14 in '57…got my driver’s license the next year…my dad drove a '57 Dodge, my mom a '56 Plymouth Fury…both with push button shift…on the dash. So dude. I guess you want to go back to white only lunch counters and lynching for those who don’t obey.

In about that same year, my working class mom and dad put down the first payment for a 3 bedroom brick house in a nice neighborhood.

Not at all! That '56 Fury I mentioned was the car I used to take our dearly beloved maid, Jonnie Lindsey home one afternoon.

I had the car running when she came out of the house. She got in the back seat. I told her to get in the front seat. She apologetically refused. I insisted. She refused again.

I turned off the ignition and said we weren’t going anywhere until she got in the front seat. Finally she did.

We got several leers from white people on the way to her house.

I wish I could have grown up in that time. Technology was good enough to meet everyone’s needs but wasn’t so good that it did everything for everyone. We just should have kept things static culturally and technologically at that time. Plus…the cars looked really nice. Houses were much more affordable too and everyone seemed to take care of their homes.

Why was it a big deal for Jonnie to sit up front with you? It almost seems like by her sitting in the back you would be something similar to her chauffeur.

No. It’s more like being allowed to sit in the front of the bus.

It’s an historical thing that you people would not understand.

And you could ride your bicycle with your 22 slung across your back. Or walk to school. I was only 3 then but that kind of freedom was in effect 10 years later too.

It’s an historical thing that you people would not understand.

That’s a stretch. I’m sure it’s not too difficult to understand it would just be nice to have someone explain the nuance.

Rosa Parks. Not really a nuance.

She got in the back seat. I told her to get in the front seat.

Maybe so, but she was still black and your slave, sorry meant maid - freudian slip.

Characterizing your mischief as a Freudian slip is disingenuous…yet quite normal for you.

My grandchildren will never get to grow up in the America I grew up in. Almost magical. Freedom, in my town, people did not lock their doors. Neighbors took care of each other. Vehicles were simple & the car owner could do almost all the service. Our country has gotten out of control. Do I believe in technological advances, absolutely; but I do not need a new cell phone every 4 months. Planned obsolescence? Low quality items. Just a throw away society. Best to be a minimalist, and actually take the time you’ve been granted, and use it to live. Too many people actually believe an unending flow of material things can make them happy. It’s amazing how content you can be, if you believe - understand, “enough is really enough”. When you think about it, enough is a feast. I just watched a neighbors house being cleaned out. Three 20 yard dumpsters. A lifetime being hauled to a landfill. Sad. 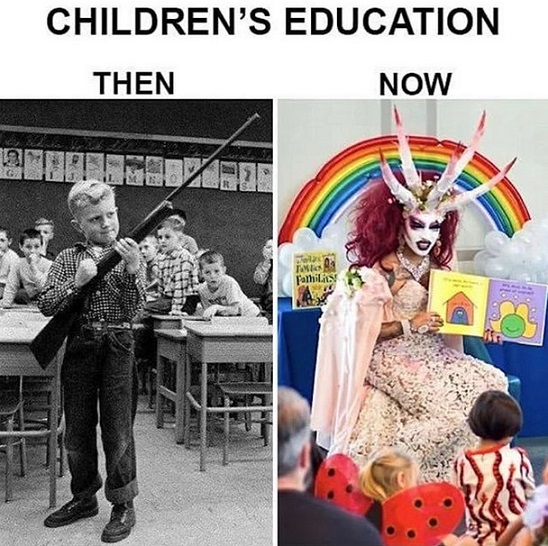 I took a 10 gauge muzzle loader to 3rd grade show and tell.

Ummm… did these “women” that you encountered also have deep voices and a rather hefty grip? In spite of the problems blacks had prior to 58 I can show you a lot of data suggesting that in numerous ways there lives were much better than they are today starting with crime and out of wedlock birth rates along with divorce rates.

Until the “War On Poverty” there was nothing in America stronger than the “Black Family”.