Late last night on Newsmax, a lawmaker went on Michelle Malkin’s show and unveiled a treasure trove of evidence proving undoubtedly that the DNC colluded with Smartmatic and Dominion voting systems in a nationwide effort to rig the election for Joe Biden. Democrat officials in big cities of swing states installed software to pre-allocate tens of thousands of votes to Joe Biden, distributing them at intervals throughout the night. Everything Giuliani and Powell have been saying has been true, and now is proven beyond a shadow of a doubt. We have the documents. Watch the stunning revelation: 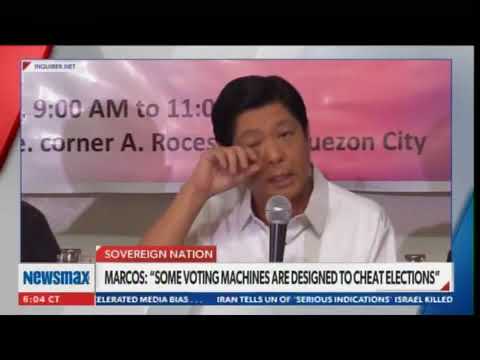 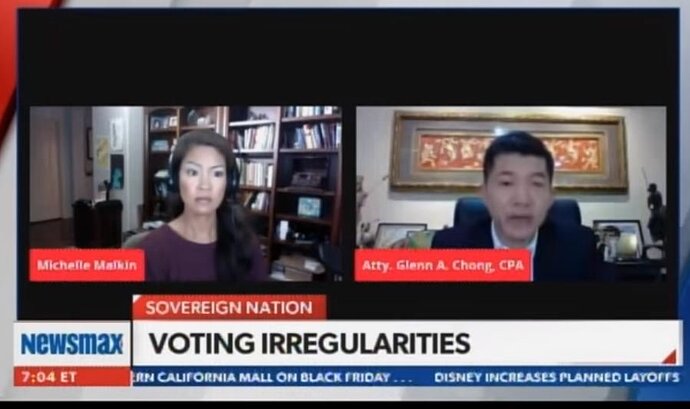 Where is the evidence? All I see is some Asian dude saying the same thing happened in his Asian country. Where are the documents?

Nothing will come of this and it will be forgotten in a week. If there was any proof of actual rigging Trump would be interrupting all TV broadcasts announcing the arrest of those responsible.

This demonstrates nothing. It doesn’t even have anything to do with the US. You people are grasping at straws and you look pathetic.

What are you afraid of?

I’m not afraid of anything. Trump lost the election and will be removed from the White House at the end of his term. Nearly all of the nonsense claims of voter fraud have been thrown out of court.

So you really want republicans showing up to your state overturning your government conquering you. Because you cheated? Just accept trump won

There was no cheating and there is no evidence of cheating. I’m pretty sure that every single stupid case that the dumbasses on the Trump legal team have already been thrown out because they presented ZERO evidence

The media is not covering how younger voters are trending favorably to conservative ideas. The more we learn, the more we can clearly see this election was stolen.

You absolutely cheated, no one voted for joe… way to many things that make you say hmmmm in 4 states…

Of course he cheated and the irony of people claiming there is no evidence are same the people who claimed Russia interfered with the 2016 elections. Funny how that works huh? No wonder why more younger people are wising up to not vote Democrat, they are disgusted with the double standards of them not to mention being hypocrites.

The disgusting fat sows will keep on squealing like the swine they are!

Whistleblower is a nut job.
And the guy at DHS that trump fired for declaring that the election was fair, has received death threats from deranged Trumpers and trumps campaign attorney says he should be killed…

Biden will be sworn in on January 20th…

It proves nothing, which is why over 30 lawsuits in 5 states have been tossed out or withdrawn by Trump’s embarrassing legal team…

Lol trump won 85% of the counties in America. Biden is done

NO cheating? So you think Biden got 10MM more votes than Obama? You think that Texas had a 25% increase in votes from 2016 and it’s just normal? You think that Biden got people SO excited that he saw a 37% increase in votes over Hillary in Texas? You think that Trump was leading by 120K votes at 2 AM in Wisconsin with 92% reporting only to lose that lead to Biden over the next 4 hours where Biden got nearly 80% of the votes and the reported increased to 95%? Seriously? Trump is leading at that point 52.1% to 47.9% and all of the sudden Biden lands almost 80% of the votes? Bullshit. You’re telling me that we had the highest voter turnout since 1900 with these two turds? Bullshit. If you don’t see the fraud, you’re wearing double eye patches and plugging your ears.

You bet, there is no voter fraud when you don’t look for it.

But when you do, it becomes obvious the democrat party is beyond corrupt.

These morons want me to believe that Biden got people so riled up that Biden saw a 35% increase in votes over Hillary in 4 years at the same time that Trump’s votes went up by 25%? That looks like algorithm math, not legitimate additional votes. We went from 9MM votes cast to 11.3MM votes cast in 4 years? Our population increased by 5.7%, yet votes jumped by 25.81%? Not even feasible. California jumped by 22.4% of their vote total from 2016. Michigan by 15%. Total in the US, the percent of registered voters that “voted” was between 66.4% to 72.1% (wiki). To put that into historical perspective, the last time we saw a voter turnout of over 66% was 1900 when women and blacks couldn’t vote. The last time it broke 60% was 60.7% in 1968 at the height of the Vietnam War. Even in 2008, when we had a historic candidate, we only reached 57.1%. 2016 saw 59.2% and I still suspect voter fraud then as well, mainly because the Democrats spent 4 years talking about it… sounded to me they were pissed that they cheated and still lost… so take it to the next level and we could end up with 72% of registered votes being cast nationwide? With Trump and Biden? I can see excitement for Trump, he had rallies full constantly but BIDEN? That SOB couldn’t fill a venue if he was giving away crack.