“Admiral Richard E. Byrd warned today that the United States should adopt measures of protection against the possibility of an invasion of the country by hostile planes coming from the polar regions.”

Hostile planes coming from the South Pole?
What was he talking about?

Russians knew that the US armada limped back home after a crushing defeat.

Operation Highjump happened.
You can’t deny it.
US Navy was defeated in a matter of minutes.

Of course there’s absolutely no facts to support such a claim but that certainly isn’t an impediment for you.

There was zero evidence of any battle damage to any of the ships or aircraft that returned.

Who said it never happened? They could not have returned from a mission they never went on.

None of the returning planes or ships however showed any signs of battle damage.

There is absolutely no evidence of any battle during the operation.

This overlaps with the previous video.
You have a short memory span anyway, so here it is.

More conspiracy nut BS isn’t evidence of anything other than your affinity for insane conspiracy and UFO theories.

There was no evidence of any battle damages and only three of the crew were lost when their DC 3 crashed.

The Russian documentary says a destroyer was also sunk.
Sorry, they are more credible.

Why would you send an aircraft carrier and warships accompanied by submarines for an antarctic “exploration”?
Fishy, fishy, fishy

More credible that who? They claimed a destroyer which never existed was sunk and that pretty well sinks their credibility on the spot.

You send and aircraft carrier because it is a mobile landing strip and can carry thousands of tons of equipment.

They also had no idea what kind of potential Nazi resistance might be met due to all of the rumors of a secret Nazi base being constructed there prior to and during the war as an escape for the Nazi Hierarchy in the event the war was lost.

Of course, there has never been any evidence produced to show such a base existed or that any Nazis had fled to it.

More credible than you.
Oh, by the way, the US achieved a glorious victory in Vietnam, if you didn’t know.

The entire compliment of men, ships, that departed on the expedition returned other than the loss of one DC-3 and it’s 3 man crew and there was zero evidence of battle damage to any of the ships or aircraft.

You are living a life in denial.
Not my problem.

There is a record in the US Naval Registry of every ship ever commissioned. The USS Murdoch never existed.

You feed on lies as long as they support your insane conspiracy nut/Alien theories.

“Admiral Richard E. Byrd warned today that the United States should adopt measures of protection against the possibility of an invasion of the country by hostile planes coming from the polar regions.”

Hostile planes coming from the South Pole?
What was he talking about?

He was talking about the great circle route from Easter Europe to the United States. The shortest air route is over the Arctic Ocean. That is why the DEW line was constructed in the 1950s … to detect an airborne attack from the Soviet Union.

" John P. Szehwach, a radioman stationed on the USS Brownson, gave testimony of how UFOs appeared dramatically out of the ocean depths. On January 17, 1947 at 0700 hours, Szehwach said:

I and my shipmates in the pilothouse port side observed for several minutes the bright lights that ascended about 45 degrees into the sky very quickly… We couldn’t i.d., the lights, because our radar was limited to 250 miles in a straight line.[Our Real “War of the Worlds"]

Over the next several weeks, according to the Soviet report, the UFOs flew close over the US naval flotilla which fired on the UFOs which did retaliate with deadly effects. According to Lieutenant John Sayerson, a flying boat pilot:

The thing shot vertically out of the water at tremendous velocity, as though pursued by the devil, and flew between the masts [of the ship] at such a high speed that the radio antenna oscillated back and forth in its turbulence. An aircraft [Martin flying-boat] from the Currituck that took off just a few moments later was struck with an unknown type of ray from the object, and almost instantly crashed into the sea near our vessel…. About ten miles away, the torpedo-boat Maddox burst into flames and began to sink… Having personally witnessed this attack by the object that flew out of the sea, all I can say is, it was frightening.”[Our Real “War of the Worlds"]

There is a major problem with Sayerson’s quote. There has been no torpedo boat named Maddox in the US Navy. In the Russian documentary, the incident described by Sayerson (misspelt Sireson) refers instead to the destroyer “Murdoch.” There was, however, no destroyer named “Murdoch” active in the US Fleet in 1947. Instead there was a destroyer named “Maddox” (DD-731), but it did not serve in Operation Highjump. In fact, the USS Maddox was the destroyer fired upon in the Gulf of Tonkin incident of 1964.

According to Frank Joseph the USS Maddox was “either a torpedo boat, or torpedo-carrying destroyer.” He goes on to explain what may have happened to the Maddox mentioned in the Soviet report:

A USS Maddox was indeed sunk by enemy action, but five years earlier by a German dive-bomber during the Allied invasion of Sicily. Actually there were at least three American destroyers known by that name (DD-168, DD-622 and DD-731) all of them contemporaneous. The US Navy has long been notorious for falsifying the identity of its ships and re-writing their histories if they embarrass official policy…. So too, the “Maddox” cited by Soviet espionage was similarly consigned to an official memory hole.[Our Real “War of the Worlds"]

If Joseph is correct, then it is very possible that a USS Maddox was destroyed during Operation Highjump, and the US Navy changed official records to hide this."

In 1947, the US and the Soviet Union were still allies

Did US Navy battle UFOs protecting Nazi Antarctic sanctuary in 1947?

An extraordinary 2006 Russian documentary was recently translated into English revealing new information about a US Navy Antarctica expedition in 1946/47. Originally scheduled for a six month perio…

There is no possibility that a ship that never existed was removed from the Naval Registry.

There is no record anywhere of a USS Murdoch.

There isn’t a verifiable fact anywhere to support this insane theory.

Of course history shows that to be completely false.

In 1946 the US and European Allies were already working on containing the Soviet Union and the “Cold War” officially began in 47. 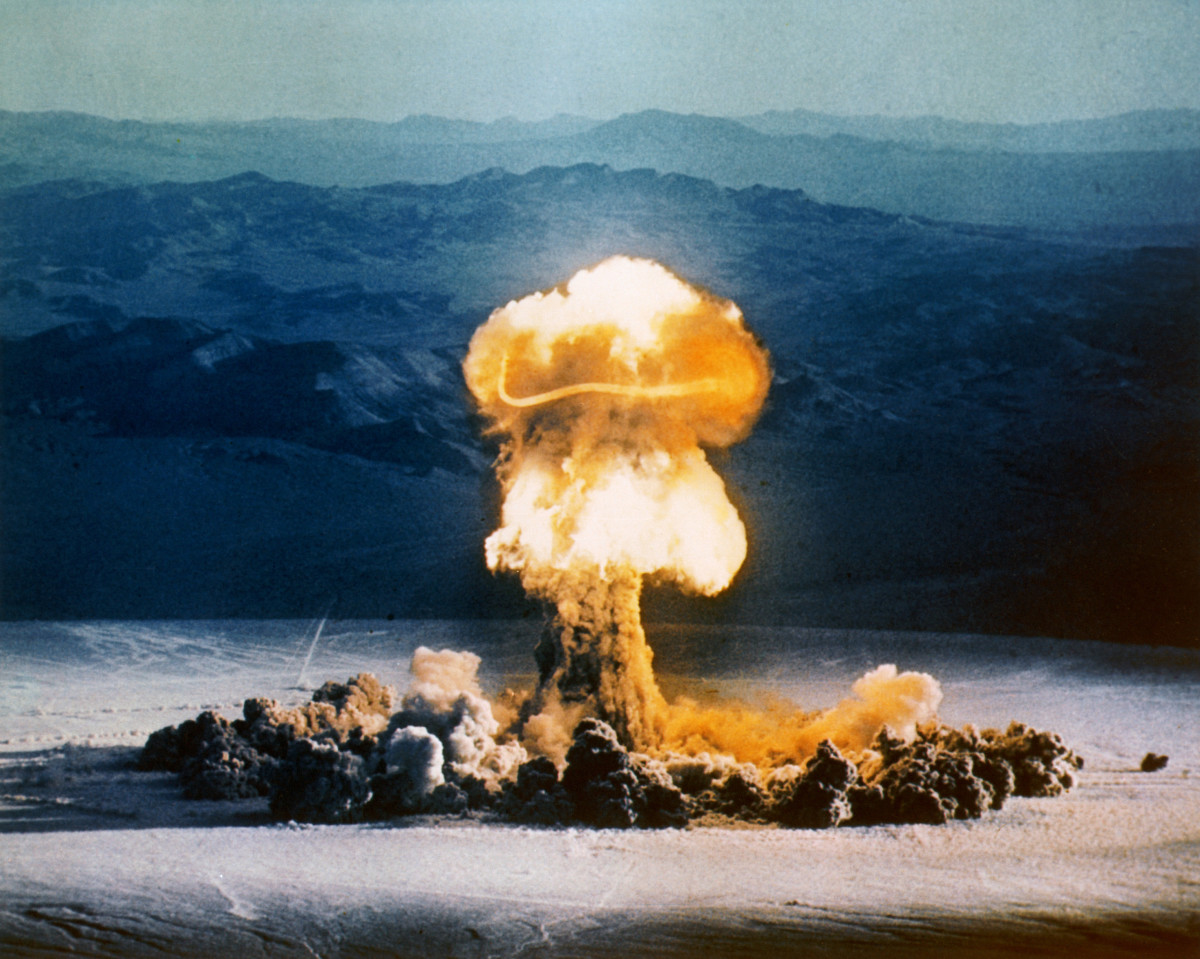 During World War II, the United States and the Soviet Union fought together as allies against the Axis powers. However, the relationship between the two

Actually, We Did Win The Vietnam War
The American Left Snatching Defeat From The Jaws Of Victory:

The memory of the Vietnam War is studded with occasional misinformation and errors. This list of Vietnam War Facts, and statistics helps set things right.

Fact: The American military was not defeated in Vietnam. The American military did not lose a battle of any consequence. From a military standpoint, it was almost an unprecedented performance. General Westmoreland quoting Douglas Pike (a professor at the University of California, Berkeley),
a major military defeat for the VC and NVA.

The Left Has Hated America, Worked Against It’s Success
And Have Been Traitors To The United States For A Long Time

Back To Topic:
The Existence Of UFO’s Debate Is Over
The Conversation Now, Is What They ARE
Since Mechanical Flesh And Blood Interstellar Travel
Is Not Only Impossible But Pointless
https://www.nasa.gov/hrp/5-hazards-of-human-spaceflight
(Not The Bookmark I Wanted, But I’ll Look)
No UFO Has Ever Been Seen Or Detected By Any Means
Beyond Near Earth Orbit
So Now The Bigger Question Is Not Only What They ARE
But Where Are They Really FROM
Because They Aren’t From Across The Galaxy