What is unity? Can it be achieved

Unity is both parties working together. Obama called for unity and perdue a agenda excluding the right.

There are two problems with calls for unity. One is that they tend to be nebulous, leaving out what we are all supposed to be unifying around.

The other problem is that calls for unity can carry an expectation of unity, i.e., the belief that truly reasonable people can’t or shouldn’t disagree in good faith on matters of profound significance. This is how self-styled unifiers end up becoming high-handed and divisive (Barack Obama fell into this trap).

The media landscape is not as conducive to fostering and de facto enforcing a consensus as it was in the pre-cable, pre-Internet era of three broadcast networks. Attempts to impose a consensus via decisions about what content to allow and suppress on today’s social networks and websites won’t succeed. In fact, as acts of censorship directed overwhelmingly at conservatives, they will fuel a backlash that’s already well underway.

Then there is the issue of Impeachment that will certainly fracture any possibility of unity. Yes, Biden could stop the effort.

Biden is not going to pursue a consensus, bipartisan agenda, but a progressive one. That is his right. But almost everything he does unilaterally or pushes legislatively will inherently be anathema to the GOP.

With Trump exiting at such a low point, there will be temptation to ignore any lessons of his rise. That one of Biden’s first big legislative proposals is yet another “comprehensive” immigration reform of the sort that has failed repeatedly after mobilizing massive grassroots opposition on the right shows an impulse to learn nothing.

President Biden can do his part to lower the temperature of our politics, and raise the tone, simply by not stirring the pot every day. This won’t be transformative, but there actually might be some unity around the proposition that it will be a welcome change.

Sorry, there is no unity to be achieved. This country is full of people that understand what built this nation and idiots that like Socialism, despite the 100+ years of horror stories for all to see.

Give Trump a few months, his approval will work its way above 50%. The pollsters will lose interest in inventing negative polls to trash him soon. Seriously, why the hell would we even LOOK at those polls? They were as wrong as it gets during the general election, completely debunking their accuracy.

There is no unity. Remember, no justice, no peace. That’s what I was told all year.

Give Trump a few months, his approval will work its way above 50%. The pollsters will lose interest in inventing negative polls to trash him soon. Seriously, why the hell would we even LOOK at those polls? They were as wrong as it gets during the general election, completely debunking their accuracy.

Polls are nothing more than a media contrived narrative in order to put forth a false pretence.

You will be surprised, the media and left will continue to hammer away.

The latest effort us Amendment 14 to deny him the ability to run again.

trumputin will be dead or in jail before 2024 dum ass lies…your one of the best at it.

Remember that unity is a word. I doubt we will be able to explain the definition to our children for very much longer without telling them of days past.

Yeah, Obama offered unity and led by Mc Connell the republicans effort was to block everything he did and make him a one term president. Unity is a two way street.

Sorry, there is no unity to be achieved. This country is full of people that understand what built this nation and idiots that like Socialism, despite the 100+ years of horror stories for all to see.

America has been evolving from the moment the ink dried on our constitution, in no time a people’s bill of rights was added and the constitution has been edited 33 times and could use a half a dozen more corrections. The socialization of America has been as steady as our age. First people wanted the government to deliver the mail and build roads and bridges. The list of demands made by Americans have grown exponentially and the costs to meet those demands along with it…

Taxes are derived from the collective and the goods and services are distributed accordingly.

You guys routinely attempt to conflate that with communism despite the fact of America’s regulated capitalism.

It’s NOT going to change, Americans will demand more as always and the federal budget will increase to meet the demand. The only question is, will we cut taxes and borrow more increasing debt and running unruly deficits as we saw the last 4 years, or raise taxes in an attempt to pay for what we want/need…

Biden launched his first term as commander-in-chief by branding himself as the unifier-in-chief while aggressively pursuing a partisan progressive agenda promoting left-wing ideas of “social justice” after smearing two Republican senators as Nazi collaborators.

“To all those who did not support us, let me say this: Hear me out as we move forward. Take a measure of me and my heart,” Biden pleaded with the American people.

Less than two weeks prior, however, the “unity” president smeared Republican Sens. Josh Hawley of Missouri and Ted Cruz of Texas as Nazis.

Unity is just a word without definition.

“Watch what we do, not what we say.”
Richard Nixon

Applying that standard to Biden, we should ignore the unity talk because everything he has done leans far left.

Again, he’s entitled — elections have consequences. But knitting together a fractured America around a far-left agenda was never going to work. And Biden knows it.

In fact, his actions suggest the “Kumbaya” appeal is not directed at Trump voters or even the public in general.

It’s really a disguised call to the factions in his own party to stick together, to give him a chance. I’ll keep you all happy, he’s saying, just watch.

Biden kept Dems together during the campaign because everyone wanted to dump Trump.

Now that he’s won, he’s got to find other ways to keep the fault lines from widening. Early signs show he believes he can straddle the divide by staffing his administration with establishment veterans and party warhorses while giving the passionate far left early policy victories.

Their dogma lives loudly in the 25 or so executive orders the president signed as part of his promise to hit the ground running. He should have promised to walk.

Consider that just hours after the new president moaned in his inaugural address that “Millions of jobs have been lost, hundreds of thousands of businesses closed,” he deliberately killed more jobs in the energy sector.

The Keystone Pipeline XL project promised to offer valuable jobs to both Canada and Americans in Nebraska, until President Joe Biden revoked it with an executive order.

One executive order revoked the permit for the Keystone XL Pipeline, which snuffed out thousands of good-paying union jobs in Canada and the United States. The long-disputed project would have brought Canadian crude to Nebraska.

He halted new oil, gas and coal leases on public lands and water and rejoined the Paris climate accord, which is certain to be a massive jobs killer once he sets targets for reducing carbon emissions and enforces them with regulations. Naturally, the global climate elites cheered because, well, their jobs are secure.

Trump’s policies on the pipeline and fuel exploration, along with pulling America out of the climate pact, succeeded at creating jobs and achieving energy independence. By reversing those policies, Biden keeps his promise to do the opposite of Trump.

The effective campaign tactic is economically disastrous as a governing principle. It’s not even clear the politics will work for long in his own party if he keeps killing jobs before creating any.

History teaches that raising unemployment is a fast ticket to a short honeymoon.

There are other oddities as well. After months of trashing the Trump White House over its handling of the pandemic and the vaccine, Biden said Friday “there is nothing we can do to change the trajectory of the pandemic in the next several months.”

Lowering expectations is an old political trick, but his comment reflects a defeatist concession that can only deepen the nation’s funk.

Similarly, he said in his inaugural that America is both a great nation and systemically racist, which is hardly an uplifting message to a broad public. Then again, if you’re only appealing to wokesters and racial arsonists, the seeming incoherence makes sense.

Despite high unemployment and the pandemic, Biden invited Central American caravans to come on in. With a moratorium on deportations of illegal crossers, he made it certain the border will be flooded, and that criminals and the COVID-infected will be among them. His press secretary described the policy as contributing to “racial equity.”

Biden also signed a radical order letting boys compete in girls’ sports events if they identify as transgender. The practice already is causing an uproar and now Biden has put the federal government on the side of glaring unfairness.

He rejoined the World Health Organization, which Trump accused of obscuring China’s role in spreading the coronavirus. So Biden will spend upwards of $450 million a year for the privilege of being the WHO’s largest donor — and we’ll never get the truth about what the organization knew and when it knew it.

The conflicts and incoherence aside, the far left and media echo chambers swooned their approval of these and other measures, but that was predictable. The real test will come when Biden doesn’t have Trump to kick around anymore.

If Dems and some Republicans have their way, that won’t be anytime soon.

Impeachment 2.0 moves to the Senate this week when Nancy Pelosi transmits the House charge of “incitement of insurrection” regarding the Jan. 6 riotat the Capitol. While Biden has ducked questionsabout whether trying a former president is good for the country, his failure to object is all the answer we need.

He’s on board and why not? As long as Trump is the target, Biden can keep his coalition intact. Trump is the best uniter Dems ever had.

Indeed, with some Senate Republicans likely to vote for conviction, including possibly Minority Leader Mitch McConnell, a dethroned Trump is spurring bipartisanship in Washington.

Even if he is convicted and barred from public office, that won’t be the end of the Trump obsession. Pelosi, driven mad with hate, wants a commission to probe any Trump ties with Russia.

***At some point, however, the smoke will clear and voters will judge Biden on the merits of his own presidency. ***

For some of us, that time began the moment he took office. 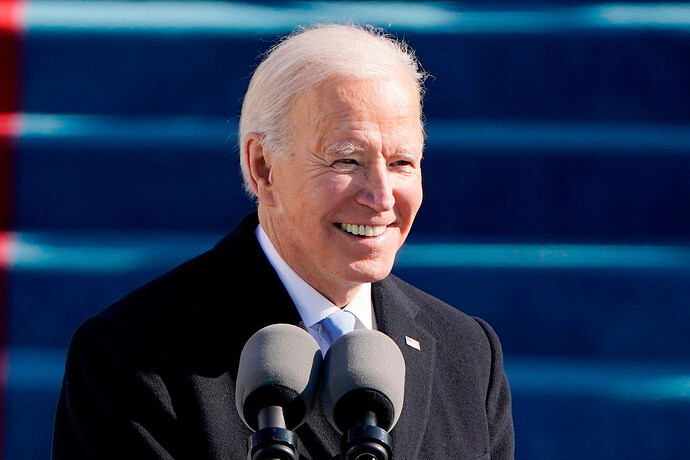 The joke survives the test of time and, under the circumstances, deserves repeating. As the late journalist Mickey Carroll told it, a suburban town with a population 90 percent Irish and 10 percent…

. Unity is a two way street.

You got that right. Time to experience a little unity for you.