And people wonder why there is so much divisiveness in this country.

A little background: My family is multiracial, my son is a person of color, and at 12 he’s soaking up knowledge about everything. His obsession in kindergarten was memorizing the names and order of the U.S. presidents. In fourth grade, he fell in love with “Hamilton.” These days, he’s fascinated by politics, if slightly dismayed by each new thing he learns ― and frankly, given what’s going down in The White House right now, I try to shield him from the worst of it. In addition to being a smart kid who likes to talk about politics, my son is friendly and chatty. Even as he sometimes displays a sullen tween attitude to me, he’s reliably courteous and poised with strangers.

So, it wasn’t a shock when my son responded gracefully to a very talkative seatmate on our return flight from Kansas City. My son’s seatmate was a middle-aged white woman (as am I), who told us she was from Topeka, Kansas, one of the towns my husband grew up in. As we taxied toward takeoff, I put on noise-canceling headphones and tuned out. My son and his seatmate kept talking.

I glanced over once or twice and noticed they remained in conversation. One time I glimpsed a scowl on my son’s face, but figured if he needed rescuing he’d try to get my attention.

After we landed, on the way to get our luggage, my son was uncharacteristically quiet. “Mom,” he finally said, “that woman I was talking to? She’s a Trump supporter.”

“I brought up something about Trump, and she said she’d voted for him. Then she said she isn’t really a Republican, she just hated Hillary. But she also said her favorite president was Reagan.”

I didn’t want to tell him that he’d just spoken to the typical white woman of my age and home state. And to be honest, I was kind of bemused he’d met so few Trump fans that he found it noteworthy. Maybe it’s good to get out of our liberal bubble from time to time. After all, aren’t the pundits always saying that our real problem is political polarization, division, an inability to reach across the aisle? My son had met a person who voted for the person our family didn’t vote for, and she was friendly to him, and so wasn’t this a good thing? I mean, David Brooks and all those No Labels people would approve, right?

When she whispered to me what a great young man I was raising and offered her kudos to me for being his mother, I wanted to ask her what she thought of Trump’s consistent and clear disdain for black people.

But that’s not how it felt. The more my son told me about his seatmate, the more I wish I had said something to her. While we waited for our luggage at baggage claim, she came over and whispered to me what a great young man I was raising and offered her kudos to me for being his mother. I wanted to ask her what she thought of Trump’s consistent and clear disdain for black people. I wanted to tell her about the damage being done to my son’s friends who have gay parents. I wanted to yell at her that a vote for Trump was a vote against finallytaking climate change seriously, even now that it’s likely too late. If you like my son, I wanted to say, you should vote for people who will try to make the world better, not worse ― because he, and his generation, will live in it a lot longer than you or I.

“I can’t get that Trump woman out of my head,” my son told me later. “She was so nice in other ways. But she acted like politics is a game, not something that affects real life.”

There’s no more reliable marker of privilege than believing, or pretending to believe, that politics has no impact on real life. As a black male, my son is growing up to face dangers that his seatmate’s choice of president has increased. He will inherit a world shaped by a man whose core values are rotten. Trump may be incompetent, but he’s been able to do a lot of damage already.

My son said he thought the seatmate was a little embarrassed by her Trump vote. She told him she didn’t want to be judged for it, any more than she wanted to be judged for being from Kansas. And I agree ― nobody should be judged for where they come from. But if there were ever a fair basis on which to judge someone, it’s on the actions they take in situations that affect other people. There’s no more obvious example than voting.

So yes, I do judge her. And I hope she felt something ― maybe a little doubt about her own choices, values, and politics. If she liked my son so much, maybe she’ll carry his face and voice in her head a little bit, perhaps when she goes into the voting booth. I’m probably kidding myself that it had any effect on her. But she had an effect on us. My son did the math and realized he’ll be eligible to vote in 2024**. If he could register right this second, he would.** And I catch myself looking across the aisle at his seatmate and thinking, things are going to change. They have to.

Maybe the woman should stop lying to her son.

Trump is a horrible person on a multitude of levels but he’s no racist and nothing he’s doing in any way denigrates blacks or anyone else on the basis of race nor does it encourage same.

Divisiveness is exactly what democrats want because it’s the only way they can win elections. A strong, powerful US with a booming economy and everyone pulling together would assure democrats minority status in gov’t for decades.

A black homeless woman says Trump has allowed her to live rent free in Trump Tower for 8 years!

@LouMan
Is that your story? Or are you quoting some mother’s story? I could not tell from the way you posted it.

I always laugh when I hear the left and others call Trump a racist, bull shit

the man is a lot of things, a dirtbag, womanizer, cheater and all around narcissist but a racist? no
the man is friends with Don King of all people.

Many black leaders have publicly said the man is not a racist and some of the people have known him decades, only when he became a republican and ran for President the accusation came.

yeah, they call Trump a racist but they are okay with the late Robert Byrd and actual ex Klansman for 10 years.

It’s from the link that is posted.

Her story is longer so I took the relevant part.

The left like this woman will do anything to demonize trump. The issue I see is the brainwashing of a child to hate Trump and then she demonizes the person who voted for trump.

This is an op ed that addresses the issues created by the liberal mom.

I wonder what the boy’s mother thought when right after Bill diBlasio’s infamous ‘warning my Black son about cops’ speech two NYPD officers were ambushed by someone whose race hatred was clearly at the tipping point and diBlasio was happy to give it a shove. I wonder if the woman excoriated the cops who turned away from diBlasio.

lol bc its hufPo

Lowest black unemployment rate since wholly mammoths or some such…

This story illustrates what happens when we don’t call out leftist liars. The woman hears negative things about Trump from her favorite news and commentary sources and believes they are true. No wonder people hate Trump.

This story illustrates how parents brainwash their children.

This story also illustrates why we have the political divide in this country. The mom clearly a hater and labels people without a clue as to who they are.

“The only thing that matters ever…is our connection to family…that feeling of warmth, safety and belonging that all human beings crave,” juxtaposed immediately with, “BUT TRUMP!” The hypocrisy here is overwhelming.

In fact, by reducing the woman on the plane to her vote, she is dehumanizing her, which is exactly what soldiers in war are trained to do to the enemy, to make it easier when they have to kill them

Maybe, if she really believes that “the only thing that matters ever” is family and the feeling of “belonging that all human beings crave,” she could take a little more time to reflect on how the woman would have felt if she had said some of the things she wanted to say.

Personally, I rather doubt events played out as they did or if they even did at all. I find it hard to believe a 12 year old could or would want to engage in a political conversation with someone in their 50’s for an extended period of time.

I also wonder what kind of parent puts on noise cancelling head phones without doing a temperature check on their child’s conversation.

My son said he thought the seatmate was a little embarrassed by her Trump vote.

I suspect it was a made up story that exposes the mommy beliefs and hatred of the current president.

When your life is so comfortable because of an endless supply of EBT, free housing, Obama-phones, and subsidized healthcare that you have to literally invent reasons to feel oppressed. 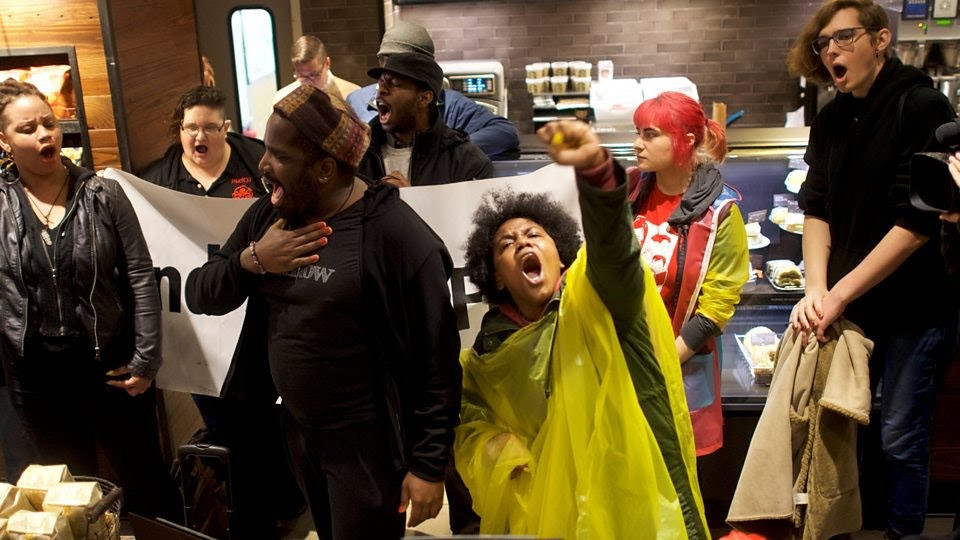 Trump is a horrible person

What makes him a horrible person ? The president will punch back when attacked and he has been attacked at ALL fronts . Trump doesn’t “act” presidential because he is NOT a true politician and the vast majority of those in Washington hate him for that reason and attack at will .

Wow, what a bunch of nonsense. You know what needs to change? The accusations of racism without proof. There is nothing that Trump does that shows he’s a racist. I guess if you repeat it enough, people begin to believe it.

What was hilarious was my daughters best friend recently moved in with us. She’s a young lady, 18 years old and mixed race, 50% black, 50% mutt. (Her words, not mine) Recently we went to vote and I honestly didn’t know what her politics were… She asked to go with us and I said “You voting for Beto?” She replied… “I’m black, not retarded.”… Stands to reason, she’s in college, working full time and is a respectful young lady. I’ve got all the time in the world for a kid like that.

I guess if you repeat it enough, people begin to believe it.

No pun intended, but that is the truth. MSM and leftists are great at using it to their advantage.

I guess if you repeat it enough, people begin to believe it.

That is a truism. It has been a tenet of political deception for generations. Even lying about historical facts can be effective for the deceivers if the populace is kept ignorant.

Epitomic of this is that socialism will make a country a better place for all citizens thereof.