UK/US now shitholes but why?

This thread has been taken in another direction(aka derailment) No problem - we will now include US and discuss the reasons/people behind this phenomena.

So if we oppose this we are racists?
Write your MP with your thoughts What? You are now coming to terms with this sobering fact?

It’s a waste of time, they won’t comment on ongoing investigations and other such bullshit excuses. The time for sensible has gone. All the establishment have done to date is censor and hound “Sensible”. They just don’t care. The truth is in an open forum I can’t even suggest what I think the solution should be.

Why aren’t you guys rioting yet?

“Asian” in the UK probably doesn’t mean the same group as in the US.
“White” in the video means British.

They can’t get away from karma, even if they are Muslims.

Germany isn’t doing any better.
Destruction of Europe is not happening by chance.
It was planned.

“I have only one urgent appeal: It is your task to protect the citizens in the best possible way. For God’s sake, you should finally start doing that.” – Martin Hess Martin Hess is a former chief superintendent in the German police and a member of...

Don’t worry. Things are slowly starting to turn the corner. 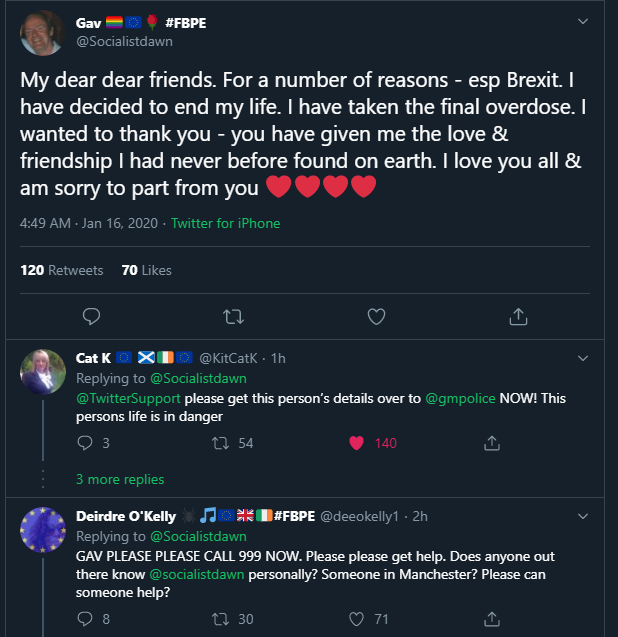 It’s a bit more complex I believe. An incohesive, unarmed rabble will likely be obliterated in short order.
We have serious issue with people who just can’t afford to raise their head above the parapet due to being shackled to debt, not just mortgage debt, all kinds of debt for shite they don’t need. This is how TPTB control the masses. Fear.
Of course if we could become cohesive and hit them financially by en masse saying F.U. to the debt, then this would give them a whole world of shit to think about.
And perhaps people who are going to commit suicide should consider a way to take a few big wigs out with them too.

Cultures worldwide are destroying themselves by adhering to globally accepted political correctness.

Our biggest enemies are our elected officials and the appointed and hired government officials that determine the regulations and laws we must obey as they result from interpretations of the legislation.

The fatal fallacy of accepting a 14th century THEOCRACY as a current day RELIGION is mind boggling to sane people.

Islam is to blame for ALL of this carnage being visited upon or children.

Muhammad, the exalted leader of today’s mob of goatfuckers, was a demented pedophile. Why should we expect anything more civilized from his followers?

We are slitting our own throats in our refusal to deny Islam further intrusion into our once thriving societies.

It’s a bit more complex I believe. An incohesive, unarmed rabble will likely be obliterated in short order.

The same reason people are not rooting in the US over the House and their kangaroo court.

Waiting to see what the senate does.

When it comes down to rampant and global paedophilia, ‘the church’ makes these scumbags seem like reluctant amateurs.

What a load of shit - I note that the sympathisers are females.

Cultures worldwide are destroying themselves by adhering to globally accepted political correctness.

Our biggest enemies are our elected officials and the appointed and hired government officials that determine the regulations and laws we must obey as they result from interpretations of the legislation.

The fatal fallacy of accepting a 14th century THEOCRACY as a current day RELIGION is mind boggling to sane people.

Islam is to blame for ALL of this carnage being visited upon or children.

Muhammad, the exalted leader of today’s mob of goatfuckers, was a demented pedophile. Why should we expect anything more civilized from his followers?

We are slitting our own throats in our refusal to deny Islam further intrusion into our once thriving societies.

I see it as being the entire western world that’s obsessed with loony-left PC. It has become a form of insanity, and we’re really going to pay the price of the naivete. Extreme liberals are the curse of humankind, and they will bring about our destruction.

I would agree had you left out “entire” from the description of the western world. If we conflate zealous liberalism with loony leftism (as many do), then the United States should be removed from the list. It seems to me that we (USA) vacillate between liberal and conservative periods of government depending upon how fed up the voting public gets with the most recent experimentation involving who holds the reins.

When the table turns, the incoming party often reverses course and undoes the “accomplishments” of the preceding controller. as did the Trump administration regarding the “progress” made by Obama in his “fundamental transformation”.

I doubt we will be continuously liberal until the loony leftists successfully neuter the Electoral College via amending the Constitution (not likely) or filling a significant number of red states with enough illegal votes to steal every election thereafter (a distinct possibility).

We are still among those countries allowing the systematic destruction of our culture by way of awarding freedom of religion to the theocracy of Islam. Chip, chip, chip…city by city, state by state…all too soon, it will be a caliphate.

Incidentally, a search for the most liberal countries in the world yields this (from October 2019):

It appears to bolster my opinion that Western Europe will be the first to succumb to Islam. Sweden is definitely leading the pack.

This is more of a symptom of the Post Modern condition than mere thought of a religious ideology as being the cause. Its more about intersectionality more than anything.

"The desire to “smash” the status quo, challenge widely held values and institutions and champion the marginalized is absolutely liberal in ethos. Opposing it is resolutely conservative. This is the historical reality, but we are at a unique point in history where the status quo is fairly consistently liberal, with a liberalism that upholds the values of freedom, equal rights and opportunities for everyone regardless of gender, race and sexuality. The result is confusion in which life-long liberals wishing to conserve this kind of liberal status quo find themselves considered conservative and those wishing to avoid conservatism at all costs find themselves defending irrationalism and illiberalism. Whilst the first postmodernists mostly challenged discourse with discourse, the activists motivated by their ideas are becoming more authoritarian and following those ideas to their logical conclusion. Freedom of speech is under threat because speech is now dangerous. So dangerous that people considering themselves liberal can now justify responding to it with violence. The need to argue a case persuasively using reasoned argument is now often replaced with references to identity and pure rage.

Above all, postmodernists attacked science and its goal of attaining objective knowledge about a reality which exists independently of human perceptions which they saw as merely another form of constructed ideology dominated by bourgeois, western assumptions. Decidedly left-wing, postmodernism had both a nihilistic and a revolutionary ethos which resonated with a post-war, post-empire zeitgeist in the West. As postmodernism continued to develop and diversify, its initially stronger nihilistic deconstructive phase became secondary (but still fundamental) to its revolutionary “identity politics” phase.

The Encyclopaedia Britannica says postmodernism “is largely a reaction against the philosophical assumptions and values of the modern period of Western (specifically European) history” whilst the Stanford Encyclopaedia of Philosophy denies this and says “Rather, its differences lie within modernity itself, and postmodernism is a continuation of modern thinking in another mode.” I’d suggest the difference lies in whether we see modernity in terms of what was produced or what was destroyed. If we see the essence of modernity as the development of science and reason as well as humanism and universal liberalism, postmodernists are opposed to it. If we see modernity as the tearing down of structures of power including feudalism, the Church, patriarchy, and Empire, postmodernists are attempting to continue it, but their targets are now science, reason, humanism and liberalism. Consequently, the roots of postmodernism are inherently political and revolutionary, albeit in a destructive or, as they would term it, de con structive way."

The pattern is pretty clear to some while to others they are perfectly content on hypothesizing along other narratives of conspiracy and blaming a particular class of people for all of societies ills. It is after all much easier to do when living in the sublime of Post Modernism. The truth is only based on one’s self values that determines what the truth is and history is a mere exhaust fume seen only in the rear view mirror that has become out of fashion to recognize or learn from. Welcome to the age of Nihilism, and the dystopian landscape that Post Modernism brought us to this point in human history to consume once again!

Yes, according to the diagrammatic the Nordics are way out in front (suckers!), and maybe some of that orange shading ought to be showing up in Canada too? There are obviously nuances in US politics which as a Brit I don’t discern, but I have to say there seems to be more fluency there than here, and a readiness for the vox pop to ebb and flow according the Left-Right political camps: and if this site is an indicator, there’s more awareness of the threat of fundamentalist Islam there than there is here in the UK, but by some measure we’re still predominantly well left of centre. The trouble is though, that the politicians know it’s where the votes are, and propitiate the loonies - especially the Conservatives - lest they get re-branded with the epithet of The Nasty Party, which they had back in the late 60s.

There was a time when Brits would have died to the last man protecting the UK. How the mighty have fallen. America is in a similar boat, but at least Americans can still arm themselves.

I disagree, small armed groups have proven to be very effective, of course they still can’t be a rabble.

Take heed of our situation and while you are still armed force them out of your country.
I have been told you already have quite a few muslim controlled no go areas, it doesn’t take long for the rot to set in