Well they’ve been announced, abuse of power and obstructing congress. The only question is, will they actually hold a whole house vote, and will congress actually attach the asterisk to his name? 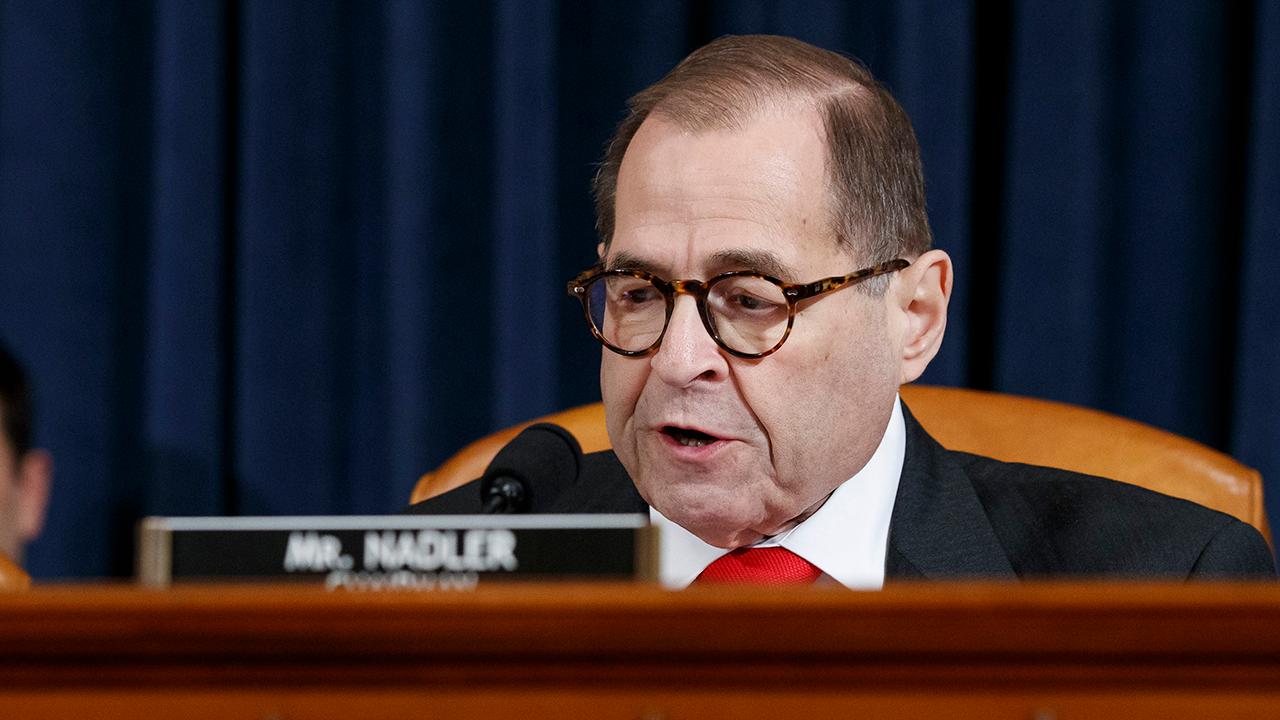 House Democrats on Tuesday introduced two articles of impeachment against President Trump alleging abuse of power and obstruction of Congress regarding his interactions with Ukraine, touching off a rapid-fire sequence that could result in a...

“The President, Vice President and all civil Officers of the United States, shall be removed from Office on Impeachment for, and Conviction of, Treason, Bribery, or other high Crimes and Misdemeanors .”

At least the Democrats admitted that none of these accusations rise to the level of impeachment.

Yep, and if he wasn’t president, he’d be indicted and tried for abusing his power, and obstructing congress from their constitutional duties. And you can be impeached for misdemeanors…

Btw, this clown thinks that article two gives him the right “to do whatever he wants”. As he has demonstrated over again, he is illiterate about constitutional law.

Does anyone know what Adam Schiff has to say about his daughter dating the fake whistleblower Eric CIAramella? Seems to be relevant to the case for impeachment. 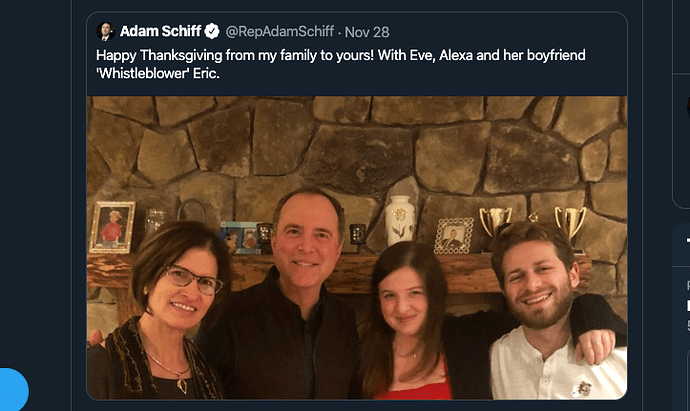 In a Tweet, Rep. Adam Schiff wished everyone a happy Thanksgiving from him, his wife, his daughter Alexa, and her boyfriend 'whistleblower' Eric. Many were confused by the Tweet. Was it a joke, or an inadvertent public disclosure. Schiff has...

Considering the amount of dual Israeli-US citizens running this impeachment sham, word on the street is they kicked off the ceremony today with this: The Dems got power hungry and thought they could not be taken down. Pure arrogance.

They are being taken down. They are walking back and looking like weakened fools. More take down is yet to come.

The message is clear for BOTH sides of the aisle: No matter how powerful you think you are? You aren’t.

If there is any abuse of power,it’s by the Pelosi lead House.They’re upset because Trump has thumbed his nose at them and these baseless charges. The Dems abuse of powet is using taxpayers money to pursue this farce instead of passing any meaningful legislation.
No where in his conversation with Zelensky, did he ask for a favor based on the witholding of money. All he asked for was an investigation into Hunter Biden seat in Burisma and his father asking them to fire the special prosecutor.
Joe Biden did this as a sitting vp of the U.S. and this isn’t impeachable!!!
When this goes to the Senate,it has a smowballs chance in hell of succeeding

The Dems abuse of powet is using taxpayers money to pursue this farce instead of passing any meaningful legislation.

If you haven’t seen this yet, Matt Gaetz nails these points: He could be a future presidential candidate. What a sharp mind?? He had Goldman flustered and was PO ed at his evasiveness.
Great video!!!

If that article is accurate, this would have enormous bearing on the case and Schitweed’s intent. if true, it is more than enough to justify a Senate acquittal.

I would caution however, that a good photoshop can make anything look real.

He could be a future presidential candidate. What a sharp mind?? He had Goldman flustered and was PO ed at his evasiveness.
Great video!!!

Time will tell. However, he has been absolutely on fire in these hearings and … he was not afraid to call the Pensacola Navel Base attack an act of terrorism while others were hesitant.

If there is any abuse of power,it’s by the Pelosi lead House.They’re upset because Trump has thumbed his nose at them and these baseless charges. The Dems abuse of powet is using taxpayers money to pursue this farce instead of passing any meaningful legislation

Too much FOX news huh? Something like 400 pieces of legislation has been passed by the house, over 250 of which are bipartisan bills. And they set on Mitch McConnells desk collecting dust. So direct your ire properly.

Beauty is in the eye of the beholder. From where I sat, Goldman routed Gaetz.

Given that the Dems are solidly (except for 31 very nervous D’s) on Shiff’s side, and the GOP is solidly on Turley’s side, the conclusion is forgone - acquittal after a brief trial in the senate where the question will be “where is the proof?” as well as “where is the whistleblower?” and "what value did your son provide Burisma? to Joe Malarkey.

The Dems. have played by some very skewed rules- now it’s the GOP’s turn.
Paid disruptors from the Dems. will infiltrate the gallery, and make the Dems. look like weasels, just like with the Kavanaugh hearing- except McConnel/Roberts can have that gallery cleared out.

Acquittal is again, forgone - no direct evidence, just assumptions. Then all the liberal heads will explode with shouts of ‘lawless Republicans!’ for a few days, Colbert will have a well rehearsed tear, the MSLSD crew will abandon reality itself, etc.

Progs will see the DNC as impotent, independents will see them as vindictive, and Republicans will show up at the polls in record numbers. The Dems should rue the day they started this, but they are incapable of learning from any experience that conflicts with their world view.

Ah, the satisfying sound of another conservative o the SCOTUS, and thousands of conservative judges in the appeals court, sweet music indeed.

Absolute direct evidence was presented but the GOP won’t accept it.

Btw, this clown thinks that article two gives him the right “to do whatever he wants”. As he has demonstrated over again, he is illiterate about constitutional law.

BTW that is a blatant liberal LIE and that Trump comment about his article 2 rights to do whatever he wants as head of the Executive branch of Government regarding the firing of Comey and the fact that he could also fire Mueller was taken completely out of context by the seditious piece of dung lying MSM and Democrats.

There are three equal branches of Government, the Legislative, the Judiciary and the Executive and brace yourself now he is the boss of Executive branch and damned straight the Constitution gives him the right to do what he wants and to fire whoever he wants.

Stick that in your uninformed and illiterate ear!

I actually had fun watching this hearing because the R’s were fired up and giving the piece of garbage Dems hell and I loved it.

Stick that in your uninformed and illiterate ear!

Why don’t you learn civility in debate rather than engaging in personal insults like the chief red hatter himself. It’s never any wonder why you guys adore him, you all are boorish, name calling and insulting as a matter of course.

When this goes to the Senate,it has a smowballs chance in hell of succeeding

That’s been a given since the very beginning. He’ll still have the asterisk next to his name along with his buddy Bill…