Except for one little thing, Biden will not be in the next election.

Morons like you are being played by the MSM and left just like the 2022 election where the GOP was trashed. They want Trump on the ticket as he’s a sure winner for any democrat running.

It’s a little to early to be drinking ain’t it??

How can we ever forget ! The master RINOmaker EVER !!!
Lets not forget he told Georgia to stay home …

Conservative pundit Ann Coulter is predicting the end of Donald Trump’s hegemony in the GOP, saying the former president “is done.”

“Trump is done,” Coulter, a onetime Trump booster turned critic, wrote in an email to The New York Times. “You guys should stop obsessing over him.”

Coulter’s comments came in an article published in the Times on Sunday about the mounting tensions between Trump and Florida Gov. Ron DeSantis (R) amid speculation of a potential showdown for the 2024 Republican presidential nomination.

While DeSantis has so far sought to tamp down rumors that he’s angling for a possible White House bid, his rise within the GOP and growing national profile have irked Trump, who sees the Florida governor as owing his political success to him.

Trump has privately griped about DeSantis’s refusal to publicly commit to foregoing a 2024 run if the former president chooses to mount another bid for the White House.

But Trump has also begun to sharpen his stance on DeSantis publicly. In an interview with a South Florida radio host last month, Trump appeared to issue a challenge to the Florida governor, saying that he would beat DeSantis in a 2024 primary if he decided to run.

Trump also appeared to take a swipe at DeSantis during a recent interview with the conservative One America News Network in which he slammed politicians who won’t say whether they received a COVID-19 booster shot as “gutless.” DeSantis has repeatedly dodged questions about his booster status.

Coulter pounced on Trump over those comments in a tweet last week calling the former president a “liar and con man.”

“EXCLUSIVE: Trump is demanding to know Ron DeSantis’s booster status, and I can now reveal it,” Coulter wrote. “He was a loyal booster when Trump ran in 2016, but then he learned our president was a liar and con man whose grift was permanent. I hope that clears things up.”

Everywhere you looked this week there were stories that were the debris thrown into the air when Trump re-entered the atmosphere and, like all other space junk, turned into a bright orange fireball heading for oblivion. Diaper Donnie still controls the crazy nut job base jissbag 617 so he can still win the nomination. But he’ll get destroyed in the general by even more votes next time if he gets that far). Trump has more skeletons in his closet than Arlington National Cemetery. Any GQP candidate that wants to lower themselves into Trump’s gutter could eviscerate him, and make his life very difficult.

Anna’ is using psychology to screw with people like you ? She loves trump

Coulter went on: “He held a rally and he encouraged them to march on the Capitol while he goes back to the White House to have a nice lunch because he’s a gigantic pussy. He always has other people doing his dirty work. He was this tough guy on The Apprentice. He couldn’t even fire his own attorney general. He sent Corey Lewandowski to do it. He just trash-tweets Jeff Sessions on Twitter. Oooohh what a big man!”

Coulter sputtered with rage as she vented about the soon-to-be ex president. “I hate him,” she seethed.

Right-wing pundit Ann Coulter has dismissed former President Donald Trump as a viable Republican leader, describing him as a “jacka** RINO” and insisting that “he’s so done.”

In a tweet posted Friday, Coulter wrote that Trump needs to “shut up,” while also highlighting his failure to succeed despite presiding over a majority GOP Congress for two years, and the fact that he gave important government positions to unqualified loyalists.

Perhaps you should refrain from talking out of your AZZ.

You don’t understand she’s screwing with people like you

Donald Trump has declared himself a winner … again.

Trump announced on his social media platform on Tuesday that he won the Senior Club Championship at Trump International Golf Club in unincorporated West Palm Beach last weekend, despite not playing the first round of the tournament.

Members arrived the second day surprised to see Trump with a five-point lead, according to the Daily Mail. But Trump never played the first round as he was attending a funeral in North Carolina of ardent supporter Lynette Hardaway, known by the moniker “Diamond” of the conservative political commentary duo Diamond and Silk.

Trump told tournament organizers he played a strong round on the course Thursday, two days before the tournament started, and decided that would count as his Saturday score for the club championship. That score was five points better than any competitor posted during Saturday’s first round.

Was, past tens. You and your ilk will be responsible for another democrat n the WH.

Perhaps you should refrain from talking out of your AZZ.

So let’s see just how long Trump was a DEMORAT ???

Perhaps that’s why he is so great at making RINOS .

he hung with the likes of Hillary Clinton and Harvey Weinstein. He was Hollywood. He was a Playboy. He was unfaithful to his wife, and thereby his family. In many ways, the guy was a scoundrel.

It’s been a rough month for former President Trump.

Since his Nov. 15 announcement that he plans to make a third run for the presidency, his legal problems have increased; his handpicked candidate, Herschel Walker, lost the Senate runoff in Georgia; he’s endured widespread criticism over his public association with racists and antisemites; and a growing number of Republican figures have started to say publicly what they used to whisper in private:

Trump is a liability for their party. Just after the midterms, I wrote that the results probably would undermine the former president within the GOP. Now, a raft of new polls show that has happened: Trump’s once-solid support among Republicans has cracked, and his approval within his adopted party has fallen to levels not seen since he first won its nomination in 2016.
The most recent Wall St. Journal poll found Trump trailing Florida Gov. Ron DeSantis 52%-38% in a hypothetical primary matchup. Perhaps worse for Trump, only 71% of Republicans had a favorable view of him. That’s down from 85% in March and the 90% or higher that polls typically found through most of Trump’s presidency.

Sorry, I’m ot a RINO when will you remember that??? Independent as I think for myself and choos what’s best for the country not a party.

When will you learn that democrats nor republicans elect the president. It take the independents to elect a president…

How many of you did your home work with the data I sent to your inbox? Ron has zero chance of beating trump, now let’s move on and talk strategy. 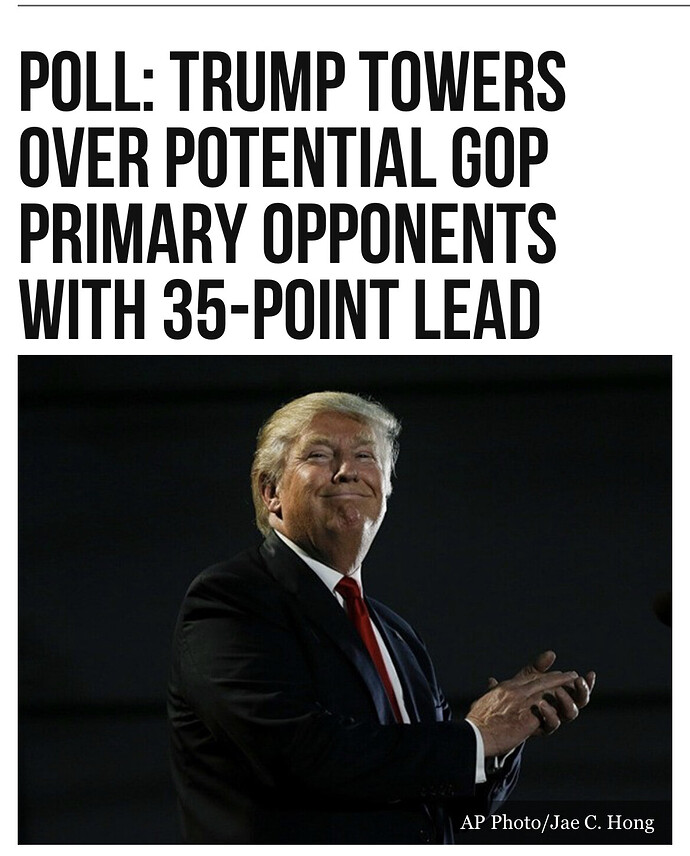