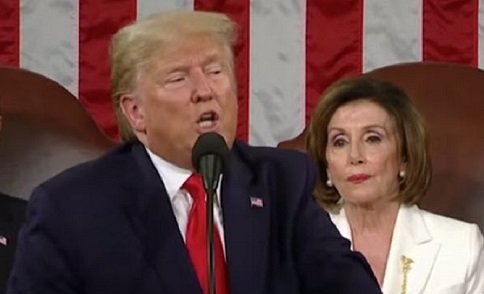 The White House $4.8 trillion budget proposal for '21 cuts foreign aid and some social safety net funds, and increases funding for NASA, the VA, and DHS.

Longer range, the plan is a start toward eliminating the federal deficit by 2035, according to Fox News. The deficit this year is expected by the Congressional Budget Office to exceed $1 trillion this year. The White House plan is to cut $4.4 trillion in federal spending over the next 10 years.

While I’d like to see more cuts especially to the Department of Education, I will take cutting foreign aid down to the bone any day of the week and twice on Sundays.

They aren’t cutting they are just moving money around. Honestly, I am quite disappointed with this. The military needs to be cut down in spending and most social programs need to die, but now…despite the talk of cuts…we are actually getting more debt? My kids will be drowning in debt because no administration wants to have less money to work with, how much more can we borrow before the dollar collapses?

And if the government goes bankrupt and dissolves, GREAT. You have no reason to care unless you’re a government employee or dependent - and screw you losers anyway.

Conservatives only gave a shit about about deficits when the government was worth saving. Today it can go screw itself.

Conservatives only gave a shit about about deficits when the government was worth saving. Today it can go screw itself.

The problem is Obama spent his entire presidency gutting the US military. Remember the word “sequestration” - that’s what that was all about. Had he not done that for nearly a decade, Trump wouldn’t have been put in the position to have to drastically increase military spending. You can’t cut military spending forever. At some point you have to upgrade and maintain the stuff you already bought.

Now, as far as all of the useless and wasteful social programs that have no checks and balances? Yeah… eliminate all of those and eliminate all foreign aid. we shouldn’t be in the business of building our competitors up with our tax dollars. We are the most powerful country on Earth and it’s time to start acting like it again.

I agree except with the canceling of all foreign aid. We need to help those peoples who have been subject to devastating natural disasters such as drought, tsunamis, hurricanes, famine, genocide, and such.

I’m not a bleeding heart liberal, but I do believe in helping the oppressed and downtrodden souls that have no means of helping themselves.

I’d be good with that only after every single homeless veteran has been accounted for and is getting the services that they need and deserve. Until that happens, not a single penny should go abroad. Same goes for all US victims of natural disasters. There are plenty of people in this country who are getting screwed over by insurance companies who won’t pay out on damages because it would cost them too much money. We have our own problems to deal with. Let’s get our own house in order first.

Mexico’s entire foreign aid package should get spent on the wall.

I agree with the ironclad condition that a trained manager accompany the grant and the grant be audited every 6 months. Currently it ends up in the pockets of crooked local pols and various democrats.

Even our material aid (in the form of bottled water, food, diapers, blankets, tarpaulins, etc) is not distributed to those in need of it.

Recent discoveries were made of literally thousands of tons of material aid being stored in huge warehouses in Puerto Rico. It hasn’t reached the people yet. The government officials there who are responsible for the delay should be shot dead!

It’s not a BALANCED budget that he’s proposing.

As a candidate he promised to balance the budget and pay off the national debt.

It’s not a BALANCED budget that he’s proposing.

As a candidate he promised to balance the budget and pay off the national debt.

The plan balances the budget by 2035.

Didn’t AOC say we were all dead by climate in 2031 anyway?

Including the billions given to the very rich country of Israel???

Mexico’s entire foreign aid package should get spent on the wall.

But this budget says we are supposed to get 1000 miles of more wall. Which probably means we’ll get another 2.5 miles of wall in exchange for full amnesty.

That’s the result of paying taxes to the corrupt establishment and voting for the main parties in America.

Weren’t we supposed to have the wall by now? Oh yeah, that’s right; the GOP resisted, Dems trashed and slandered, and a gang of rootless globalist cosmopolitans hijacked the Administration.