Those who repeat the mantra of "Conspiracy theory!" are the real enemy! Folks, wake up. The enemy comes in many guises. They even pretend to be Trump supporters.

According to you they are only the enemy if no one conforms to your point of view! Hence why you are the biggest asshole here!

I’m giving you a like for proving me right.

The definition of Narcissism is someone who thinks they are always right, when everybody else thinks you are the biggest cyber parasite here!

Thought you would waste your time today???

Meh! I am at the office waiting for renders to be completed. This fucking dickweed derails every-thread here so why show him the same courtesy?

Thought you were punishing yourself while you’re getting a root canal.

California and Australia share a common enemy: overzealous environmental regulation. In both places, the unintended consequences of a radical environmentalist agenda has been massive wildfires.

Medicare for All’? The Country Can Barely Afford Funding Medicare Now

There is no practical way to make Medicare in its current form financially viable, let alone a foolhardy scheme like Medicare for All.

Remember Butch Cassidy and the Sundance Kid? We’re not talking Paul Newman and Robert Redford in stirrups, we’re talking the real thing. In the remote Big Horn Mountains of Northern Wyoming the real life outlaws that inspired books and movies once rustled cattle and raised hell.

Roughly between the 1860s and 1910, this area was a notorious stop on the outlaw trail during the romanticized lawlessness of the American West. One of the most famous hideouts of such outlaws as Butch Cassidy’s Wild Bunch, the Logan brothers, and Jesse James was a remote spot in Johnson County Wyoming called the Hole-in-the-Wall.

I know! My brother has a house in the Big Horns, spent many summer camping nights up there. Just before Sheridan along route 14.

Pretty neat place. Best of all few liberals visit the state with the exception of the morons from Colorado.

3 weeds ago went to Casper to see this site:

Harsh looking geological landscapes are the planet’s character actors, and they are basically stuck with two roles: stand in for Hell, and more recently, an alien planet. Hell’s Half Acre has the honor of getting to play both.

Despite being a vast 300-acre canyon, this spiky, wrinkled landscape acquired its name when a lost cowhand stumbled onto it and mistakenly thought he had arrived in an area to the southwest also known as Hell’s Half Acre. (That area is made up of alkali bogs and is very different looking, indeed. The cowhand was obviously very confused.)

The name stuck; however, the cowhand wasn’t the first to ascribe devilish qualities to the area, which has previously been called “The Devil’s Kitchen”,”The Pits of Hades” and most charitably “The Baby Grand Canyon.”

Yes it is! Love that place, and hope to return there some day! I love the summer night skies there. I used to hang out in Cody, and there is a drive there called GreyBull, where a graveyard of old FireFighter planes collect. Very cool place!

This black and White I took of My younger cousin many many years ago. 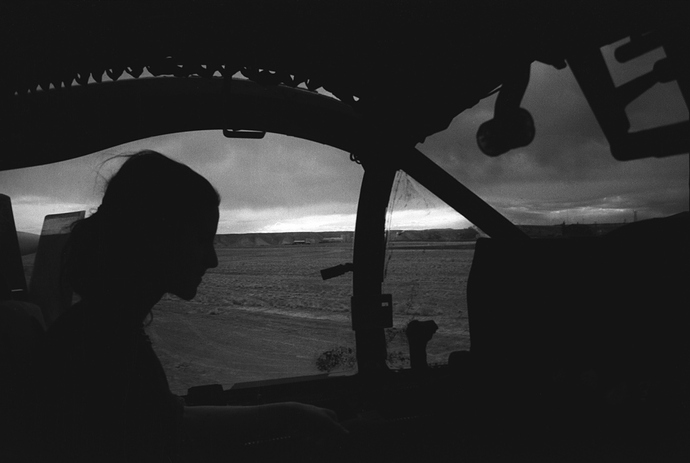 Have you spent any time at Fiery Gorge or Green River?

—Newsom, Cuomo and other criminals

Ha ha hah! Derailing your own thread! Thanks! Just goes to show how you are so willing to show everyone here how retarded you are, which is most of the time!

Who cares. You are not American, you don’t live in America, you don’t pay taxes and our issues are of no concern to you.