This Is What Pisses Me Off About Trump

Granted, this video was spontaneous but Trump was sitting with his biggest opponents in funding the wall and was totally unprepared to take on Pelosi. He could have embarrassed her… he could have shut them up but instead…

All Trump would have had to do is turn the discussion around… ‘Why is it Nancy that you claim to want border security but refuse to fund the wall. You have stonewalled funding in the past but unbeknownest to people we have built some that has proven to be 100% effective. I just have to ask Nancy and Chuck… what is your game. You claim to what border security yet you refuse to fund a wall that works and continue to throw money at a barrier that we see every day on TV where people are digging under or climbing over. Why do you like wasting taxpayer money on things that don’t work and still claim you are for securing the southern border of our sovereign nation. You really owe people an explanation’… CUT !

Instead she drew him into a conversation where he was on the back foot… could he really get the vote in the house?..

If he is as passionate about the wall, he should damn well be able to hold his own in a debate about it.

Hell, we got more help from Google CEO Pichai over Russian interference when questioned by Rep. Jerry Nadler.

There’s no wall. There will never be a wall. They just repaired a fence. Also, was the “wall” 90% effective, or are drugs pouring into the country.

Well there certainly is a concerted effort to insure that it never becomes… because their are a rather large group of Americans who don’t care about our border, our nation or our security

What are you talking about? Trump held a meeting about border security and the impending gov’t shutdown in the oval office with Pelosi and Schumer with full live camera coverage. Trump baited the fuck out of them both and they made bumbling fools of themselves while Pence quietly contemplated if he should murder them so he can finally smite gays from heaven with his hetero pal Jesus. Every red blooded American saw it exactly the same way. 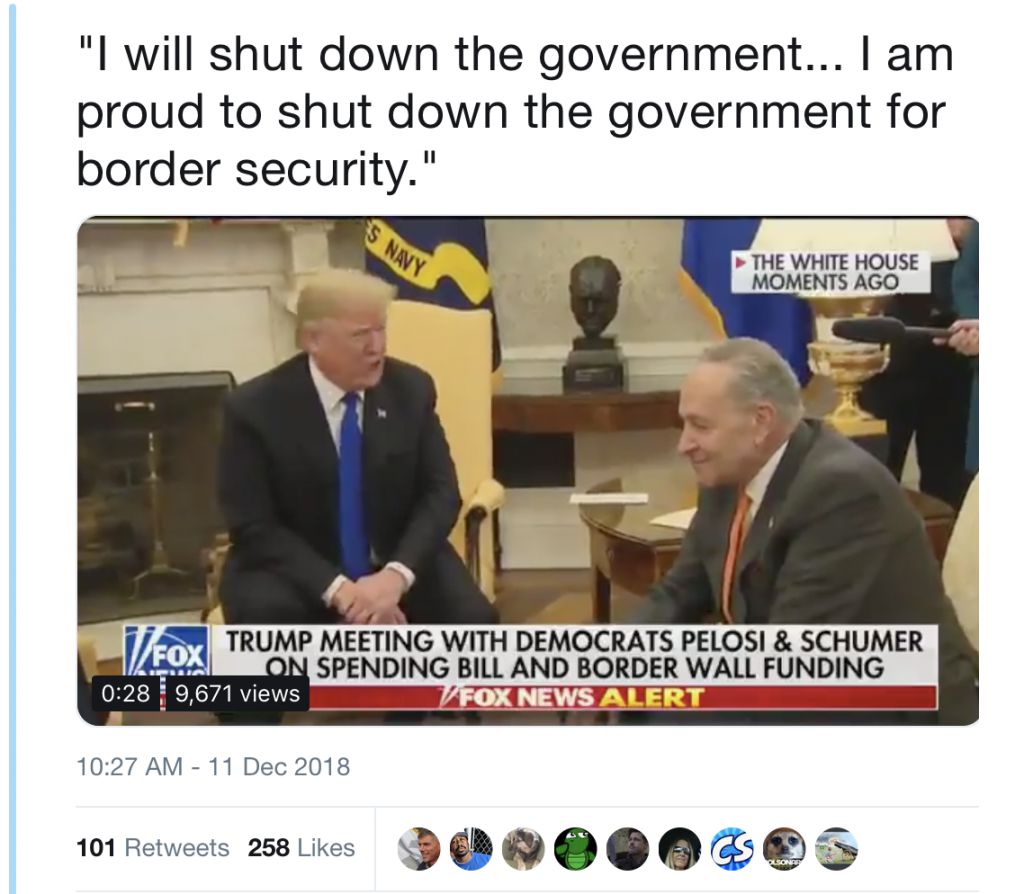 ■■■■ generally don’t have the chutzpah for real life performance arts, they are sniving conniving rats who only love to operate from the shadows with scripted lines to the media. Trump needs to keep doing this to Schumer, I love it. 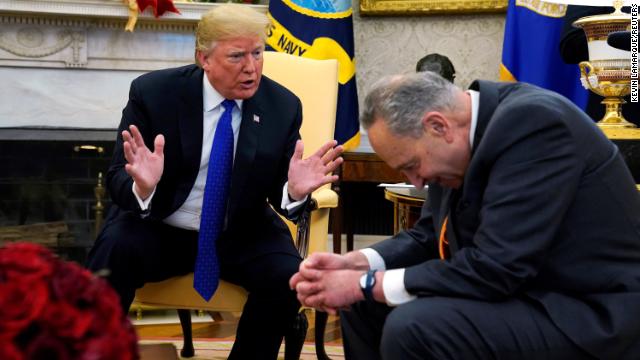 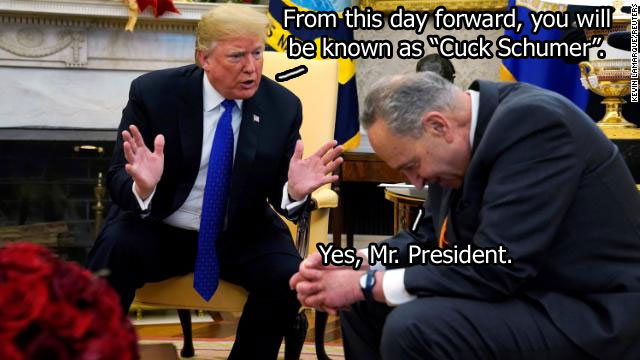 Amazing how Chuckie doesn’t look trump in the eye.

Amazing how Chuckie says let’s do a CR.

We came in here in good faith. Give us what we want.

Notice how he intently stares at the floor.

So tell me… if the legislation went before the house… would it pass?.. It was a simple statement made by Pelosi many times and all Trump could say is ‘If I wanted it passed, It would pass’… we already saw just how much pull he had on Obamacare. He wasn’t prepared when he opened up the floor to Pelosi… He just wasn’t.

Schumer’s not the problem… Pelosi owned Trump. If Trump can’t get it passed right now today in the House, the Senate don’t matter and after Jan 21 he won’t get it passed in the House and the Senate will still not be the problem. Pelosi told Trump to put up or shut up. Trump has the house and the senate for about another month… we will see just how far Trump gets without a shutdown and even that is unlikely to go nearly as well for him as the last one.

The best way for Trump to proceed is for him to use the military to build the wall and shove it up there behind.

There is a clause that h can use called national security.

The next 2 years are going to be hell.

Does anyone actually have a link to the full video? I’m only finding the highlights which obviously don’t put Trump in a positive light.

The last link I put up overlaps the first one. The last one tells the press that the meeting is over.

I think I got the full length video: I watched that whole episode on C-SPAN 3 just after the live coverage of the Google hearing ended. The Trump/Pelosi/Schumer tribunal with Pence sitting silently nearby wasn’t shown live because it had been recorded before they went into their private meeting.

The C-SPAN presentation actually started a few minutes before Trump asked Pelosi if she had comments. It opened with video only and started when Trump gave the signal…the sound was turned on and Trump started to speak. The first video in the OP doesn’t catch all of what Trump said before asking Pelosi to speak (it skips about the first 5 minutes), but it does show more than yours does.

Asking Pelosi to speak, in my opinion, was his first mistake. He shouldn’t have allowed either Pelosi or Schumer to speak at all in that setting.

They each repeated their talking points outside of the White House after the entire meeting was over.

Likely all of the repeat broadcasts on the news tonight will be edited to show only the portions that make Trump look bad and the liberal goons to look good.

Here is the whole story.
https://www.c-span.org/video/?455813-1/president-trump-democratic-leaders-clash-border-funding

■■■■ generally don’t have the chutzpah for real life performance arts, they are sniving conniving rats who only love to operate from the shadows with scripted lines to the media. Trump needs to keep doing this to Schumer, I love it.

Generalizing about ■■■■ is a good way to forfeit any legitimate argument you may have.

Notice how he intently stares at the floor.

What was he grinnIng about? He looked like a silly fool.