The Truth About The 2nd Amendment

It is a little difficult at times to fit a subject into the categories presented here, but here goes: I am talking here about the incredibly misunderstood 2nd Amendment to the United States Constitution. Let me repeat it: “A well regulated Militia, being necessary to the security of a free State, the right of the people to keep and bear Arms, shall not be infringed.” Notice that nothing here is said about keeping arms to go hunting. Nothing here is said about keeping arms for self-defense. It is talking about keeping arms to protect the SECURITY OF A FREE STATE. Get it, we need to protect what we once had: a free state, which we no longer have. And believe me when I say that those who have taken our free state from us do not want the American people to have guns! All evil governments want to disarm the people, for they are afraid of the people. And the well regulated Militia spoken of here is not controlled by the government, it is not the National Guard, which use to be called the Home Guard until the government took it over. Sence the 2nd Amendment speaks of the people, it is the people who should make up the malitia and be well regulated by the people, not the government. But you will notice that the NRA says nothing about forming “Militias,” why not? lf the NRA is suppose to be defending the 2nd Amendment why arnt they out there forming malitias? I believe the NRA has beome a fake outfit, and has no desire to defend the 2nd Amendment as it is written. To them, the NRA, it’s all about hunting and self defense, not about securing a free state. So how do we keep guns out of the hands of people who have gone berserk? Probably can’t, they materialize from the evil in which the American people have embraced, which is material for another story.

Want original intent to go with that?

Extravagant as the supposition is, let it however be made. Let a regular army, fully equal to the resources of the country, be formed; and let it be entirely at the devotion of the federal government; still it would not be going too far to say, that the State governments, with the people on their side, would be able to repel the danger. The highest number to which, according to the best computation, a standing army can be carried in any country, does not exceed one hundredth part of the whole number of souls; or one twenty-fifth part of the number able to bear arms. This proportion would not yield, in the United States, an army of more than twenty-five or thirty thousand men. To these would be opposed a militia amounting to near half a million of citizens with arms in their hands, officered by men chosen from among themselves, fighting for their common liberties, and united and conducted by governments possessing their affections and confidence. It may well be doubted, whether a militia thus circumstanced could ever be conquered by such a proportion of regular troops. Those who are best acquainted with the last successful resistance of this country against the British arms, will be most inclined to deny the possibility of it. Besides the advantage of being armed, which the Americans possess over the people of almost every other nation, the existence of subordinate governments, to which the people are attached, and by which the militia officers are appointed, forms a barrier against the enterprises of ambition, more insurmountable than any which a simple government of any form can admit of. Notwithstanding the military establishments in the several kingdoms of Europe, which are carried as far as the public resources will bear, the governments are afraid to trust the people with arms. And it is not certain, that with this aid alone they would not be able to shake off their yokes. But were the people to possess the additional advantages of local governments chosen by themselves, who could collect the national will and direct the national force, and of officers appointed out of the militia, by these governments, and attached both to them and to the militia, it may be affirmed with the greatest assurance, that the throne of every tyranny in Europe would be speedily overturned in spite of the legions which surround it. Let us not insult the free and gallant citizens of America with the suspicion, that they would be less able to defend the rights of which they would be in actual possession, than the debased subjects of arbitrary power would be to rescue theirs from the hands of their oppressors. Let us rather no longer insult them with the supposition that they can ever reduce themselves to the necessity of making the experiment, by a blind and tame submission to the long train of insidious measures which must precede and produce it.

“Well Regulated” has nothing to do with the modern definition of Regulated or Regulations. It simply means to be functioning properly.

“The Militia” in this context is anyone capable of bearing arms in their own defense, local, state, or national defense.

Unless “The Militia” has been called into federal service the fed’s have no authority over it.

Correct and there’s absolutely no mention of “regulating” The People.

Even if we accept the modern meaning of “to regulate” unless called into active service by the federal gov’t they would not under the 2nd be subject to federal regulation.

Even as things are today, the guard cannot be federalized without a formal request from the POTUS to the Governors of each state and the Governors have sole discretion on whether or not to then call up the guard.

How many civilians with a gun ever survive an incounter with just the local police, let alone the best military in the world. This shit is all a pipe dream.

How many of them have ever attacked in force?

The last fifty years of warfare proves without a doubt that a determined insurgency armed with typical small arms can bring even the world’s most powerful militaries to their knees and eventually force them to leave in defeat or at best a stalemate.

It’s hard to imagine a town or even a state withstanding a sustained attack from multiple stealth bombers, various attack aircraft, sustained drone strikes, etc., etc., etc. Then being able to defend themselves against a ground force armed with tanks, APVs, etc.

What’s hard to imagine is that those who have taken an oath to support and defend the constitution are going to attack us at home.

Just like the last civil war you’d see an instant splitting of the US armed forces with many going home to take the same positions in their state guards equipped with the same equipment as the regualr federal forces.

We’ve lost control of about 90% of Afghanistan in the last six years and we lost it to a bunch of illiterate goat herders mostly equipped with fifty or sixty year old or even older Russian and British rifles and whatever else they could scrounge.

Keep in mind too that if/when we devolve into another civil war it won’t be a war between states and the federal gov’t for the most part it will be thousands of small conflicts all across the country between local factions.

How long do you think those who remain loyal to the gov’t in charge are going to tolerate substantial collateral casualties among their own without turning against that same gov’t?

Good story !!
The NRA is controlled by the membership voted for and elected . Although far from perfect it is the only game in town , there is a reason socialist fear and despise us . With out the NRA we very well may be digging holes in our backyards and burying our stuff !

Afghanistan October 7, 2001 and counting .
The war in Afghanistan began in 2001 and has cost the U.S. $975 billion, including estimates for 2019. The number grows even more when taking into account increases in the base budgets for the Department of Defense and the Department of Veterans Affairs. 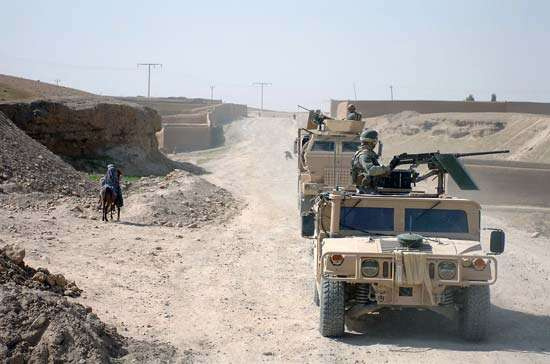 A draw is what America is hoping for in Afghanistan sharing power with the Taliban . Don’t ever underestimate the power of a well funded and equipped resistance . A guy on a ass is just a dangerous as that hummer .

Yeah, because Afghanistan and Iraq have been just a cake walk…

You make very solid points. Unfortunately I have a pessimistic view on the future of this country. I have never seen a political climate this toxic and divisive. If things ever got so bad and we do devolve into another civil war, I too would agree that the military would also fraction off to a particular sides.

Oh, it was just as bad in the 70’s. It was this bad in the early 2000’s, Liberals throwing racist accusations and liar accusations at Bush every 10 seconds. It was this bad many times in our history, the difference is that with social media, it’s amplified but I honestly don’t think there’s a huge divide between the silent majority. It’s just the loudmouth twits that get the attention. 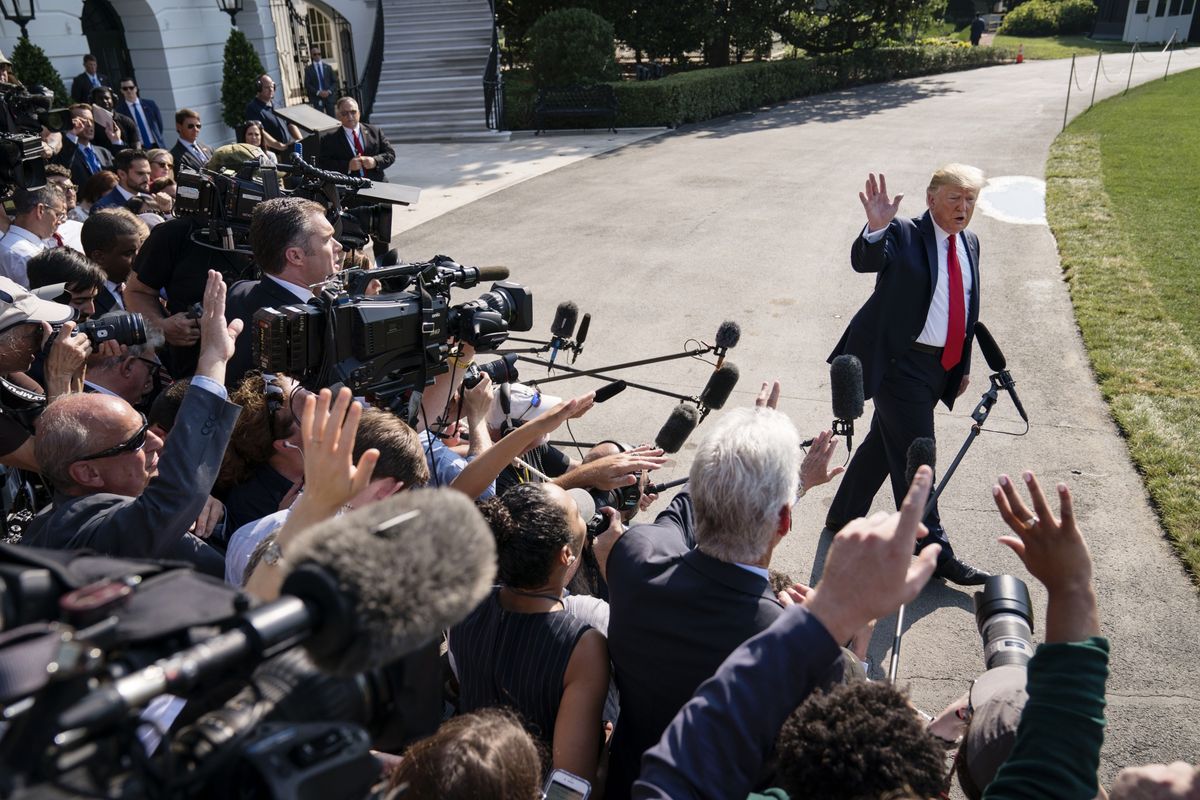 President Donald Trump endorsed an expansion of background checks for U.S. gun buyers following the massacres in El Paso, Texas, and Dayton, Ohio, but said there’s “no political appetite” to renew a ban on military-style rifles.

It’s hard to imagine a town or even a state withstanding a sustained attack from multiple stealth bombers, various attack aircraft, sustained drone strikes, etc., etc., etc. Then being able to defend themselves against a ground force armed with tanks, APVs, etc.

Well, you can’t convince the crowd that wants their guns pried from their cold dead fingers. Eventually the 2A will be amended/modified or eliminated from the constitution…

What do you want, a protracted insurgency in America. Is that your idea of MAGA???

If things ever got so bad and we do devolve into another civil war, I too would agree that the military would also fraction off to a particular sides.

Well you go ahead and hope for that… but it’s rarely happened.

It’s happened in virtually every country that has fractured into civil war including our own.

With out the NRA we very well may be digging holes in our backyards and burying our stuff !

To do what with it later, take on the most powerful military in the world…