The Police Can't Protect You-And Have No Duty To

Don’t leave the court’s out of this. It is they who tie the hands of LEO’s with rulings and politicians then react to pass laws that comply with the rulings.

Just remember that in even a questionable shooting that video could hang you or at least break you in a civil suit even if criminal charges are not filed.

Not very likely I would harm someone breaking into my car; but two or three unexpected shotgun blasts into the air does send a message, especially with a zillion decibel alarm going off. Now, you break into my home, I can guarantee it will not be a pleasant experience. I have a few of these signs on exterior doors. 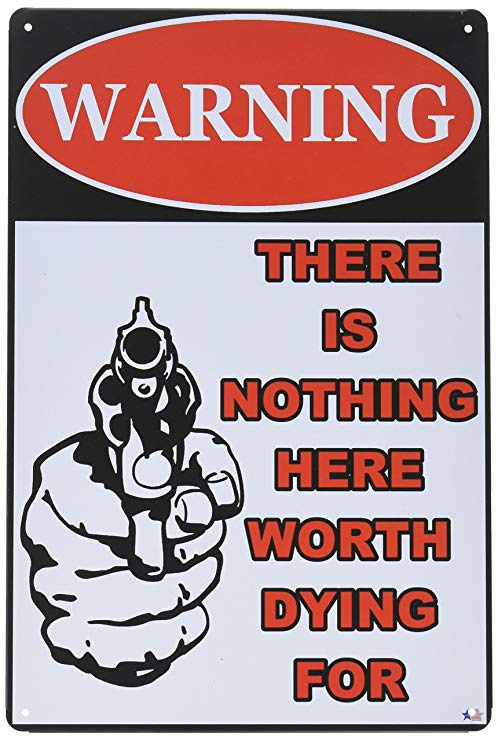 Is any other country at any other time any different?

Has there ever been a “protection force” for citizens provided by the government?

Warning shots fired into the air will get you a quick ride to prison.

In most of the western countries, at least those I’ve been to the police are actually legally bound to intercede when they see a crime in progress.

This is a unique situation here in the US.

Because they’re the strong (enforcement) arm of the government?

Another thug bites the dust.

The MSM will downplay this story as it supports concealed carry. The MSM and the Libs would rather the woman had been shot dead by the thug so they could push for gun laws intended to take guns from criminals…gun laws that do nothing in that regard.

You shouldn’t shoot into the air in a populated area. What goes up will come down.

Shoot at the ground…preferably right in front of the perp.

Firing a warning shot of any kind will land you in jail in virtually every jurisdiction in the country.

If the threat is imminent and immediate you don’t have time to fire a warning shot.

Not in all rural areas. My neighbor has a firing range in his back yard.

Well shooting at a range has nothing to do with what’s being discussed here in a use of deadly force scenario.

If you are going to claim self defense to justify a shooting you have to meet the bar that the threat was imminent, and immediate and that deadly force was the only reasonable solution to the situation.

If you have time to fire warning shots you fail to meet the burden and will find yourself on your way to jail for a short stay before heading to prison.

In my county, if you show a gun or fire a warning shot to prevent a crime and hold the perp for the LEO, you get accolades…not jail time. If you wound or kill the perp, you may or may not go to jail.

The laws with which you may be familiar do not apply everywhere.

No slight to the police, I know a bunch of them and they are generally great people.

What is the saying? Better to be judged by 12 than carried by 6?

Case in point: Scott Israel rewrote the procedures on an active shooter to strike “shall” and changed it to “may”. While children are being slaughtered, the Broward police were given a choice; they chose to hide behind trees and cars.