The Islamafication of Great Britain is Complete!

True! Hence the birth of western civilization and its school of thought!

Wormwood itself is a plant type, an herb. Even from ancient times it was thought to have medicinal qualities such as in being used in cleansing the body. I don’t know about it’s hallucigenic attributes.

Wormwood in Revelation is a star that falls (either a meteor or comet?) that seemingly falls on the seas. This results in many people being killed as those waters are made bitter (poisoned?).

As far as meaning to Christians: I wouldn’t spiritualize it much but take it at face value. We aren’t told any other motivations for why it is named thus other than making the water bitter.

The French Revolution came after the antecedents to the 1st Amendment among State already existed charters in the United States.

The French Revolution directly produced nothing good. It was the revolution that too much of the world has emulated to its detriment followed. This includes numerable horrors in the mold of the subsequent Terrors.

The good that came out of the French Revolution might be only found in how the French have yet to repeat its excesses, like when a kid is locked in a closet with cheap cigars and he can’t get out till they’ve been smoked.

At the risk of sounding like a broken record, when people depart from retaining the knowledge of the Lord they may reach a time when, seemingly as if to clearly mark them as having departed, the Lord turns them over to depraved minds.

Or put another way Scripture is so very clear on the wrongness of homosexuality that to reach a point you compromise on it you must have already compromised a lot of other stuff away first. One usually doesn’t simply wake up one morning and decide “I’ll blatantly and willfully depart from the truth today!” but instead they proceed unawares from a little compromise here, and a little there.

but instead they proceed unawares from a little compromise here, and a little there

The Cultural Marxists aim is to do just that. Keep wedging away until the believers become sympathetic to their ways instead of holding true to their beliefs. Its central to their plan at changing society fundamentally by attacking the foundations of it, and Christianity is one of those foundations.

We aren’t told any other motivations for why it is named thus other than making the water bitter.

Which in a way is ironic, because the actual Wormwood that is used in Absinthe is actually bitter water.

The Declaration of the Rights of Man and of the Citizen, adopted during the French Revolution in 1789, specifically affirmed freedom of speech as an inalienable right. The Declaration provides for freedom of expression in Article 11, which states that: The free communication of ideas and opinions is one of the most precious of the rights of man.

The First Amendment to our US Constitution came in late 1791.

The First Amendment was adopted on December 15, 1791 as part of the Bill of Rights—the first ten amendments to the United States Constitution. The Bill of Rights provides constitutional protection for certain individual liberties, including freedoms of speech, assembly and worship.

I was referring to the use of the herb to cleanse the body of parasites and trying to distance myself from being accused of saying that the Lord, in causing the waters to become bitter, is doing that.

I’m not going to call people, even the worst sinners, mere parasites on the earth and I’m certainly NOT going to even offer the Mother Earth and sustainable growth crowds a sprig of herb to seize on as if the Lord (or I) agreed with them evena teeny tiny bit.

That’s why I made it clear that the face value reason for the name is enough to explain it without digging deeper.

The 1st had its antecedents in State Charters before the tragedy of the French Revolution.

Just as I indicated.

The American Revolution was in no small measure about keeping our rightful free system of English laws, or the common law.

The French Revolution was about discarding French common law to have administrative law.

But understand the differences between these as to why which you choose is so very critical.

Under common laws, or natural laws as then understood and accepted, privileges or immunities are not derived from the state but are recognized by the State. They preexist the State, which is to say the federal government of the United States, and the State is doing well when it does not trample them.

Over on the continent, back in Europe, men had long criticized common laws as being arbitrary but the supreme irony is that for those who advanced administrative law in its place that their only solution to the asserted arbitrariness of common laws was a form of laws that was expressly arbitrary.

You see, administrative law as a law firm does not recognize any preexisting conditions or privileges and immunities apart from the politically determined law of the State.

That means that unless someone write out what should be the Rights of Man, and it be enacted in statute, there would be no rights for men.

Thus we can look at how the French essay you mention and the 9th Amendment and A4:S2:C1 serve the same function but are so completely different.

The French essay has to spell out the Rights of Man or else there would be none under that form of laws. That means literally spelling them out.

The American clauses in the Constitution, since we expressly were to retain our Common Law as it then existed, didn’t have to spell out the Privileges and Immunities retained because those were already in existence.

I would also point out that under administrative law that whatever the States gives it may also just as easily take away, thus there is no contradiction that the same people who authored the essay also authored the Terrors and tried to dechristianize France. If all privileges or immunities are political in nature then politics of an ordinary nature can just as easily take away what is given.

So on that basis you would also be wrong, for the very sort of “right” the French granted is different than that the 1st Amendment acknowledges.

It was the legally perverted influence of those trying to make us a land of administrative law.

Christians seem to disturb the peace by preaching the bible BUT Muslims can BLOCK the streets and it appears to be just fine . 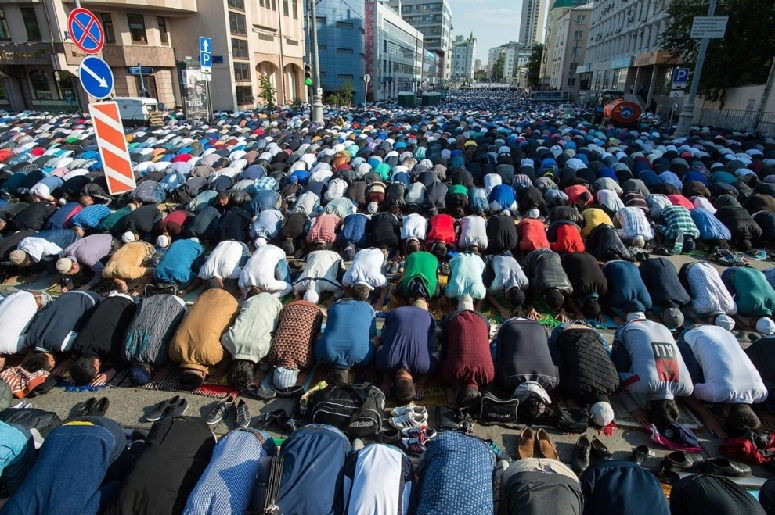 Just a wee bit of photoshopping (well, quite a lot actually) and you could make that look like long lines of men where each has the head of the next shoved up his can… 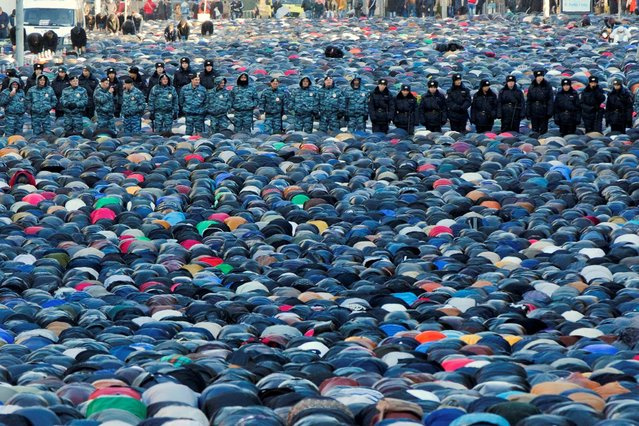 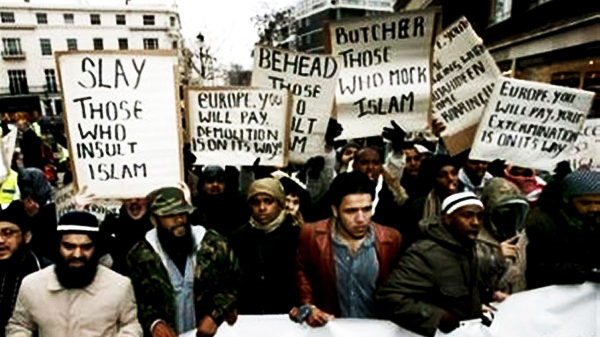 Again, I say you are wrong…or perhaps misguided.

The Declaration provides for freedom of expression in Article 11, which states that: The free communication of ideas and opinions is one of the most precious of the rights of man.

This does not imply administrative law. It implies that freedom of speech is a right of man, not something that has to be permitted by law…the same as our 1st Amendment does in its carefully worded form. Neither the French Declaration nor our 1st Amendment GRANTS the right to free speech. They both acknowledge that it exists.

The French Declaration says The free communication of ideas and opinions is one of the most precious of the rights of man.

…and the French Declaration preceded our 1st Amendment.

That some colonial state charters may have included provisions for freedom of speech is not relevant to a discussion concerning nations recognizing it as a right.

I’m not talking about “colonial” charters but the Constitutions of the States within the United States.

The United States came before the French Revolution.

As for the supposed similarity, again, the Privileges and Immunities of Americans were not to be dependent on the State, they preexisted the several States too and were a particular thing in their own right as objects of English Common Law. That is why A4:S2:C1 or the 9th Amendment didn’t need to enumerate them.

You may also note the particular structure of the 9th as mentioning “other rights retained”. That has significance towards the first 8 Amendments as it says something about where those came from. They were themselves “other” to the “other”, rights retained. This means that each of the first 8 amendments are in reference to particular common law rights as known among the colonies that became the States or they may be elaborations on those same preexisting Privileges and Immunities.

But with that Declaration of the Rights of Man BECAUSE by intent the French had cut themselves off from all preexisting Privileges and Immunities they had to erect (on a political basis) something or there would be no privileges or immunities to be had. And the essay actually didn’t even do that … it was easily cast aside to have the Terrors. It was ineffectual.

Here is where you are missing the mark: the DotRoM was a mere political statute in form, intended to show how other French laws should be crafted after it; the constitutions of the several States, the federal Constitution and the BoR are Laws and not mere statements about what laws should be. What the Laws themselves should be is derived from the common Law.

Christ will, on His returning, personally slay the armies of the Beast with a word. Then He will have slain everyone who has taken the mark of the Beast.

Have no fear about these men, for unless they repent in light of the only Gospel they are passing away into the outer darkness, damned with their false prophet. Their anger and rage can do nothing that lasts. Nothing.

I’m not talking about “colonial” charters but the Constitutions of the States within the United States.

You’re playing with words. By “colonial state charters”, I was referring to the original 13 state charters…same as you did in post #29.

It is not high on my list of priorities to convince you that my original sequence of events is correct. The French declared freedom of speech to be a right in 1789. The US did it in 1791. Neither the French nor the US granted the right…they recognized it as existing.

Since this has nothing to do with the thread topic, I will not continue this conversation.

Actually, by its specific concept of laws the French were granting the right. They had intentionally cut themselves off from non-political privileges or immunities.

This is pretty sickening!

I am wondering why there is a security guard of some kind just standing watching there and not doing anything while the poor guy is getting the crap beat out of him? This truly is a despicable display of cowardice. WTF?