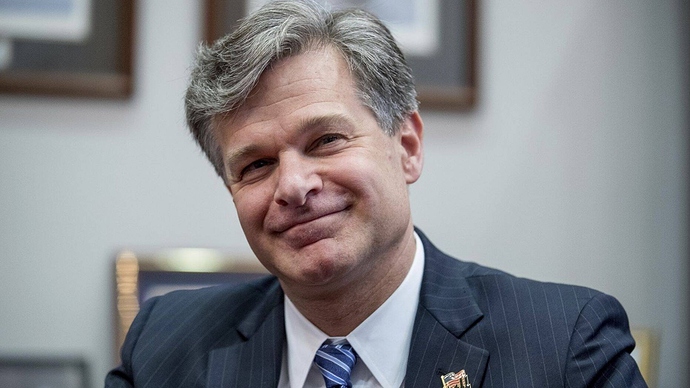 If you are a white person and have interests that relate to advancing and supporting white people, you are now on the same level as ISIS. This is absolutely disgusting. I am a white person, I am a nationalist because I love this country, and I want to stop seeing white people getting the shaft because of this obsession with “diversity and inclusion” bullshit that is sweeping the nation like cancer. We used to be a country that prided ourselves on our freedom of speech and association. Now that makes you a terrorist. The FBI is worthless and incompetent and should be permanently stood down.

The FBI has elevated racially-motivated violent extremism to a “national threat priority,” in yet another sign that the U.S. government has finally woken up to the threat posed by white nationalists and neo-Nazis at home and abroad.

In a hearing before the House Judiciary Committee on Wednesday, FBI Director Christopher Wray outlined several concrete steps the agency had taken to combat violent far-right extremists, explaining that the “national threat priority” designation puts those groups or individuals on the same footing as ISIS” in terms of the resources the FBI will devote to it.

Wray’s announcement comes just two weeks after FBI agents arrested eight members of the violent neo-Nazi group The Base, three of whom were allegedly discussing firing into the crowd during the large pro-gun rally in Virginia last month. In recent months, the FBI also foiled two synagogue bombings, Wray said.

Last September, DHS unveiled its new counterterrorism strategy that, for the first time, recognized white nationalism as a major threat. Congress has held well over a dozen hearings on the matter, and lawmakers have called on the State Department to designate international far-right networks as foreign terror organizations, and on DHS to produce threat assessments of those networks.

“The decision would be based on intelligence analysis and obviously the potential increase in these types of attacks, whether the investigation shows they are a hate crime or racially motivated, and whether they can be tied to a larger organization or ideology rather than an individual hate crime” said Concordia.

Citing Justice Department sources, CBS reports that more federal arrests targeting neo-Nazi or white nationalists are coming down the pike, including people with ties to networks in Europe, Ukraine, and Russia.

The FBI Just Put White Nationalists and Neo-Nazis on the Same Threat Level as...

And what exactly is a “white nationalist” FBI? It’s it perhaps anyone of European origin who wants to see their traditions and society (western civilization) survive for their children? Truly, America was founded by literal Nazis based on that definition!

The same FBI that illegally spied on the Trump campaign and ruined the lives of countless people because they supported a candidate that the deep state didn’t like is now going to loosely define “white nationalists” as those who have views that they don’t like and who talk to people who share those views in other Western countries.

I hope they have space in SuperMax for 100+ million people whose only crime is giving a shit about their people, culture, history, and heritage.

Be careful kids - hanging up a piece of paper that says “It’s Ok to be White” now makes you the same as an ISIS terrorist that tortures and murders thousands of innocent people.

The FBI is literally retarded.

Here’s how DHS defines it:

White supremacist violent extremism, one type of racially- and ethnically-motivated violent extremism, is one of the most potent forces driving domestic terrorism. Lone attackers, as opposed to cells or organizations, generally perpetrate these kinds of attacks. But they are also part of a broader movement. White supremacist violent extremists’ outlook can generally be characterized by hatred for immigrants and ethnic minorities, often combining these prejudices with virulent anti-Semitism or anti-Muslim views.

So…if you are white person who is opposed to illegal immigration and doesn’t like the fact that you are becoming a minority in your own country as a result of illegal immigration, and there are no laws on the books that categorize you as a protected class (meaning it’s ok to discriminate against you), and you are opposed to the Islamification of the US…you are now a terrorist. Wow.

Diversity WILL be celebrated…or else prison. Oh say can you see!

This is why it’s important never to fedpost and to immediately report those who do. Don’t ever talk about anything in violent terms or even make any references to violence. Denounce violence in all forms. Having opinions that are unpopular with leftists and centrists makes you a nuisance and will probably land you on a few lists somewhere. You might even get paid a visit for a quick chat. Five important things to remember:

If law enforcement just wants to chat and ask you some questions that means they don’t have enough to arrest you and are looking for you to say things that will allow them to do that. Don’t be stupid and play along. Just invoke the Fifth and SHUT THE FUCK UP.

This applies to ALL interactions with law enforcement. I support the important work that the police have to do…but it’s important to know your rights and to exercise them.

The DNC and Hillary need to be on the same threat level as ISIS !!!

Boy…it sounds like John Brennan and the Obama administration are still running the FBI.

Apparently White Nationalists are the only domestic threat!!! We white people must be the only group for separating the races .The FBI must have forgotten about the Nation of Islam and the Black Panthers. Oops, I forgot, only us whites are racists.

Exactly. We are the lowest of the low for wanting to stop the illegal invasion of our country and calling out the death cult otherwise known as Islam.

They are in cahoots will the international globalist, one-world army of spies and don’t have allegiance to America. Wray’s face is sneaky. Trump should set up his own office in their bases and just start interviewing them with lie detectors and sodium pentothal.

At this point, a white nationalist is any white person that isn’t a leftist. Good news is…they can’t lock us all up.

Question for all of the feds monitoring this board

How does it feel to have to monitor PB all day? Do you really believe you’re helping your country by doing this? I bet when you joined the FBI you thought it was going to be like the X-files. You probably thought that you would be going on all sorts of adventures and that you would be America’s first line of defense against the most deadly of threats. You probably thought you could brag to your friends and family about all of your exciting cases and all of the top secret information that only you and a few other people know. Maybe then they would finally respect you. Maybe then your parents would finally be proud of you. Instead, you spend your days browsing a random message board because your boomer bosses, who don’t know anything about the internet, thinks that anyone who congregates on non-establishment sites like this are neo-nazi terrorists that are literally Hitler. Are you okay with this? Are you okay having to do this for the rest of your life?

Those who can, do.

Those who can’t, teach.

Those who can’t even do that, work for the government.

Diversity is death with an ''i", as in I die by diversity. But we are NOT allowed legally to say so, or in many countries of the formerly free West…you can jailed, fined, or censored. Why? Well because diversity is a well-funded State Cult. America, welcome to what we have been dealing with in Europe for some time.

We needcto a nationwide Anti PC Revolution and tell those PCistas and the MSM to go F themselves.

Those who can, do.

Those who can’t, teach.

Those who can’t even do that, work for the government.

And their Retirements and Pensions are so gigantic it causes Inflation & the national debt.