The Alarm Has Been Sounded Off By FED Chair! LIVE Streaming

Fed Chair states that the National debt is on a unsustainable path with current trajectory citing the inefficiency of Governments handling of entitlement spending, healthcare as being a good example.

The next two people that will be interrogating Powell is Occasional Cortex and Maxipad Waters and I am sure it is going to be a doozy in which updates to that expected circus side show will be here. Get your popcorn ready, because I am sure its going to be highly entertaining! 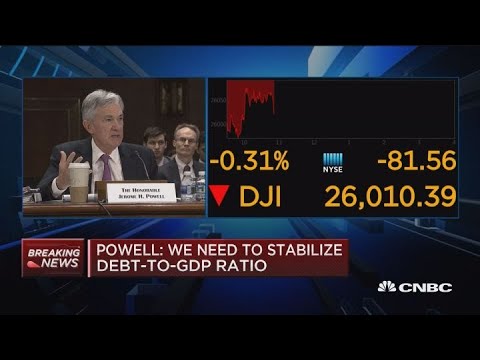 This is the one thing Trump is winning at… running record deficits and adding rapidly to the debt.

So was Obama, who tripled the debt more than any president before him combined. Lets not pretend that he didn’t either as all other presidents before him also contributed!

Try Again fart face! This is not a partisan issue!

Bashing Trump is a Pavlovian response for Prag.

He can’t help it.

So was Obama, who tripled the debt more than any president before him combined. Lets not pretend that he didn’t either as all other presidents before him also contributed!

Obama reduced the deficit… what has trump done to reduce it?

Again stop your bullshit lying! He did no such thing! OH and BTW do you know difference between the deficit and the Fed DEBT? I bet you don’t!

The spending slowdown was caused by gridlock, not by Obama moderating his demands (point: conservatives). It is important to recognize that Obama did not stop trying to expand government after 2010. The president’s eight annual budget requests gradually upped their 10-year revenue demands from $1.3 trillion to $3.4 trillion, while proposing an average of $1.0 trillion in new program spending over the next decade. His play, in short, was to gradually trim the budget deficit by chasing large spending increases with even larger tax increases. The Republican Congress stopped him. Obama’s most important fiscal legacy was a sin of omission. Despite [promising]

to confront Social Security and Medicare’s unsustainable deficits, the president refused to endorse any plan that would come close to achieving solvency. This surrendered eight crucial years of baby-boomer retirements while costs accelerated. With baby boomers retiring and a national debt projected to exceed $90 trillion within 30 years, this was no small surrender, this was Obama’s legacy.

Yes - an unsustainable path where we have to borrow our own money at interest paid back to the private Federal Reserve. We’d owe far less if the Treasury were issuing the money as per the Constitution.

Not to mention Obama’s little trick of massively expanding spending in his first year, and then having the nerve to claim he was a deficit hawk because a republican congress wouldn’t allow him to keep the gravy train rolling.

Or better yet, Government issuing its own debt free notes like Lincoln did!

This is the one thing I was always in 100 percent agreement with Ron Paul on. End the Fed. The monster from Jekyll Island has tortured this country for long enough.

The deficit began ballooning when the Democrats retook Congress. They ran claiming that Republicans were irresponsible but then reall showed us what spendthrift was like.

And the so-called “moderate” republicans were right, or rather Left, there with them. The only time they resist growth in spending, even timidly, is when there is a Democrat in the WH. That’s how they could vote for Part D and then against Obamaharm.

And just for the record the Democrats understand what the nitwit moderate republicans do not: that they will never pay a price with their base for being spendthrift whereas the republicans always will. Thus even when, or especially when, there is a Republican president the Democrats are usually perfectly willing to reach across the isle to moderate republicans to form a majority of those willing to spend freely. It’s a win-win for them and a ultimately-lose-for-winning for the moderates.

Yes, Obama helped run up spending. As a senator. As POTUS it was just yet more of the same.

Well, that in of itself is a loaded statement. There is no such thing as coincidences in life. For example:
25 years after President Andrew Jackson (who being the only President in US history to pay off the national debt, knew before anyone what the banks motives were and vehemently chased them away), Lincoln introduced a debt free currency called “Greenbacks” in which under his tenure the economy flourished. Shortly after his assassination, the banks came bank who in turn created another depression in the 1870’s by limiting the money supply. It was pretty much the basis of Frank L Baum’s children’s story book titled “The Wizard of OZ”.

If you are a US citizen, you have access to millions at the Federal Reserve Bank System. The only thing you need, is your physical Social Security Card that was originally issued to you.

Step 1: On the back of your Social Security Card, there is a string of RED or BLACK numbers and a letter at the beginning. That letter corresponds with one of the twelve Federal Reserve Bank routing numbers.

Step 2: Once you find your routing number, go to any of your online banking/credit cards/bill pay. Pretty much anywhere you can access a bank account.

Step 3: Enter the routing number you found that corresponds with your letter. For your account number, enter your Social Security Number with no dashes.

Step 4: Proceed, congratulations, you now have access to YOUR account at the Federal Reserve, with money you legally own by law.

End the Federal Reserve. No private entity should be able to print money and collect interest on it.

What system would you replace it with? What would be your proposal?

The government issuing Money through the Treasury only.

So in other words back to Lincoln’s premise!

Did you know it is actually unconstitutional for the several States – and arguably the federal government too on account of the non-grammatical capitalization of “Money” when it speaks of appropriations (such capitalization serves a specific purpose, for it indicates a specific sense of the word is being referenced, which excludes all other possible such senses of the word … I’ll repost an old essay in a moment about that) – to pay their obligations with Federal Reserve Notes?

That it doesn’t matter one jot that it is reckoned to be money because it isn’t Money?

Specifically it says the States shall not use anything but gold or silver coin. That excludes FRNs which aren’t even backed by gold or silver.

In the past I’ve suggested suing a State based on this clause, requiring them to submit payment or whatever in constitutional Money if asked to. Moreover I’ve suggested as using it as a basis to challenge all forms of sales tax on the acquisition or transfer of gold or silver because that amounts to taxing using Money.

Now for the old essay…

Colloquial: an adjective, used to indicate ordinary or familiar conversation, not formal or literary.

To that I would also add: “not legal usage either.”

There’s a reason it’s called legalese even when you are dealing with common law standards of legal practice rather than so-called administrative law standards of legal practice (the difference between these two concepts of laws and legal theory may be summed up in how they are deemed to be founded … 'nuff said about that since the foundation of laws is beyond the scope of a short piece about legal usage of language that is also limited in its scope).

If you have ever read the United States Constitution or the text of many different ordinary laws you may have noticed odd times, for example, when words are capitalized OUTSIDE of the regular rules of grammar. The capitalization is not intended to be haphazard in such cases and it actually has meaning related to the specific context.

Generally, such instances may serve a structural purpose or they may occur to indicate something in particular as a matter of usage — either indicating some particular ‘kind’ or ‘class’ of subject if not a specific subject proper.

For an example of how usage like this can serve a structural purpose in a law, Article 1:Section 8 of the United States Constitution is actually a single sentence of legalese that begins with the words: “The Congress shall have Power To,”. Each time the word “To” is repeated in this article it structurally ties the clause being presented back to those first five words. So you could represent each clause of the article as follows in colloquial speech:

“The Congress shall have Power to regulate Commerce with foreign Nations, and among the several States, and with the Indian Tribes.”

“The Congress shall have Power to provide and maintain a Navy.”

So the construction of A1:S8 is such that each clause in the “sentence” is separated and highlighted by a “To” (and not a “to”) at its beginning and a “;” at its end.

This was just one example of how colloquial grammar gets thrown out the window at times when using legalese.

Another that I’ve indicated is that the language of a law may include such usage so that the thing capitalized represents a specific thing or a specific class of related objects. In such instances you can say that when a term is capitalized it is “specific usage” while the same term in a similar context that IS NOT capitalized is “general usage” (i.e. not meaning anything In Particular).

Several examples, contrast between specific usage and general usage, of this are found in the US Constitution.

In contrast, the language in the 14th Amendment intended to enumerate the Power to Congress to respect civil rights (as opposed to “inalienable rights”) that the several States may not disparage is focused on the words “privileges or immunities”. Here the usage HAD TO BE general because, prior to Congress actually acting to pass some particular civil rights bill, there would be NO WAY of knowing what sort of “privilege or immunity” Congress might respect. They may require the states to allow for some “privilege” or they may grant Americans some legal “immunity” but what those would be is completely unknown beforehand.

Another example of specific v. general usage of a term is found with the word establishment — which occurs exactly twice in the whole of the Constitution: in Article 7 (“Establishment”) and in the 1st Amendment (“establishment”). In both cases the context is similar: something authoritative is being respected which (once it is respected) has administrative authority to compel the People to live under it. In the case of Article 7 what is being respected, the Constitution of the United States of America, would factually drive the People and the several States from remaining under the Articles of Confederation any longer. In the case of the 1st Amendment it could not be known in advance WHAT SORT OF “respecting an establishment of religion” might be attempted or might transpire at all — so not only is “establishment” general usage but so is “religion”.

In both cases the term establishment means exactly the same thing (they just relate to different subjects that may be respected) and even the contextual considerations are similar. It is just that in the former case something specific is being respected while in the latter case nothing specific (literally, as in “nothing Specific”) is being forbidden.

There is, of course, potentially much more to this kind of a discussion; however, this may be enough to get you nice people thinking…

Or, at least that would be my desire.