Some presidents send pallets of cash to people that chant “Death to America”. (Man that was hard to write.

) While others send freedom pills. What’s your choice? 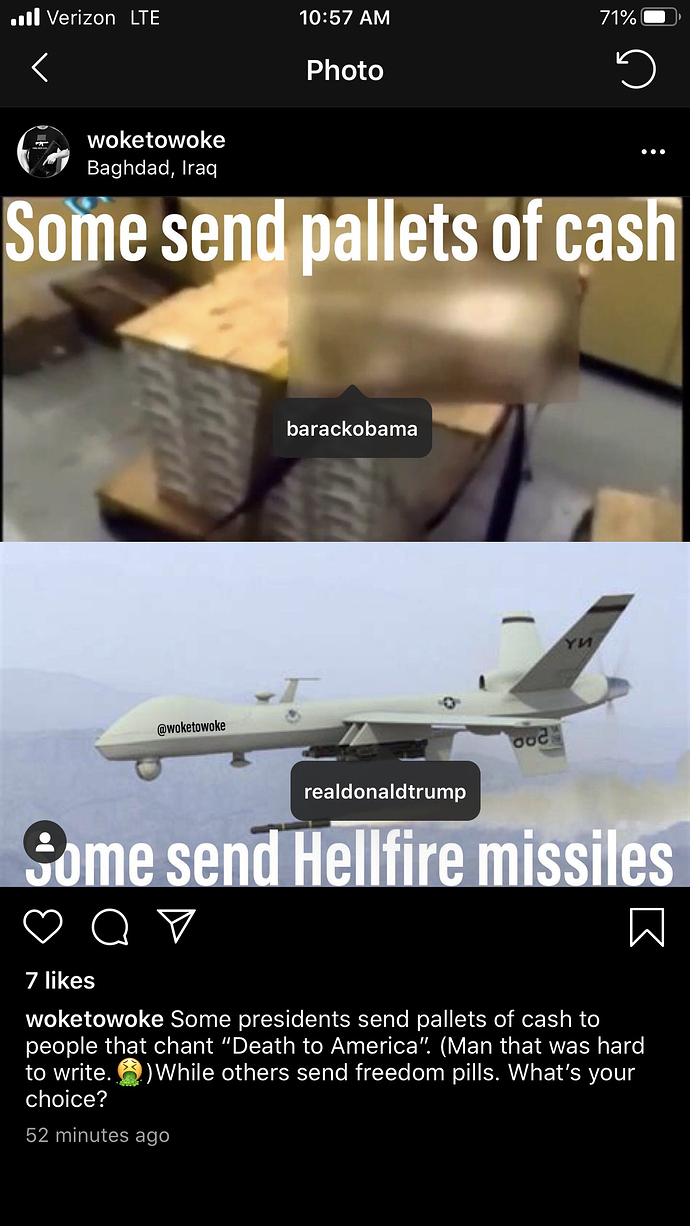 And. Some presidents keep their word and others don’t.

Let’s not forget that Hussein Obama had these terrorists in the White House as well. Absolutely disgusting and completely un-American.

What this has shown me is that the left is completely aligned with Islamic terrorists. They show zero sympathy for the Americans that were killed as a result of Iranian aggression and cowardly terrorist acts. They are falling all over themselves in grief and despair over a brutal tyrant and torturer getting karma delivered via drone. These people need a wake up call.

Hey, it’s my 2nd favorite austere scholar! Glad you chimed in. You are 100% correct in this case sir. Trump gave them a stern warning (that would be his word to you) and they didn’t listen (that would be missiles to them). Glad this POTUS keeps his word.

These people need a wake up call.

They just might get it if the Iranians decide to activate their terror cells which we know are all over the country. The US got flooded with Muslims during Obama’s reign of terror.

Messed up thing is when something does happen the left will just blame Trump for it anyway.

I recommend carpet bombing with skids of $100. bills.

Obama was the engineer on the Bellevue Express. As if we didn’t know that money was channeled to fund terrorism. Not so says Barry; it went to fund doily making classes.

He kept his word and this is only a small taste of what they could expect if they continue escalating their aggression.
Next time a few missiles should be sent Special Delivery to Rouhani’s home.

Each “boomer” carries 20 Trident D-5 missiles, and each Trident packs up to twelve nuclear warheads, each six times more powerful than the bomb dropped on Hiroshima. The United States Navy maintains 14 Ohio-class ( boomer ) nuclear missile submarines. So a single sub has more firepower than all the wars in recorded history. JUST ONE SUB.

Let’s not forget that Hussein Obama had these terrorists in the White House as well. Absolutely disgusting and completely un-American.

The lefties think feelings matter. If they can just talk about it everyone will be friends and the world will be a better place.

Except the world doesn’t work like that. Terrorists don’t care about feelings and live to exploit the fact that some people do.

Obama was an absolute stain on this Nation.

They remind me of a person who grew up in an abusive home.

They don’t want to be beaten up.

Yet, when someone steps in and tells them they can press charges, they turn to defending their abuser.

They just might get it if the Iranians decide to activate their terror cells which we know are all over the country. The US got flooded with Muslims during Obama’s reign of terror.

Best thing that could happen. We’d lose a few citizens, but it would put Islamophobia and deportations over the top.

Terror cells? Every filthy fucking muslim in America is a bomb looking for a target. Given opportunity they will kill anyone. 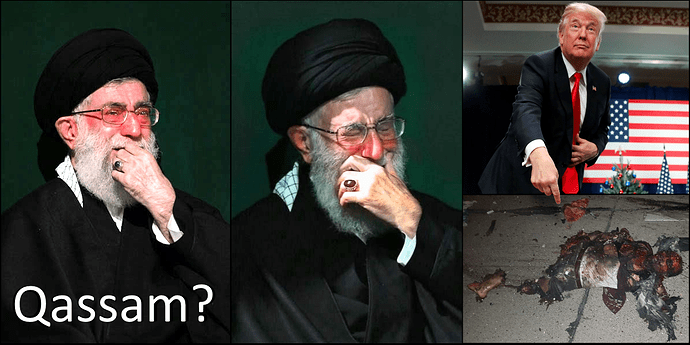 No, it’s simpler than that, I think. They believe that anyone who hates America must have something on the ball.

They didn’t escalate anything, Trump did and now he’s looking down the barrel of a war, another expensive and senseless war. He’s the one that has complained about America wasting seven trillion on forever wars in the ME. And now he escalated another war to destruct from his impeachment and presumably help his re-election like he blamed Obama for doing.

Given opportunity they will kill anyone.

And Trump seems to have just provided it.

Let’s let you be one of them insignificant few, huh big???

Let’s let you be one of them insignificant few, huh big???

Or maybe you! This place would improve if you weren’t here anymore to shitpost in every thread!