Red flag laws are unconstitutional as hell and violate the 2nd, 4th, 5th, and 6th amendments to the constitution. I don;t give a shit if these clowns think they “work”, which they don’t, they are illegal. Lindsey Graham : Basically anyone for any reason can send the police to your house to confiscate your firearms. Circumventing the Constitution, turning every day regular citizens into criminals. Which will lead to homeowners that are innocent and have no reason to turn over their privately owned firearms into victims of their local police departments. I cannot stand Republicans that push for taking away more rights from people as if we haven’t lost enough. Stupid Bastard.

It’s amazing how fast “conservatives” will move when there is a hot button issue that will allow them to strip unalienable rights away from the American people.

I would like to hear what Lindsey thinks about the fairness of an ex parte hearing which grants law enforcement the power to forcefully enter a home and take the weapons of someone who has no idea a court has issued a judgement against them.

It’s in response to the relentless attack by Democrat socialist liberals who want to ban guns! Dems and libs do nothing but exploit these mass shootings for political gain and to fund raise and then there is their DO SOMETHING mantra!

Is the red flag law ideal, NO but it could have stopped the Sandy Hook shooter, the Dayton shooter and the Colorado theatre massacres because all three of those nut jobs were on police radar but nothing could be done because of laws on the books to “protect” everyone’s rights including the insane and mentally ill.

Liberals fought to protect the civil rights of the mentally ill until the laws were changed and State mental hospitals closed but are relentless in wanting to take away the 2nd Amendment rights of low abiding and sane citizens.

It’s the kind of craziness that leftist bring to Government.

Ohio is unveiling plans to seize weapons from those they deem to have mental illness, which they haven’t defined. Governor DeWine just announced this crock of shit.

I know a lot of people from South Carolina and no one is really sure how this chump keeps getting elected. Nobody likes him.

Yeah, the government will determine who is mentally ill. They should start with all the faceless bureaucrats, the squad , the House and Senate and Hollywood.
What criteria will they use? Will they be like Schmobama and those that oppose them or disagree with them???
If they determine a person is mentally unfit to have gun or come to the house to unlawfully confiscate weapons, will they put them into
" REEDUCATIONAL THERAPY "???

Lindsey Graham : Basically anyone for any reason can send the police to your house to confiscate your firearms.

It’s amazing how fast “conservatives” will move when there is a hot button issue that will allow them to strip unalienable rights away from the American people.

I would like to hear what Lindsey thinks about the fairness of an ex parte hearing which grants law enforcement the power to forcefully enter a home and take the weapons of someone who has no idea a court has issued a judgement against them.

…but are relentless in wanting to take away the 2nd Amendment rights of low abiding and sane citizens.

I think all of you should listen carefully to every word Graham says in the video as related to the red flag grants.

I think I read in another article that the gun owner would have a way to regain control of his guns later.

If the above is not the case, then I agree that this is unconstitutional. We do have other laws that seem that way to me, based on suspicion of ill intent…such as no-fly lists wherein people are not allowed to fly on commercial airlines and terrorist watch lists wherein people are designated as terrorists and subject to targeting by drone missiles. I am not against either of those existing because of the threats involved.

I am definitely against gun confiscation based solely on the word of a family member or a disgruntled neighbor diagnosing a gun owner with a psychiatric problem.

If all I had to do to keep someone from driving a vehicle on public roadways was to tell the police that I saw them texting while driving, there would be several of my associates using buses to get around. This is a ridiculous comparison to the red-flag proposal, but not far off.

Listen to what Graham actually said. If I misheard him, I retract my comments.

Well at least one judge is willing to rule it down in one case in a state that was first to adopt such a law. 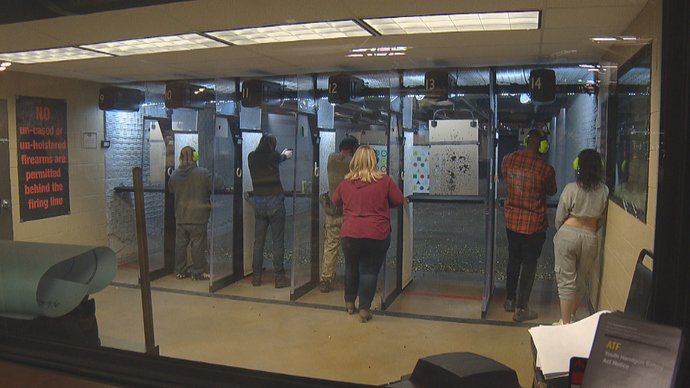 For the first time, a judge has denied a request to take away a man's guns under Colorado's new red flag law.

Yeah, the government will determine who is mentally ill.

That’s not at all how red flag laws work.

I’m curious, do you think that firearms should be kept out of the hands of the mentally ill?

He does not say that the gun owner would be subject to confiscation without a hearing.

Are you taking the word of a slimy politician over what the actual laws say? The entire point of these red flag laws is that the confiscation happens first, then the court appearance occurs. It is denying someone their property and constitutional rights without due process.

I’m wondering who’s word you’re taking. These laws are somewhat different, one from another as they are local. Also, I’m not aware of any that allow confiscation without an initial hearing before a judge. And removals are temporary.

In the United States, a red flag law is a gun control law that permits police or family members to petition a state court to order the temporary removal of firearms from a person who may present a danger to others or themselves.

Just wondering can a nitwit claim you made a threat and then have your carry permit taken without due process ?

If the owner is deemed a threat

During hearing with only prosecutors and law enforcement making their case before a judge.

Yes…that’s exactly what can happen. You then have to petition the court that you are not a threat and to have your confiscated guns returned. Of course, the accused gets to eat all of those legal expenses. Can’t afford the legal team? Then the state keeps your guns and you can’t buy new ones.

Mean while your guns are stored in a trash can rusting away for YEARS .
All states allow orders to remove an individual’s firearm to be issued ex parte , meaning without notice to the individual. Though the ex parte order can be executed quickly, it is brief in duration. A court hearing for a final order to remove the gun for a longer period of time generally follows, and at this hearing, the individual has the opportunity to contest the order.

Seems a lot of people here with mental illness are concerned that they may loose their firearms.

How do you define temporary??? Some taxes were meant to be " temporary " and are still in effect. The accused should have the right to defend themselves from the Red Flag Laws from the start.I assume the burden of proof is on the prosecution to prove mentally unstable or a threat.
The Red Flag Laws are a Red Flag to the states power.