Should we test people over U.S. history to give them the ability to vote?

Theoretically speaking, if the 14th amendment was not in place, would you agree with U.S. citizens being required to pass a U.S. History test before getting registered to vote?

I know, the government affects everyone, and therefore everyone should have the right to vote. However, there has been, ever since the 60’s (it’s more obvious now) for socialism and for social justice as priorities in politics. People have stated that the biggest threat to the U.S. are white males. I worry that they will get the country in trouble by their ignorance, and the U.S. will become a Communist nation, ruled by a majority that could get out of control. These people obviously have not learned what socialism and authoritarianism can do to a country, and everyone else will have to suffer the consequences. Therefore, I propose the idea that one would have to actually KNOW U…S. history (and world history) in order to vote. Those who do not learn history are doomed to repeat it.

I’d say absolutely. Maybe then we won’t have to deal with elected idiots like AOC. Ideally, they should be able to spot fake news and do simple fact checking.

Having known a woman who insisted “police in Arizona are racist against Hispanics because Arizona is ‘next to Mexico OR SOMEPLACE LIKE THAT’, I say not only history, but geography and basics, much like the U S Citizenship test, on our form of government.

Functional illiterates should not get a choice in who becomes our Commander in Chief of the U S Armed Forces nor any representation.

We used to have a test - it was called HIGH SCHOOL!

I don’t know how old you are @FlameHeart but they used to teach civics and history. I think they dropped civics and history is now one big apology for American success. It’s a joke. We don’t need a test. We need to fix our schools. They are garbage.

It’s pretty creepy that you liberals are reading this thread, which you just admitted at the other forum. Lucky for you guys, cyberstalking is a federal crime, punishable by up to five years in prison and a fine of a quarter of a million. This site reads your IP so if you ever sign up, they can track your IP. I wouldn’t recommend signing up. 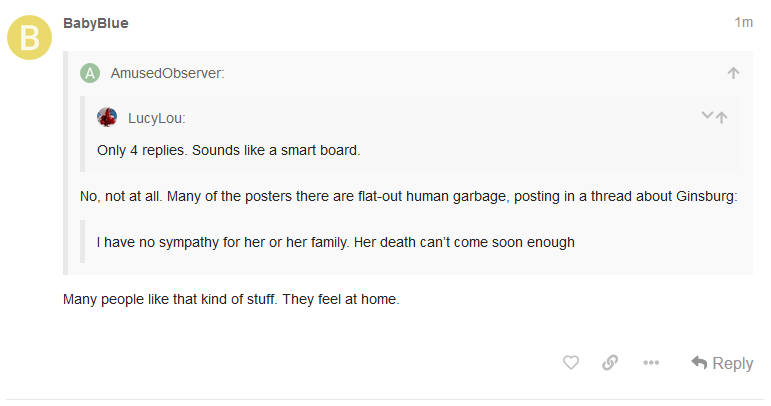 So that @Patriot and @KVN know what’s going on…

First you would have to locate teachers that have certain amount of understanding of our Constitution and BoR’s…and you’re not going to find it in lib dominate schools…or lib media.

Of course when I say lib I’m not talking about true liberal…but they’re about as rare as Bigfoot.

Unfortunately I think you’re right. The schools are too far gone down the hole. Group think is a dangerous, dangerous ideology.

Let them look. Following young women around the internet is not normal behavior. Let them declare publicly who and what they are.

They started out by seeking out people they don’t like, then when those people moved away from them, they follow. Pretty sad. I know I know waving hand high in the air…pick me.

Circle jerks are boring, and their flakey boy randomly turns on everyone. No wonder those lonely bitches are following you around the internet. lol

and the Democrats filibustered the Civil Rights Act of 1964.

I realized, after I posted it, that it sounded like I was asking as opposed to identifying them as the two questions that I believe should be on the test, but I was too lazy to fix it and I knew y’all would get it right anyhow.

The history test idea falls under ‘be careful of what you wish for’- once the Dems again control the levers, the test would “evolve” into things like:

That just cracked me up.

Remember when the gays said they wouldn’t tell the rest of us how to live if gay marriage passed? Fast forward to today and we are being told what cakes to bake and that we have to accept Drag Queen story hour for our kids. Think what @Wazoo2u2 said is too crazy to happen? Elect a bunch of leftists and wait 10 years.

The old expression “give them an inch” comes to mind. They keep claiming it’s about equality and yet they keep demanding special privileges that don’t apply to everyone else.

It’s sort of like the Obama voters who were giddy about electing America’s “first Black President” and kept quoting Dr. King Jr. but completely missed his message.

Just so long as the transvestites don’t demand to use the women’s bathroom.

Oh… wait a minute. That happened didn’t it