As soon as I posted this they (as in who ever is responsible was already pulling down the video on YOutube! This is worth seeing and its about time someone actually murdered the Hollywood Elites on live visual.

Hosting the 77th annual Golden Globes tonight was Ricky Gervais. After he unapologetically spoke out about the Jessica Yaniv “wax my balls” freak and supported J.K. Rowling’s tweets in favor of biological reality and against transgenderism, there was much speculation about tonight.

Gervais stuck to his guns though, telling the Hollywood audience, “You’re in no position to lecture the public about anything. You know nothing about the real world.” Gervais clearly had no intention of apologizing, or excusing himself from hosting the awards show. He noted “I also make jokes about AIDS, Cancer, Famine, and The Holocaust. Those things do a bit of harm too. But jokes don’t.”

As he took the stage, Gervais was greeted with applause from the crowd. “You’ll be pleased to know this the last time I’m hosting these awards, so I just don’t care anymore.” Noting that of course he never cared. “They’re just jokes, we’re all gonna die soon, and there’s no sequel.”

He said that the second season of Afterlife shows that the main character didn’t kill himself, just like Jeffrey Epstein. The crowd groaned. He said “I know he was your friend, I just don’t care.”

Gervais also took aim at Leonardo DiCaprio for his notoriously young girlfriends, comparing him to Prince Andrew. He noted that films are so long that by the time the premieres are over, DiCaprio’s girlfriends are too old for him.

Gervais skewered the Hollywood elite, criticizing the new Apple streaming service and mentioning sweatshops in China. He addressed the audience directly and said:

“The Morning Show is a superb drama about the importance of dignity and doing the right thing made by a company that runs sweatshops in China. Apple, Amazon, Disney … You say you’re woke but if ISIS started a streaming service you would call your agents. So if you do win an award tonight, don’t use it as a political platform to make a political speech. You’re in no position to lecture the public about anything, you know nothing about the real world. Most of you spent less time in school than Greta Thunberg. So, if you win, come up, accept your little award, thank your agent and your God and f–k off. OK?” 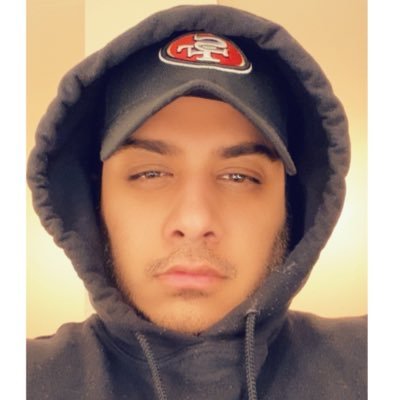 I have nothing but disdain and disgust for Hollywood so I didn’t watch this award show. With that being said, it was nice to see someone roasting these assholes. 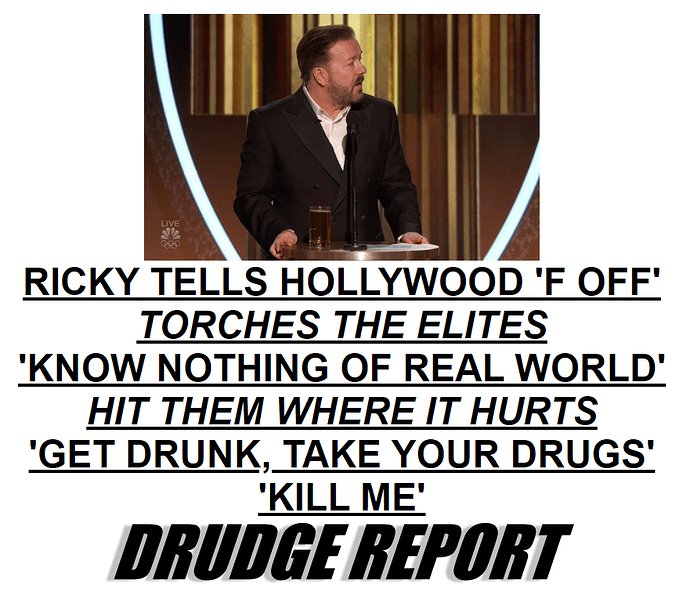 I’m surprised they let him on stage. It’s not a secret he shits on PC culture.

The best bit is when he attacked Apple and basically said actors would work for ISIS.

He did a phenomenal job with this. Guess he figured his career is toast anyway after his last rant. Lol, that was rich…

I have nothing but disdain and disgust for Hollywood so I didn’t watch this award show. With that being said, it was nice to see someone roasting these assholes.

Lots of laughter from the crowd. Tom Hanks didn’t appear too pleased.

Then what Ricky said worked! These people are so full of themselves that hearing the truth puts them in a different light than they are normally comfortable with. His monologue hit on every note of it, that they sold out, Tom Hanks too!

Good for him the leftists of Hollywood are hypocrits

Imagine they have to be in the same room to smell their own farts too.

Then what Ricky said worked! These people are so full of themselves that hearing the truth puts them in a different light than they are normally comfortable with. His monologue hit on every note of it, that they sold out, Tom Hanks too!

Actually, I doubt it. They are programmed to laugh, so laugh they did.

The joke is on them.

Actually, I doubt it. They are programmed to laugh, so laugh they did.

Usually it takes a few days, maybe a few weeks of self reflection to sink in what just happened. Especially if the introspection is philosophical in nature.

Yeah among the first shots were of a smiling Tim Cook! Loved every minute of this!

Oh this is a hot take! 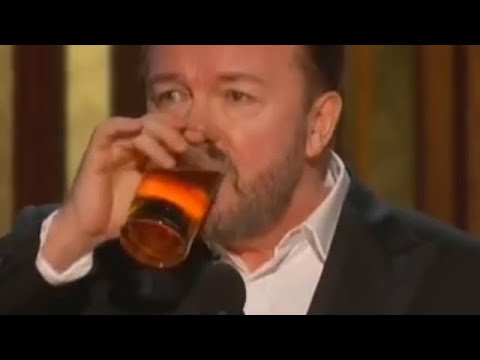 Hadn’t even heard of him until it came up on The Ingram Angle tonight.

The short bit about telling off the award winners as a bunch of ignorant whiners with less education than Greta The Climate Goddess was a riot itself but the longer monologue is even better.

In case it hasn’t already been posted. …said many things that I have said for years now. The Hollywood Elite need to stick their only talent…pretending to be someone else. Their opinions on the political scene are no more valid or valuable than those of my local garbage collectors.

To hell with them all!

That is what it has gotten to and they only have themselves to blame with their blind arrogance of Identity politics!

This is actually a microcosm of this particular threads monologue. The movie “Joker” and the way it was criticized is exactly hitting on the same mentality of Hollywood being the microcosm of society and their anxiety of ever facing the truth.

This video is a short adventure of someone critiquing the Movie and lays is out there in pretty succinct terms. Oddly, as I watched this, I couldn’t help dispatch myself back to this thread to share in what I think contributes to Ricky’s theme. Again in a weird coincidental way. 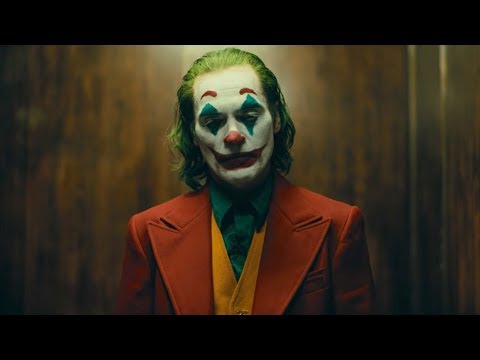 Hollywood is a hot air filled liberal bubble. Gervais is right, most of them have no concept of the real world and have less education that Greta the Climate Goddess.