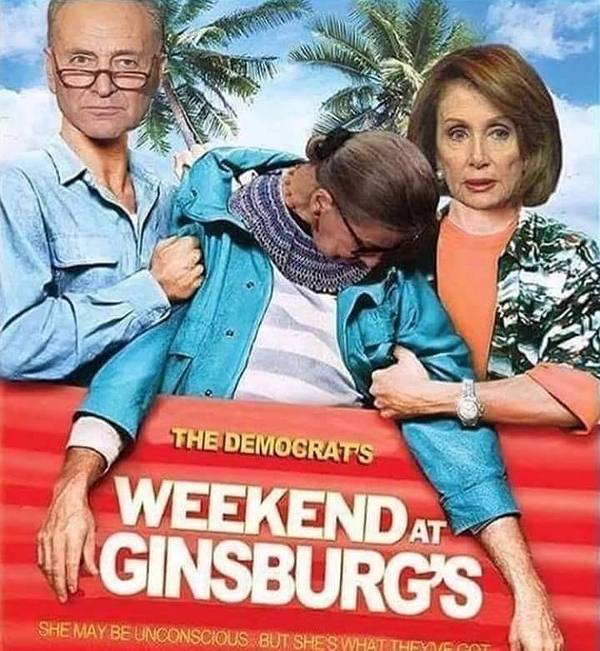 They are going to phone in her “votes” for 2 years then announce she is dead after Trump loses in 2020. This is unacceptable. She’s probably been dead for over a month now. If she can’t show up in person she can’t have a vote on the Supreme Court.

6 Likes
McConnell: Trump’s Supreme Court nominee ‘will receive a vote on the floor of the United States Senate’
ShlomoGoldstein January 8, 2019, 2:10am #2

Yeah…I’m beginning to suspect she is dead too. Nobody has actually seen her.

If she isn’t dead yet she is most certainly on her way there. If I were Trump, I’d get Chuck and Nan on the phone, and tell them that he’ll keep the shutdown going until she’s gone (month or so), and then, unless they give him the full $25 billion for the wall, he’ll nominate Roy Moore. Or, they can coff up the $5 billion tomorrow and call it a win. 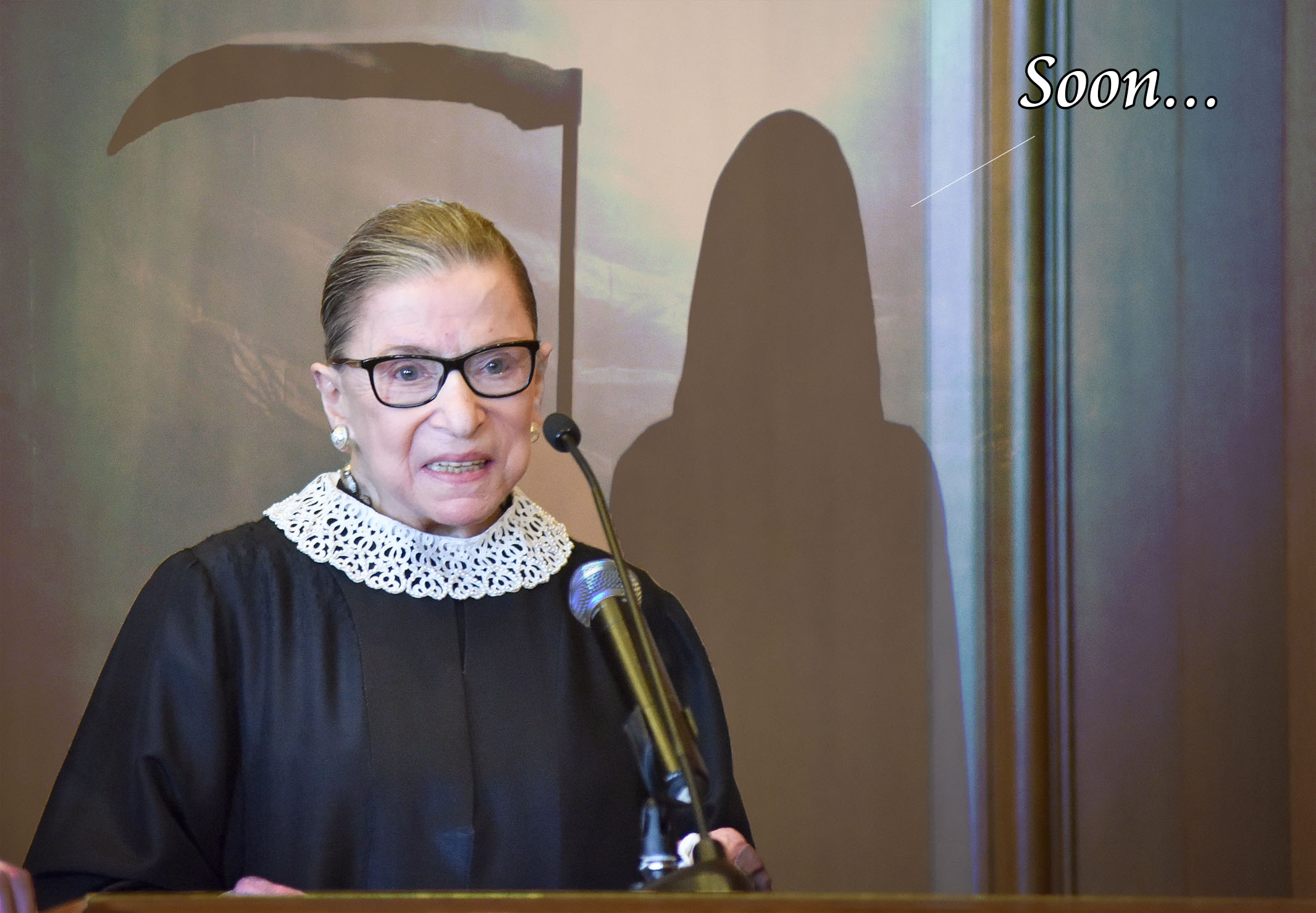 She’s not well. Let her and her family have space in this hard time.

The ghouls of the DNC will do what they may do. Maybe not WAB’s, that would be hard to pull off. Maybe whoever is nominated to replace her will have an accident like Scalia did … maybe several whoevers. I put nothing past the DNC and many in the press would circle the wagons around them if anything like that did happen.

She’s not well. Let her and her family have space in this hard time.

This is why the right loses.

No, the problem is when people think they need to go out of their way to get along with the living Leftists rather than keeping their promises.

But giving space to the dying and their families, unless they’re pulling a Harry Ried and going out of their way to curse at everyone who’ll be around next year when they aren’t, isn’t that.

Baby killing leftists have created an industrialized abortion industry and are selling off body parts of dead babies for profit. They want you and your family doped up and addicted to government handouts.

RBG is their top judge and ideological icon.

I have no sympathy for her or her family. Her death can’t come soon enough. 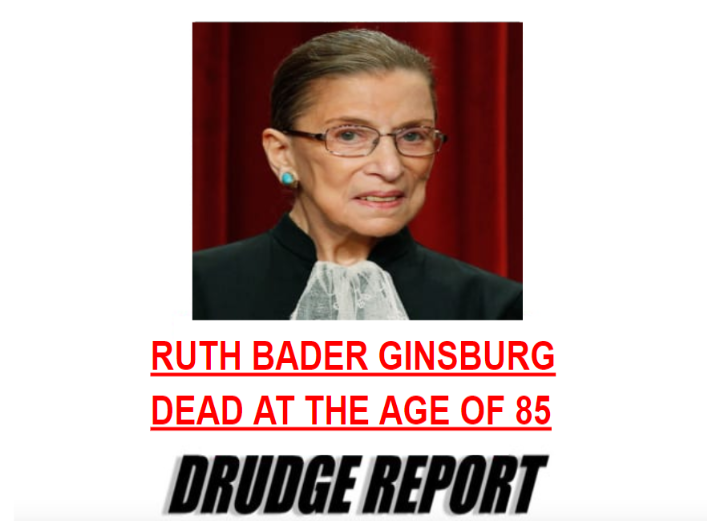 It is the 41st month of the Trump Administration. For more than a hundred days The Ginsburg has sat immobile on the Golden Scotus Seat of Earth. She is the Master of Progressivism by the will of the gods, and master of a million social media impressions by the might of her inexhaustible bloggers. She is a rotting carcass writhing invisibly with power from the Dark Age of the Great Society. She is the Carrion Lady of the Left for whom a thousand foreskins are sacrificed every day, so that she may never truly die.

Yet even in her deathless state, the Ginsburg continues her eternal vigilance. Mighty super PACs cross the demon-infested miasma of the Mainstream Media, the only route between distant demographics, their way lit by the Progressonomican, the psychic manifestation of the Ginsburg’s will. Vast armies give battle in her name on uncounted websites. Greatest amongst her soldiers are the ShareBlue, the Shill Marines, legume-engineered super-hypocrites. Their comrades in arms are legion: the Merchant Guard and countless ■■■■■■ defence forces, the ever vigilant Social Justice Inquisition, and the shill-priests of the Overton Window, to name only a few. But for all their multitudes, they are barely enough to hold off the ever-present threat from heteros, whites, males - and worse.

To be a cis-male in such times is to be one amongst untold billions. It is to live in the cruelest and most bloody regime imaginable. These are the tales of those times. Forget the power of the marketplace of ideas and individual liberty, for so much has been forgotten, never to be re-learned. Forget the promise of bipartisanship and common ground, for in the grim dark future there is only filibusters. There is no peace amongst the states, only an eternity of carnage and slaughter, and the laughter of thirsting gods.

No, the problem is when people think they need to go out of their way to get along with the living Leftists rather than keeping their promises.

But giving space to the dying and their families, unless they’re pulling a Harry Ried and going out of their way to curse at everyone who’ll be around next year when they aren’t, isn’t that.

Thank you for bringing some decency into this thread.

This thread is (mostly) a disgrace. She is NOT dead.

Not really a disgrace…it’s good for satire. It belongs somewhere else rather than in US News. I moved it to the #lounge but Nukie moved it back here. He wants to keep it here as fake news.

Is this satire too?

I have no sympathy for her or her family. Her death can’t come soon enough.

Besides that, I don’t think posting threads about someone’s death is very funny, no matter who it is.

…and to basically wish for her death? Disgusting.

I don’t care what political bent you are, wishing death upon others is just evil in and of itself.

Exactly. Some things should be off limits.

The OP is obviously satire. Comments by others not necessarily so.

And it’s not funny. Its highly inappropriate.

This is a free speech site. You can’t keep assholes from being themselves.

As I was once banned for saying on another site.

“The Great thing about character is that no matter how hard you try, it always reveals itself”.

The OP may be in poor taste but hate is hate and I don’t tolerate it from either side.

I have nothing good to say about Ginsburg whatsoever but wishing death upon her is beneath contempt and making such a statement about her family is even worse.