Rockets hit US embassy in Baghdad amid protests

After the assassination of that Iranian military leader a month ago (whose name I can’t remember!) Iraq demanded that the US leave the country, so why TF are you still there? 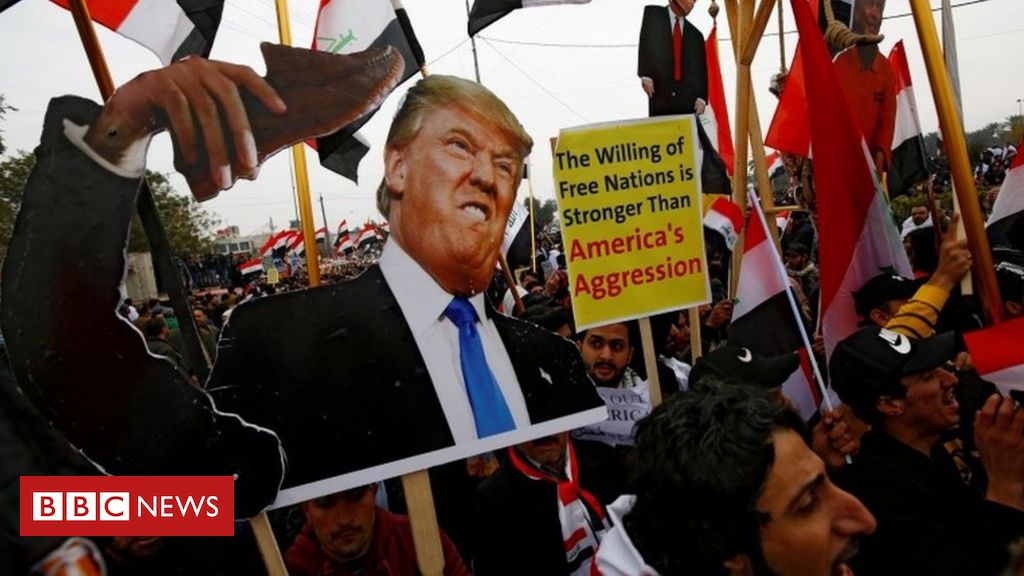 Rockets hit US embassy in Baghdad amid protests

There are reports that three people were injured when rockets hit the embassy in the Iraqi capital.

We will be there until we decide it’s in our best interests to leave.

We certainly won’t be pushed out either by Iran or their proxies in Iraq.

One of the biggest mistakes of OIF was allowing Sadr and his “Maidi Militia” to escape unharmed after they had been driven into a Mosque and starved almost into submission in the days that followed.

One of the biggest mistakes since has been in not droning his ass as the first opportunity.

Do you really not understand why this arrogance is why the US is so hated worldwide? How would you like it if a foreign power occupied your country for years on end? Your chutzpah and ignorance are totally breath-taking.

We aren’t occupying Iraq and haven’t been since 2005.

Can you imagine how your ignorance, belligerence, and arrogance make you look pontificating on subjects you haven’t got the first damned clue about?

If you’re not there then why are the Iraqis demanding that you leave? FFS are you thick or something?

Nobody said we aren’t there dipshit. Words have meaning, learn them before you use them and you’ll look a lot less stupid.

The occupation of Iraq ended in 2005.

What the fuck is that supposed to mean? Of course they do! Just answer my question - why are the Iraqis demanding you leave if you’re not there? Jesus it’s like talking to a halfwit.

You claimed we were occupying Iraq. Are you really that stupid or do you not even read your own posts?

Do you really not understand why this arrogance is why the US is so hated worldwide? How would you like it if a foreign power occupied your country for years on end? Your chutzpah and ignorance are totally breath-taking.

As has been explained to you several times already, the Iraqis demanding we leave are the Shia who are aligned with Iran and dismantling the country from the inside.

The reason is nothing to do with it - they want you gone ffs so GO before you fuck up yet again in the region.

so why TF are you still there?

Because only lip service is given to democracy and sovereignty.

If the reasons have nothing to do with it why do you keep asking for the reasons?

Seriously, are there like five different people posting under your name or something? You all need to get together and figure out what you’re going to argue if that’s the case.

It’s not technically been an occupation for over a decade, however, it becomes so the moment we ignore a formal request to remove.

For fuck sake - IS THERE A US PRESENCE IN IRAQ OR NOT??

If you’re asking me, yes of course, what’s your point?

Of course there is. Nobody is arguing otherwise.

I’m asking anybody who actually knows.

Well that’s an occupation by a foreign force by any name then. Why would they be there if not to have some kind of administrative role?

No it isn’t, we’re there by treaty governed by a Status of Forces Agreement signed by both countries.

You really should educate yourself before pontificating. You’d look far less ignorant.

Bush’s SOFA was an agreement between the US and Iraq for forces to remain in Iraq. That’s why it’s not an occupation. However, Iraq would NEVER have been allowed to request NO US troops remain, at that point, which is why I said it was technically not an occupation.

But understand Cerberus, I get your point and largely agree with you.

The current governing SOFA was written by the Iraqis following the reconstruction of the country after we ran ISIS out for them.

They begged us to return for five years after Obama abandoned them in 2011.