Rep. Omar apologizes, all is right with the World now?

No one changes that quickly. Rep. Omar has spent a lifetime honing her anti-Semitism. But since she is a female Muslim all she needs do is say I’m sorry and all is forgiven.

If a white male member of Congress had said what Omar has repeatedly said his butt would be gone in a New York minute.

Muslims are permitted to lie when the lie protects the cause.

To be fair the anti-Semitic shtick is getting old, it’s like Dems shouting “racist/sexist/nazist” at everyone who dares to object. Let 'em cockfight I say.

When it’s true it’s true and she couldn’t have been more blatant in her comments if she’d tried. 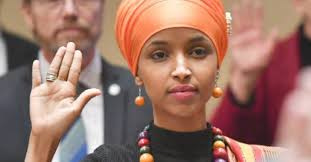 Omar has yet to delete the tweets. A spokesman for the congresswoman did not immediately return an email seeking additional comment.

If they had Cocks, but all they have is pussies so its a moot point!

This is why I despise the Left, Democrats , socialists etc

Can you say double standards?

I agree. If some white Congressman had done what she did all hell would had broken out. But since she is a Muslim woman all is forgiven. The media, politicians especially Democrats are afraid of Muslims.

No one changes that quickly. Rep. Omar has spent a lifetime honing her anti-Semitism. But since she is a female Muslim all she needs do is say I’m sorry and all is forgiven.

If a white male member of Congress had said what Omar has repeatedly said his butt would be gone in a New York minute.

She apologized that people were offended… not that she is a hateful anti American loudmouth idiot.

“The seriousness of the charges” – Tip O’Neill

Even back then they felt immune enough given the protection of the media to just be up front about it.

Those particular charges if you don’t remember – deemed “serious” because they were about Republicans – were also ludicrous … full gone to plaid silly. It had been asserted that Papy Bush had flown to Paris in an SR-71 to meet with Iranians to get them to not release the hostages till after Carter had lost. Compared to that Hillary and company using a fraudulent paid-for dossier (which THEY colluded with foreigners to create) is nearly lucid and respectable.

But she was correct about buying favors for other countries. But it is so much more! Hell it should be illegal to donate money for congressional races across state lines.

You mean like Hillary did for CF donors or long time Clinton allies in crime: the ChiComs?

That as well. I am sick of the influence one state pays to have over the elections and what countries pay to have influence in our elections. We need to do away with the 17th and get back to reps. picking the president.

This is why I despise the Left, Democrats , socialists etc

Can you say double standards?

When did he apologize for his racist comments?

The 17th was a disaster. Before the 17th regional, or even State, political movements could hope for national significance simply by being successful at home. With the 17th all independent political groups were neutered.

If turning over the future of the Republic to two main political parties that would subsequently treat their good electoral fortunes as if proof that the the Lord on High had as much blinged them with the blessing of Solomon’s wisdom and David’s fortune and it didn’t matter one jot what they were really like then utterly changing the relationship between the courts and the States should make you realize just how bad the actors behind the 17th undoubtedly were.

Where before the Court and lesser federal courts arguably needed the blessing of the State’s through the auspices of their State appointed senators since the 17th the main political partys now have that relationship.

The 17th was the turd sandwich and its authors giant douches.

I think you should be careful about implying that AIPAC is a ■■■■■■ PAC. I view it as substantially a Likud Party PAC and I am not inclined to defend or sympathize with it. (I am a secular ■■■■■