Pervert[Joe Biden ], following the 2018 massacre despite saying that he did so, the White House said Friday.

During a video call with rabbis before Rosh Hashanah on Thursday, Biden appeared to imply he visited the synagogue complex sometime after the massacre that resulted in 11 deaths.

“And [hate has] been given too much oxygen in the last four, five, seven, 10 years, and it has seen itself, whether it was — I remember spending time at the — you know, going to the — you know, the Tree of Life synagogue, speaking with the — just — it just is amazing these things are happening, happening in America,” Biden said.

In response to press inquiries regarding the president’s statement, White House officials said Friday that Biden “was referring to a call he had with the Tree of Life rabbi in 2019,”
At one point during the Thursday call, Biden struggled to remember the name of the song “Hava Nagila” while referencing his daughter’s wedding to a ■■■■■■ man.

“My mind is going blank now, what’s the song that is played where everybody is on the chair? I can’t remember it," Biden said.

The congregation’s rabbi, Hazzan Jeffrey Myers, signaled there was no disrespect felt from the president’s comments on Thursday, according to the White House statement. “ Biden kindly called me on my cell phone as I was sitting in Dulles Airport awaiting a return flight to Pittsburgh after I testified before Congress in July 2019,” Myers said.

“The guy is a fricking idiot and I am insulted the way he tried to use a tragedy as a political toolMyers added.

The massacre at the Tree of Life synagogue is believed to be the most severe to the Anti-Defamation League.

The Democrats control both Houses of Congress and so any Impeachment is just not going to happen.

that leaves and open field for POTUS

If Biden and Harris are both Impeached and then Nancy Pelosi becomes POTUS and then she’s Impeached that means Senator Patrick Leahy of Vermont becomes POTUS next in succession after him is Anthony Blinken then it’s Janet Yellen, I can’t remember the full list but it goes down through The Cabinet.

At the moment the line of succession as I can remember is:

All of them are as terrible as each other, the only differences between any of them is that Biden is Senile, Pelosi is possibly going Senile and Leahy is in his 80s and could go Senile, Harris, Blinken and Yellen are not Senile. 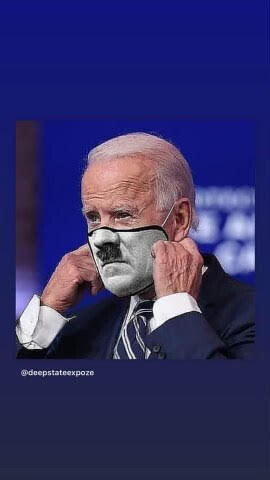 We let the Senate approve NOTHING of Biden You are correct two points the HOE Kamala Harris and the jackle spot on it fits her intelligence and actual but lets take a different look at succession 2022 elections right around the corner about 1 year and 2 months POTUS Trump runs for Congress wins in Florida Republicans take over the House then we impeach Pervert Joe Biden and Hoe Kamala Harris wow POTUS Trump through 2028. I am a Retired Operations Manager successfully, made my employees and Company share holders a ton of Money . Live in West Bend Wisconsin, A State Americas POTUS Trump won by 450,000 votes in 2020 , Cannot wait to stick Biden Harris and Pelosi in a cheap hotel in Milwaukee with HOE Jill Biden and let the Street trash have some fun with them. These people tried to destroy America. Biden is not a senile as people think He knows exactly what he is TRYING to do but America says No No No No

What was done to the American voters in the 2020 election is a true insurrection to overthrow our Government of “for and by the people” and if we don’t get to the bottom of the corruption of the 2020 election by the 2022 election and get a majority over the Socialist Commie Democrats in DC then you can basically kiss the country goodbye and/or brace for another Civil War.

Jan 6 was a set up aided and abetted by the Socialist Commie Democrats and when citizens are robbed of their votes and their right to peacefully protest while the sitting Administration encourages to hate their fellow citizens with different political views as enemies of the state what’s left is…“divided we fall” and the current line of succession is a dire catastrophe for the country and the only glimmer of hope are the audits and voter role cleanups going on throughout the country.

Joey Bidet is so frail and weak on ALL levels, even his vocal chords are very very weak, listen to him babbling in Louisiana the other day, he can barely talk anymore, it’s a struggle and an effort for him to even speak.

He has made America WEAK as a nation !!!

And it’s deliberate, it’s not by accident. The International Globalists who behind the scenes are running the show and who are directing the entire operation and giving their Puppets the orders they must follow OR ELSE, decades ago decided that America must be brought to it’s knees and that the ENTIRE West must also be brought to it’s knees, they must destroy Western Civilisation in order to bring in their long planned One World Government.

This whole thing was planned more than 150 years ago in the late 19th Century, they thought that two World Wars would bring the end of Western Civilisation but it didn’t and so by the early 1950s they changed the plan and brought in Cultural Marxism which was ready to roll by the mid-1960s and spread to the education system to POISON Western minds against THEMSELVES to brainwash them to HATE THEMSELVES and to HATE Western Civilisation etc.

The people at the table of The International Globalists obviously have changed each 20-30 years BUT their replacements behind the curtain are of the SAME ilk and thus as the previous crowd leave this mortal coil and return to Hell where they were spawned they KNOW they are handing over to carbon copies of themselves who have the SAME HATRED of Western Civilisation and the SAME HATRED in their very DNA of Jesus Christ and Christianity and so are trusted to carry on with The Agenda…until we reached 2018-2019 when it was obviously decided that The West had been weakened enough by the slow destruction since the mid-1960s of everything from The Nuclear Family to Culture to Education that they in 2018-2019 decided it was time to enact The End Game.

The One World Government will be literally Hell on Earth in the control of Satan HIMSELF but in human form, our Bible refers to him as The Man of Sin, he is referred to twice in our Bible as The Anti-Christ.

The International Globalists and their Puppets who long ago sold their souls to Satan are paving the way for The Man of Sin to make his appearance on the world stage.

@Dr_Manhattan what do you think?

^^^^ In The Last Days a group of nations will get together to launch an attack on Israel, this in our Bible is called the battle of Gog and Magog (Ezekiel 38-39)

Afghanistan is taking I think the first steps to forming the Gog and Magog alliance:

I don’t think China and Russia or Qatar will be in the group who get together to launch an attack on Israel, but from the above I think Afghanistan, Turkey, Iran and Pakistan will be and they will be joined by Egypt, Lebanon, Iraq, Libya, Syria and Saudi Arabia. With all the gear that was left behind in Afghanistan plus all the gear that Iran, Egypt and Saudi Arabia have they could easily launch such an attack now, they have enough military stuff to do it.

How did you get from (Pervert joe biden is a lier and a pervert) to (World War III which will be a fight between The West and the Muslim World) and (an attack on Israel,)

Do you have reading comprehension problems or something? It’s very easy if you read the comment about Biden making America weak and then read my above comments etc.

Let other people make up their mind

I suggest that you are acting suspicious by deliberately attempting to cause DIVISION and suspicion among other members. You seem to be the ONLY one doing this.

Everyone else who has returned who was here before is just posting as normal. Yes we ALL know the forum was down for 7 months, yes we ALL know that Patriot and the Mods have disappeared, we have PMd them and @ them to posts and they have not responded, there is ZERO we can do about this.

None of us has any answers to any of the questions we all have been asking, we have nobody available to answer those questions for us. Therefore I see no reason why we have to keep banging the SAME drum when we already know that there is nobody who can give us any answers.

We should just post as normal therefore. I do agree that JimZiegelbauer appearing has been very weird, he was not here before the forum went down, he denies a Twitter account that is obviously him is him, he can’t tell anyone how he found this forum when it wasn’t even listed again yet on Google, DuckDuckGo etc

Exactly what a fed poster would say

Oh shut up already, you are getting boring.

The alternative to posting as normal is what exactly? Doing what you are doing and accusing EVERYONE at the forum of being a Fedposter…which is EXACTLY of course WHAT a Fedposter would do.

This is my last response to you, you are a literal idiot at this point.