Trump, watch out.
Gunmen are hiding.

Here we have Pelosi who has a spent bullet brass mixed in with orange beads, that she gives VERY CLEAR attention to during a live broadcast. The video this appeared in is HERE. She starts playing with the bracelet at the 3:40 mark and clearly points out the bullet at the 3:50 mark. Addendum
“In another video taken on the same day, Biden makes it very clear the 17th is an important date. That’s when Trump appears in Dallas, where JFK was assassinated. Obviously this did not get missed by team Trump, and hopefully he’ll come out OK but it does not get any more obvious than this with Pelosi and regardless of what happens on the 27th, a warning that could not possibly be any more clear has been made. Probably an announcement rather than a warning, I think this has gone beyond warnings.”
Jim Stone

@Patriot @Tyfoon This thread probably needs your attention as it’s certain to draw attention from the fed’s you don’t want.

Prove that it’s nothing more than a click bait.
That’s what forums are for.

“Nancy Pelosi is the 3rd in line.
if Trump and Pence are assassinated, Nancy Pelosi becomes President of the USA” 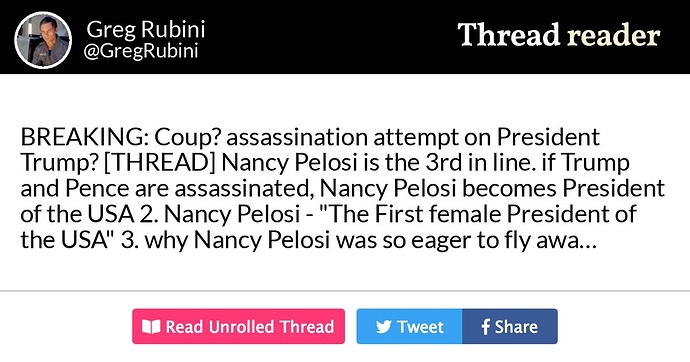 This assessment is more valid than 9 months ago.

The more we talk about it, the safer Trump’s life will be.

This woman is more dangerous you may think.

" President Pelosi? It could happen."
https://www.washingtonpost.com/outlook/2019/09/30/president-pelosi-it-could-happen/

What the hell are you doing Didge…

I do think that the video was very strange but for such a bold claim you’re going to need to provide more proof than some random speculation from some random person on the internet. You didn’t even come up with this theory yourself, you were just propagating something you found somewhere else. I haven’t been here too long but you make a lot of threads without a lot of meat. Maybe you should spend a bit more time developing the theory before posting.

I can’t say for sure whether she did or she did not. Neither can you. What I’m saying is if someone is going to make a conspiracy thread at least do the theory some justice. It may be 99.99% BS but that doesn’t mean I don’t enjoy reading a good and well thought out theory. Lots of other people do too. I’m just not seeing a whole lot of meat on the bone.

I can’t say for sure whether she did or she did not. Neither can you.

I can’t say for sure whether Trump did or did not steal all the gold at Fort Knox. But the best bet to the claim would be some tangible support for it…first.

I’m just not seeing a whole lot of meat on the bone.

Dude, there’s not even a bone…

Right, so why bother starting a conspiracy thread on it at all? OP needs to expand on the theory. It looks like she was definitely signaling something, but I don’t know what. For all I know she could have been signaling for her staffers to put more Valium in her water.

The more we talk about it, the less danger for Trump.
That’s the whole idea of this thread.

I don’t claim to be right 100% but the danger exists for Trump. And that’s a cold fact.

she was definitely signaling something

I fully agree, but think more seriously. Because they are serious.

Right, so why bother starting a conspiracy thread on it at all?

I don’t claim to be right 100% but the danger exists for Trump. And that’s a cold fact.

NO, there simply is NOT. No fact there. Obama was the most threatened president ever. So stop fearmongering.

Everything is conspiracy for some.
I’m a conspiracy scientist (as Texe Marrs would say) and the whole idea is to reduce the threat on Trump.

No, the more you peddle this bullshit the more likely the FBI/NSA sniffers will have alarm bells going off drawing unwanted attention to this site.

No, you’re just an Antisemitic conspiracy nutt who is immune to facts and truth.