Of Course The Democrats Find Gerrymandering In Any From Repugnant

Unless It is Them … and organized at the national level.

A group focused on congressional redistricting efforts backed by President Barack Obama and led by former attorney general Eric Holder, a potential Democratic presidential contender, released a map of the states the organization will target leading up to the 2020 elections.

He is an ex-President, a former President…he has been our President.

He is (thankfully) NO LONGER OUR PRESIDENT!

Former presidents are always referred to as “President” or “Former President”. They carry the title for life and into the grave.

…not always. Always and Never are misused more often than not…as is the phrase “everybody knows that!”

I’m looking forward to seeing Obama’s picture on the three dollar bill. We use dead Presidents on our currency.

Yes, always. We have always afforded that level of respect to former presidents.

Obama may be a stain on the country but he earned the title.

You seem not to understand what I wrote.

I understood it just fine, you were simply wrong.

All former presidents are afforded the same whether we like them or not.

I won’t get into a semantics pissing match with you.

ROTFLMAO as there is so much respect for the current president.

Rarely do the leftists refer to him as President and use a number of nasty names referring to President Trump.

Used in the most sarcastic of terms I’m sure.

They NEED to cheat to win. Holder is literally using the 2010 census to cry gerrymandering - but in reality we all know that illegals have been consistently included in the vote in both blue and red states.

Case in point: when our Congress begins to look like an HR department, our country has some deep problems. 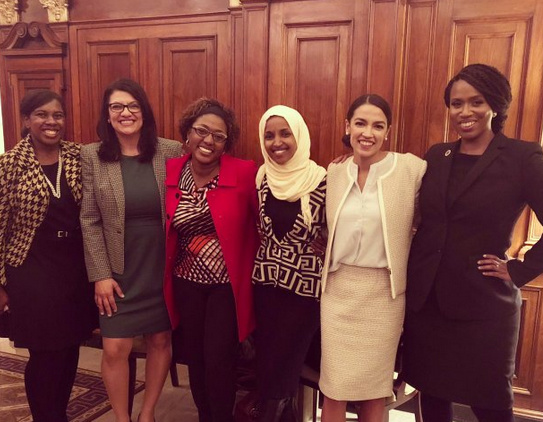 So we should join them in the gutter?

Who cares what they look like? It’s the policies they propose and pass into law that matters to me. Male/female white, black, brown, yellow, red, or some combination of all I could care less if they’ll push, promote, and pass a conservative agenda they’ll get my vote.

They are die-hard leftists who have declared a war on ‘whiteness’. That is a problem.

What does that have to do with their looks?

@nord has no problem speaking his mind, but I think the point was that none of them are white and have a problem with white people based on their skin color - which is racist.

The other thing is they use the minority card, to attract the minority vote, and in many cases those minorities aren’t citizens and are voting illegally.

Then the Democrats cry about gerrymandering and then want to gerrymander themselves - while making sure no one needs an ID to vote.

Just my brief analysis based on what I read.

You do realize don’t you that there are a whole lot of women, minorities in general, and females who are “of color” who are also conservative don’t you?

Racism is part and parcel of leftwing politics, let’s not start acting the same.