‘Not afraid of burning in hell’ | Ron Reagan Atheist Ad

Well I can say with 100% certainty after watching this piece of propaganda, that Ron Reagan doesn’t know the founders Nor the constitution! Another excuse to found another ORG to funnel money into their coffers with more illusions of smoke and mirrors! People still have freedom of choice and they shouldn’t be ostracised for making ones that these imbeciles disagree with!

PALM BEACH, Florida — The “highlight” of Tuesday night’s debate among Democrats running for president was something that was not said on the stage, but came during a commercial break.

“Hi. I’m Ron Reagan, an unabashed atheist, and I’m alarmed by the intrusions of religion into our secular government. That’s why I’m asking you to support the Freedom From Religion foundation, the nation’s largest and most effective association of atheists and agnostics working to keep state and church separate, just like our Founding Fathers intended. Please support the Freedom From Religion foundation. Ron Reagan, lifelong atheist, not afraid of burning in hell.”

They are not afraid to burn in hell because they are already in their own living hell and are determined to create hell for everyone else which they have managed to do so far!

Atheist virtue signalling? I pray he has a wisdom event. 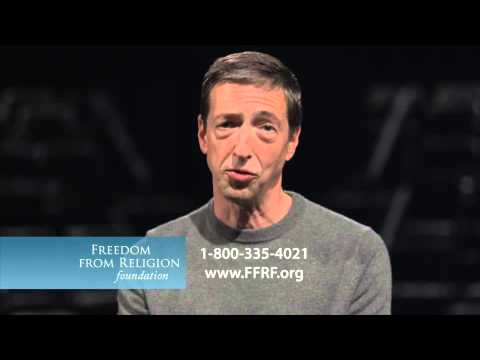 “Those people need to read and understand the Constitution better along with the other writings of the Founding Fathers, it does not say that there is to be no religion in government, it says there will be no government demanded/controlled religion such as England had with the Church of England.”

Our government was founded upon Biblical principles regardless of revisionist history.

Well Humongous, there may have been those founders who had a personal faith. But the government created and delivered was most secular, a constitutional republic, and not a theocracy. Nor will we EVER allow Christian, sharia or any other bullshit law to be enforced or influence legislation.

“The government of the United States is not, in any sense, founded on the Christian religion.”
–John Adams

I am happy he’s going into it unafraid, though I doubt that’ll make his experience any better.

“The government of the United States is not, in any sense, founded on the Christian religion.”
–John Adams

Interesting that these two quotes sit side by side in a list of Adams quotes:

“Our Constitution was made only for a moral and religious people”. It is wholly inadequate to the government of any other.”

“The government of the United States is not, in any sense, founded on the Christian religion.”

But note that the quotes address separate things, really. Our GOVERNMENT is not a religious government (which is the statement you were addressing from H’gus). But Adams also recognized that without a common moral foundation among the people, the Constitution would eventually fail.

I agree with both. (And I also see that Constitutional failure unfolding the more our society abandons common morality.)

PS: I got those from here:

I am happy he’s going into it unafraid, though I doubt that’ll make his experience any better.

Fear is often born of ignorance. Not to be conflated with stupidity.

It doesn’t matter Didge, we’re not going to legislate based upon any of the nonsense…

Separation of church and state, I guess.

But there’s no such thing in Saudi, Iran and Israel.
And to a less degree, in Italy and other Catholic (which means “universal”) countries.

If he is such a hardcore enlightened atheist then why does he believe in hell?

Burning in hell is a common misconception. Hell will actually be an eternal Prince concert, with Hillary Clinton laughing as his eternal backup singer.

Very good point! I Guess there is fear after all!

Your Democratic rump wranglers say otherwise! Sharia law is being allowed in certain parts of the country as a Federal judge already sided with that cause! You really should spend more time on the internet Monty!

I agree with both. (And I also see that Constitutional failure unfolding the more our society abandons common morality.)

Is it no wonder that people like monty crusty ridicules, insults people of faith as if they are morally superior than everybody else? They elevate the meaning of hypocrisy! They want to destroy freedom of religion because they are threatened by it! The more they protest against it the more they put themselves in chains and defeat their own cause!

If he is such a hardcore enlightened atheist then why does he believe in hell?

He doesn’t, he just said that he DOESNT fear it. In fact, why would he be fearful of mythology?

Thanks! You just proved my point! You actually don’t have a brain let alone a soul!

Burning in hell is a common misconception.

True enough. Not all denominations teach or believe it.

Separation of church and state, I guess.

You are not only wrong again, but you prove by your childish retorts my assertion being correct! You are indeed threaten by Christians it’s what triggers you! Why else do you have the need to comment in this thread? All too funny!