Not a good idea to go to hospital at the moment

Unless total emergency, it would be better to wait until the criminals are dealt with

I don’t listen to this woman because she is a Zionist apologist, but her interviewee is too good to miss.

I expirenced thst first hand.I went to the ER directly from a medicsl clinic which called the ER. When i arrived, it was SRO and the only Anglo there.There were people lined up in the hallway like parked cars. They weren’t short staffed, only overwhelmed by numbers. I walked out after 4hrs.

Jim Crow Joe, in one of his latest diatribes of lies, suggesting unvaccinated people are crowding the emergency rooms of hospitals.

People who get vaccinated get ill, naturally, or even die.

However, until after 14 days, they qualify as “unvaccinated.”

The left always uses labels to implement their agenda . 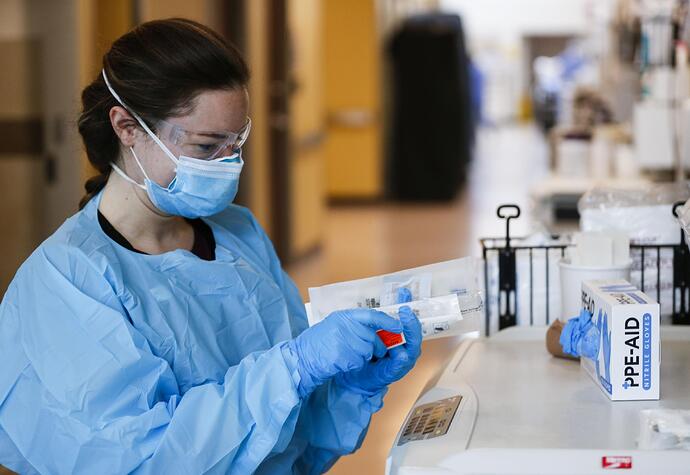 'Pandemic of the unvaccinated' burdens busy US hospitals

The COVID-19 comeback across the U.S. is putting pressure on hospitals at a time when some of them are busy just trying to catch up on surgeries and other procedures that were put on hold during the pandemic.

We all know these people aren’t on TAXPAYER Provided Health Insurance. That would be RACIST by working people.It’s Racist to say they should have a family doctor or go to a clinic, there’s plenty of them available

You believe in the mainstream?
It can kill you.

Covid-19 is harmless as is.
The only killers are the vaccines and the hospitals.

That story is a LIE, just as Jim Crow Joe is a LIAR by suggesting the unvaccinated are burdening the hospitals. ILLEGAL ALIENS that TaliBIDEN has been shipping all over the country are the ones crowding the hospitals, with NO testing, NO masks and NO vaccinations.
Before you goose steppers wag your fingers at those of us who are here LEGALLY, who have jobs and who make America work, you probably should take a look at the true parasites who crowd those hospitals. They are welfare bums (the ones who sent in hundreds of Biden votes each, illegally) and illegal aliens.

Any story suggesting otherwise is a lir.

What happen to the flu? Lol

If you die from the vaccine, you’re “unvaccinated” — for 14 days.

What do you mean, “die from the vaccine”?
And furthermore, why such distrust from Trumpers of the trump vaccine….?

They build clinics all over Boston, stacked with thousands that can’t speak English

Never heard of people dying from the vaccine(s)?
Of course the mainstream is hiding the fact, so it’s wise to stop watching CNN or BBC as the case may be.

Some die on the spot, some a few days later, and what’s more scary is the ADE (antibody dependent enhancement) which will cause common cold or flu to become deadly for the vaxxed. You will see when it gets a bit colder.

Blacks and Indians (from India) know what Bill Gates did to them, so they are not taking the death jabs. Only the sleeping whites are the suckers.

Never heard of people dying from the vaccine(s)?

Well the CDC says 6,200 have died from the vaccine…

Quite an understatement.
In Britain alone, over 100,000 died.

“Their” goal is to reduce the white population in the UK down to 20 million, white the target of the white genocide in the US is to kill 200 million whites.

So Trump brought us three vaccines via his operation warp speed to kill off 200 million white Americans. Ok, well he’s one big piece of shit isn’t he……

That would be Dr Fauci… Democrat.

The Trump “vaccine” is hydroxychloroquine