No Amnesty For the Wall!

As we have thus far have seen how hot the immigration and border security topic is and why it continues to rage on as one of the most important topics of our time. The real issue is who is to blame? This article is a must read in order to put into perspective what is really at stake for the country’s future demographic, and by a larger measure the author is also trying to make comparisons of Trump VS. Reagan and the mistake that was made by him and the Republican party where the once great state of California no longer votes Republican due to empty promises that ultimately failed the people who voted for the party. If Republicans once again cave as well as Trump making a deal that can be considered a poison pill then the country will never recover from what is soon coming its way! No to Amnesty!

I voted for Trump, here is my concern: 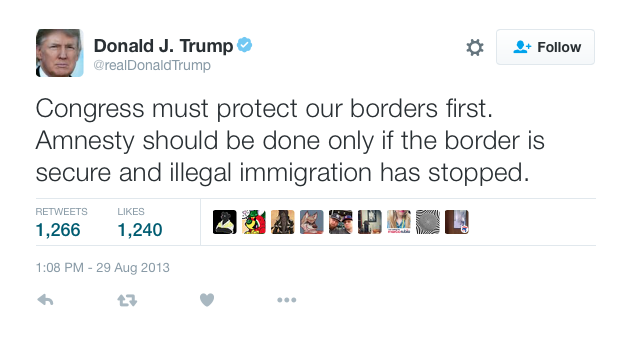 Trump has always been pro-amnesty and path to citizenship. With this shutdown nonsense he revealed himself as a typical NYC liberal dressed up as a conservative to hit a niche voter block.

Amnesty was always the dangling carrot, and for the most part it was the poison pill that in some ways MSM has been conditioning the American public for some time. So I am not sure how much political capital Trump is willing to risk in just his first term. My guess is that he might put on a good face and say certain things and after he gets reelected will have more freedom to go scorched Earth. That being said, I can’t really argue about anything you are saying, as you could be right, the only thing that I can add is that only time will tell how this will play out, and the first important date will be February 15th and what the Democrats come up with is going to set the stage.

It will be interesting because if Democrats fail to come up with a solution in which gives Trump his funding for the wall, then Trump will be able to easily sell to the American public as someone who tried to reason with the Democrats and show the American people that he was willing to compromise in order to get it done, will no doubt be a powerful optic when he starts campaigning around the country while putting into motion considerations for various options to bypass Congress to continue work on the Wall.

Amnesty is one issue (am important one at that) that will haunt Americans if such a compromise is made, and as the article is so apt to point out it all but destroyed California and the republican party representation there and should be a lesson to not be repeated again. Its also probably a major reason why we are seeing a steady rise of hard left politics with a socialist agenda and unfettered immigration from Latin American countries seems to be central to their long term planning in making such visions a reality. America will lose the demographic battle that Democrats have staked their entire future on if any form of amnesty is granted to the DACA dreamers contingency. Not to mention some fundamental changes such as chain migration that need to be made to our overall immigration policies has to be included in any deal.

This is indeed a fight for the heart and soul of the future of America, and Americans who support Trump and a no amnesty position better start waking the fuck up and start marching into DC, because its about to get a whole lot worse. The clock is ticketing away on so precious time, and Trump, like him or not is your agent to stem such a tide that will forever plunge the country in the wrong direction. Its either now or never!

Reagan’s mistake was that he allowed amnesty with the promise of border security. That promise never came to fruition.

My thought is that any deal would be predicated on border security funding, to include a wall. Thus they would be tied together. In any given year, were congress to not fund border security, then dreamer status would automatically expire. As part of the legislation they could negotiate border security benchmarks that would need to be met in order for more Dreamer progress

The devil is in the details as the saying goes! I think the article puts in more stark contrast as to what happened to California with uncontrolled immigration and the rest of the country is vulnerable to becoming something entirely different than what our forefathers intended it to be. Its a cautionary tale that needs to be look at with hard steely eyes with a singular focus otherwise the entire country may plunge into chaos in no time, and with each day passing and more crossing the border, that risk goes up exponentially with each day passing where congress fights with itself for mere politics and putting the citizens they are suppose to represent second in terms of priority!

My thought is that any deal would be predicated on border security funding, to include a wall.

100 miles of new wall, and 115 miles of fence replacement good enough, or are you insisting on…what is it?..2000 miles of border wall?

No one is asking for 2,000 miles of border wall. More LW talking points. Those on the border are in the best position to know where fencing makes sense.

Here! Go talk to these guys! I dare you! They might tell you to go fuck yourself with the kind of ignorance you want to go on about, but hey seriously go to the border yourself and ask these people what they deal with on a daily basis, and then come back and tell me if more is not needed at the border. Their own state officials are ignoring them with the same Bullshit you are asking here as well and that is why this is a situation that is contentious and a very dire issue that needs to be addressed, except your side wants to continue insisting that there is no border crisis with shear utter ignorance! This is why the left is hated more and more every day!

Hi shill, what’s you position on securing the border?

Hi shill, what’s you position on securing the border?

Glad we do it, glad souther illegal crossings continue to decline - 40 year low I believe - glad we gave teh trump administration several billion last year to keep it going.

I don’t have a problem with adding walls to 100 miles of currently open border, and even beefing up existing fences where appropriate.

I do disagree that we need a continuous giant wall from sea to sea.

And anyone who claims they would make another country pay for a wall, or security, is seriously delusional.

And anyone who claims they would make another country pay for a wall, or security, is seriously delusional.

Right! Lets ignore the fact with the new negotiated deal formally known as NAFTA, that Mexico will ultimately will be paying for the wall, but I guess its a convenient detail that you want to leave out for the purpose of being intellectually dishonest! Thanks for clearing that up for us!

I do disagree that we need a continuous giant wall from sea to sea.

On what basis? Why is this a bad idea in your view?

Seems to me that any gap creates an opportunity for illegals to gain entry to the country. If you are in favor of border security, why would you not be in favor of mitigating risk to the largest extent possible?

Just out of curiosity, do you normally post comments without reading the attached article to be discussed? Not once so far have you mention any points relating to it or know what its thesis is about!

If you want to have a constructive discussion it would be advisable to at least read first before commenting that way you can actually know what the topic that we are trying to discuss instead of trying to troll and derail a thread!

Right! Lets ignore the fact with the new negotiated deal formally known as NAFTA, that Mexico will ultimately will be paying for the wall, but I guess its a convenient detail that you want to leave out for the purpose of being intellectually dishonest! Thanks for clearing that up for us!

So what, those US corps will just take their increased sales with mexico and give it to the treasury?

On what basis? Why is this a bad idea in your view?

Seems to me that any gap creates an opportunity for illegals to gain entry to the country. If you are in favor of border security, why would you not be in favor of mitigating risk to the largest extent possible?

Have you bothered to actually read the details of the new negotiated trade treaty now known as USMC or are you trying to make a point based on nothing?

The wall will slow the flow of illegals entering the US. It will not stop the flow of asylum seekers. The new trend is for asylum seekers to cross the border and seek a border patrol person to be arrested and claim asylum. It’s called going to the front of the line.

Reagan’s mistake was that he allowed amnesty with the promise of border security. That promise never came to fruition.

actually that isn’t true, what Reagan did was he made a deal with the Democrats , if they appropriate funds to secure the border he would grant them a one time amnesty to illegals, and he did and the Democrats the sneaky bastards they are reneged and Reagan never trusted the Democrats again

he didnt “allow” it , he was tricked into by lying democrats.

I cant agree with you on that one, what is the point of having immigrations laws or securing the border of having customs at Airports if we are allowing every Tom, Dick, Muhamad, Wolfgang Jose, Lin ho,Olga and Natasha into the country.

why have passports, just have open borders and a free for all.

you would think that is ridiculous no?

The DACA folks broke the law, unless congress changes the law and has open borders , it is against the law to enter the United States without proper permission.

Im not sure what is so difficult about that concept?

I think you misunderstand my position. I’m not advocating that we allow every Tom, Dick, Muhamad, Wolfgang Jose, Lin ho, Olga and Natasha into the country. What made you think that was my position???

I’m ok with a path to citizenship for Dreamers once border security funding has been secured.

Maybe this comment was misconstrued? I am in not in agreement with giving them citizenship. I think the compromise is maybe a greencard can be granted to the dreamers but never a path to citizenship! Also any deal has to involve paying back taxes, and a deportation for the parents that brought them here where they will be given an opportunity to apply entry. I am unequivocal about this!