Nikki Haley warns that politics is ‘reaching the point of hate’

Sorry Nikki, the left reach that point 2 years ago and it’s getting worse. Buckle up the fun is about to begin.

NIKKI HALEY WARNS THAT POLITICS IS ‘REACHING THE POINT OF HATE’

DALLAS — Former U.S. Ambassador to the United Nations Nikki Haley warned at an event Friday night that American politics is “reaching the point of hate.”

Haley was the marquee speaker at Turning Point USA’s Young Women’s Leadership Summit, where rumors and speculation about a possible Haley 2024 presidential campaign hung as a backdrop.

TPUSA President Charlie Kirk introduced her as the former U.N. ambassador and added coyly, “maybe other things in the future.” He was less subtle in his closing remarks, telling Haley he would “love” to see her become the “first woman president.”

During a 45 minute question-and-answer session with Kirk, Haley warned that the political climate is approaching dangerous levels of enmity.

“My concern really is the fact that when I hear how toxic the politics are — I believe in being passionate, I do. But when it gets toxic and I say that now it’s getting to where people are calling each other evil. They’re hiding behind anonymous things and they’re saying things that are really reaching the point of hate,” Haley said. 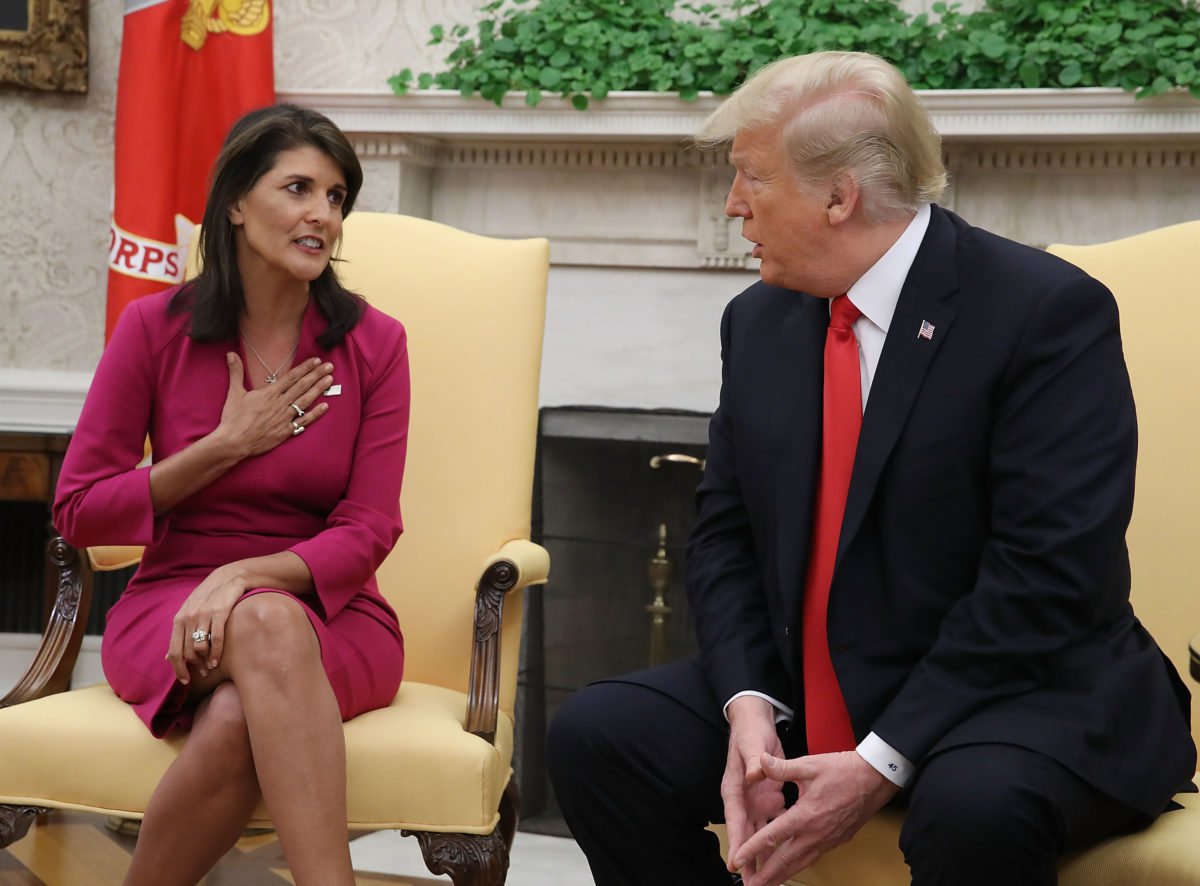 “When I hear them call each other evil, it bothers me because I’ve seen evil. I’ve been to the Democratic Republic of Congo, where they use rape as a weapon of war. I’ve been to South Sudan where they’ve taken babies from women’s arms and thrown them into fires. … That’s evil. What we’re having in our country is a debate of ideas. That’s it,” Haley said.

“And what I worry about is that Americans are forgetting to be grateful, because on our worst day we are blessed to be in America,” she added.

At another point in the discussion, Haley highlighted her response to “The View” host Whoopi Goldberg, who had attacked Haley for her position on abortion.

Whoopi “made my point, because she immediately started attacking the other side without listening to what I was trying to say. I wasn’t judging anyone. I wasn’t criticizing anyone. I was saying why I continue to fight,” Haley said.

Nikki Haley Warns That Politics Is ‘Reaching The Point Of Hate’

Former United Nations Ambassador Nikki Haley gave a glimpse Friday night into how she will position herself for political life after President Donald Trump.

Sorry Nikki, the lft reach that point 2 years ago and it’s getting worse

“And what I worry about is that Americans are forgetting to be grateful, because on our worst day we are blessed to be in America,” she added.

She’s right. People have no idea what low standards other countries have for their citizens or human life for that matter.

And it is people like me (and many here) who don’t want to see the slippery slope take this country there.

I think people forget how aggressive the left was during the Bush years. We heard the same things about Bush that we’re hearing about Trump. That’s all they have, they can’t win a war of ideas.

Wait just a minute. Both sides are equally and pathetically out of control. The vitriol from the right toward Presidents Clinton and Obama was just as nasty…

There’s a difference between criticism and political attacks. If you think both sides are the same, you haven’t been paying attention. Minus the brief period of time where Bush had huge approval numbers after 9/11, the media was extremely negative, similar to Trump’s. It was a damn love fest for Obama.

saying things that are really reaching the point of hate,” Haley said.

That ship has pasted long ago !

Yeah, not even close. While there were pockets of people that despised Clinton and Obama, it wasn’t prevalent in the media.

Better than close. It wasn’t “prevalent” in the media because the media is largely biased left. It was however prevalent at FOX which was born of the right during and due to right wing angst over him.

Lmao, 9 GOP investigations into HRC/Benghazi and she’s still sipping lemonade on the porch of her upstate New York home.

we have proof of law breaking.

Then why for gawds sake hasn’t Trumps DOJ locked her up???

Oh gee, I don’t know… they’re cowards and don’t want to be called dictators for locking up political enemies? Had I done a FRACTION of what that hag did when I was Military Intelligence I would STILL be in prison. There’s no question that she broke the law.

The Benghazi was a mistake and despicable but I don’t think she committed crimes. The investigations were stupid on it, we knew what happened. What should have happened was immediate dismissal of anyone making decisions regarding the response. . . up to and including the President. It was incompetence, not criminal in my opinion.

Nonsense. Even the coverage on Fox was pretty timid compared to what we’ve seen with Bush and Trump. The flat out accusations of racism without a SHRED of proof is stunning. Fox came no where CLOSE to the crap thrown at Bush & Trump. . . and keep in mind, I didn’t particularly care for Bush and prior to Trump’s record, I hated the idea that he was going to be the President. I voted for him ONLY because I believed Hillary was a criminal. If ever there was a year I would have voted Democrat, that was it… fortunately, Trump’s policies have been pretty spot on to what I want done with a few exceptions.

Oh gee, I don’t know… they’re cowards and don’t want to be called dictators for locking up political enemies? Had I done a FRACTION of what that hag did when I was Military Intelligence I would STILL be in prison. There’s no question that she broke the law.

Right, so I’ll ask you again, particularly in light of Trump’s endless campaign promises to do so, why, with the surplus of evidences in hand, hasn’t Trump instructed his AG to do so. He seems to have no trouble giving him instructions to block/ignore subpoenas.

Nonsense. Even the coverage on Fox was pretty timid

That’s your opinion of it as a FOX enthusiast.

The Benghazi was a mistake and despicable but I don’t think she committed crimes.

That’s because the real crimes she committed aren’t the things the GOP investigated because those crimes, too many of them were in on.

I used to like Nikki Haley, and still don’t dislike her, but she’s a “kinder, gentler” Republican which is very bad now. Her brand of politics is resorting to appeasement in dealing with the totally corrupt establishment and press. It just can’t be done any more or we’re finished as a country.

Go ask Trump. I’m not in charge of him. I said it very clearly, I think they’re cowards for not putting her ass in jail.

I don’t disagree that half of the Republicans are dirty as well.

It’s not an OPINION that the coverage was slanted towards Democrats and Obama was treated with kid gloves by Fox, one of the reasons I don’t care for them. I like your pathetic attempt to paint me as a “Fox enthusiast” though. I wouldn’t trust them to mow my lawn. I wouldn’t trust the other outlets to clean my crapper.