By now supporters of the president have grown very weary of hearing him called a “racist” and a “bigot” by perpetually angry Leftists who can’t come up with coherent arguments against his policies, so name-calling is all they have.

Naturally, the propaganda-disposed “Mainstream” media has enabled and propagated the narrative that Americans elected a white supremacist to our highest office.

But a pair of researchers at the University of Pennsylvania beg to differ. They have just produced a new study showing that racism under POTUS Donald Trump has fallen, and in a statistically significant way. 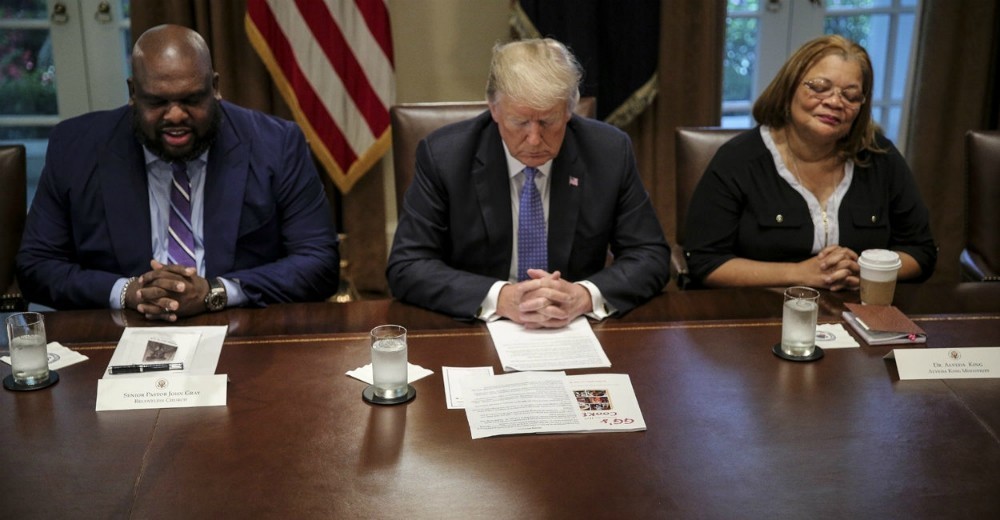 So, a new study found that America is LESS racist under POTUS Trump than it...

Where are all the Travon Martin style protests? The Ferguson riots? The Baltimore riots? Etc. etc.

The fact is that racial tensions were deliberately set on fire by the Obama Regime just because it suited their needs and desires.

None of this crap is ongoing since Trump took office. Instead blacks are gaining in economic strength.

A GOOD business man is never a racist, wouldn’t make sense considering the number of people they have to hire.

Is No Longer In The
WhiteHut

Things must get better

Yes, but those on the left will argue that it’s worse because in the increase in reported hate crimes.

To them it’s a one way street, the cannot see hate coming from their own side any more than the fascists on the right can see their own.

Racism has always came from the left. I was the Republicans who freed the slaves from the democrats. The democrats were so pissed that they started the KKK to fight bake. In all fairness at that time the democrats were the right and far right, and republicans were the liberal/libertarians of the day.

That all changed in the sixties and seventies with the split between democrats and “Dixiecrats” and the following realignments of the two major parties that followed capping off with Reagan’s breaking the “solid south” for what has now lasted three full decades. Do you have an actual point here?

The video doesn’t tell anyone what Your Point is.

I disagree. I think the left-leaning liberals have gotten more racist, and they seem to be in the majority. Even cities in Oklahoma, such as my hometown of Tulsa, are turning purple and blue. The younger generation is buying the left’s version of racism hook, line, and sinker.

In All in the Family, a sitcom of the 1970s, Archie Bunker’s son-in-law accused him of asking if he was ■■■■■■ when they were introduced to each other.

Archie’s reply: Isn’t that what a ■■■■■■ father would ask in the first place?

Why is racism a bad thing?
Who invented the terms “racism” and “racist” anyway?

Any decent person with an average IQ will worry about his family, his children and grandchildren, his community, his environment, his country — and his race (unless he or she is brainwashed)

So do a lot of white people. Not all blacks and not all whites however do.

All in The Family was a parody. The whole point of the show was to show how idiotic and wrong Archie was.

Carol O’Connor new better, so did the entire staff and everyone with a pulse watching.

So do a lot of white people. Not all blacks and not all whites however do.

Really , even the white liberals who preach white privilege ?

Where are all the Travon Martin style protests? The Ferguson riots? The Baltimore riots? Etc. etc.

All of the money that was getting pumped into funding that has been shifted to paying for the migrant caravans.

That was all done to trigger a race war. It’s too early in the collapse for that though.

Yet another utterly baseless conspiracy theory.

Yet another utterly worthless shitpost with no rationale or explanation.

I wasn’t in any way unclear. Your statement was baseless and cannot be supported with any verifiable fact.