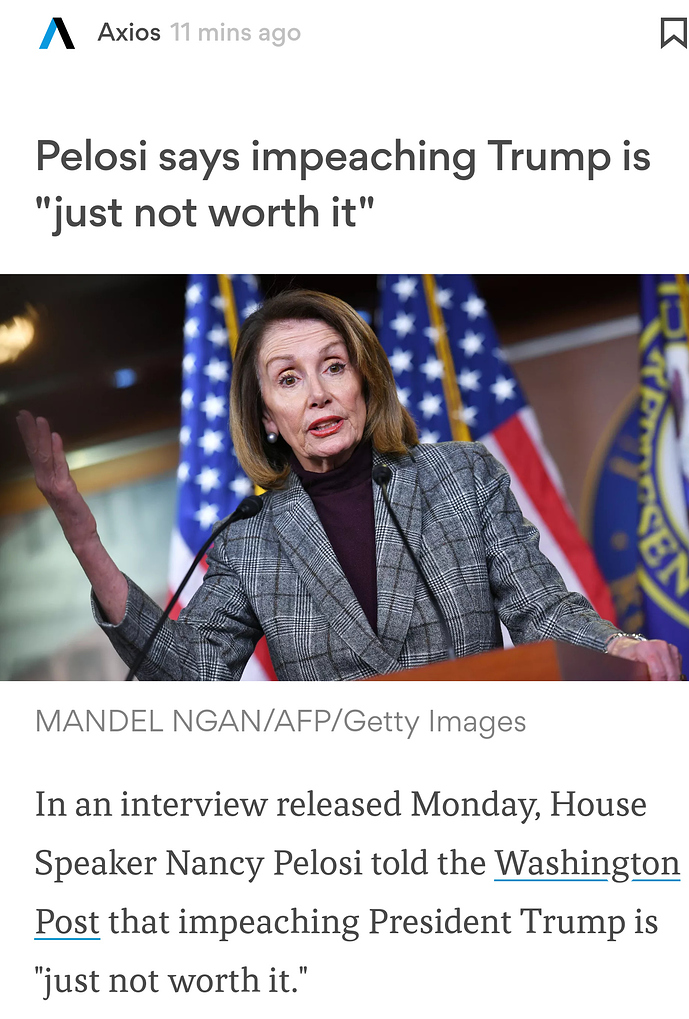 PELOSI: “IMPEACHMENT JUST NOT WORTH IT”

Democrats are now doing a 180 on impeachment talk! Looks like they know it’s idiotic!

In an interview released Monday, House Speaker Nancy Pelosi told theWashington Postthat impeaching President Trump is “just not worth it.”

“Impeachment is so divisive to the country that unless there’s something so compelling and overwhelming and bipartisan, I don’t think we should go down that path, because it divides the country. And he’s just not worth it.”

Why it matters:Pelosi’s comments — which mark the first public stance she’s taken firmly against impeachment — will certainly rattle rank and file Democrats, especially progressives and party activists who have been calling for impeachment since the day they took back the House in the 2018 midterms.

Progressives will not accept this, looking like we may have a democrat civil war soon! 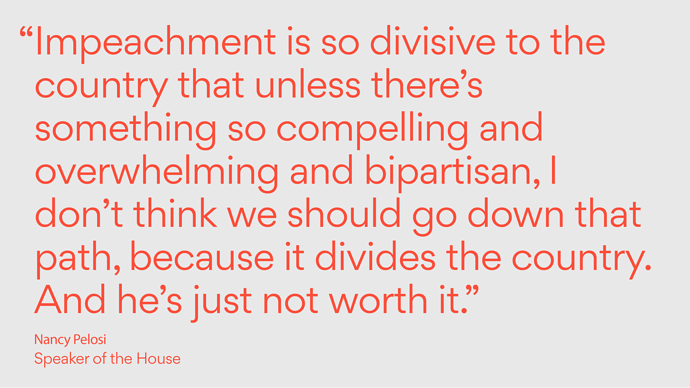 "I don’t think we should go down that path, because it divides the country."

Of course they’ve got nothing. They had nothing to begin with. Now that Robert Muller is about to release his report, which will also contain a whole lot of nothing, they have to back pedal. My only hope is that Trump doesn’t just let this serve as water under the bridge. He needs to return the misery for the next two years.

MUELLER REPORT HAS NOTHING…

These loons have been slowly and gently, lowering expectations in the media for all the brainwashed, whos in whoville!

The entire criminal establishment will get behind Trump in the next election. Just watch.

I think the NeverTrumpers of the republican party will have to put their tails between their legs, and get behind him.

The Dems will have to act like they are still fighting Trump for the sake of appeasing their base, but will essentially result in a big bunch of nothing.

PELOSI: “IMPEACHMENT JUST NOT WORTH IT” 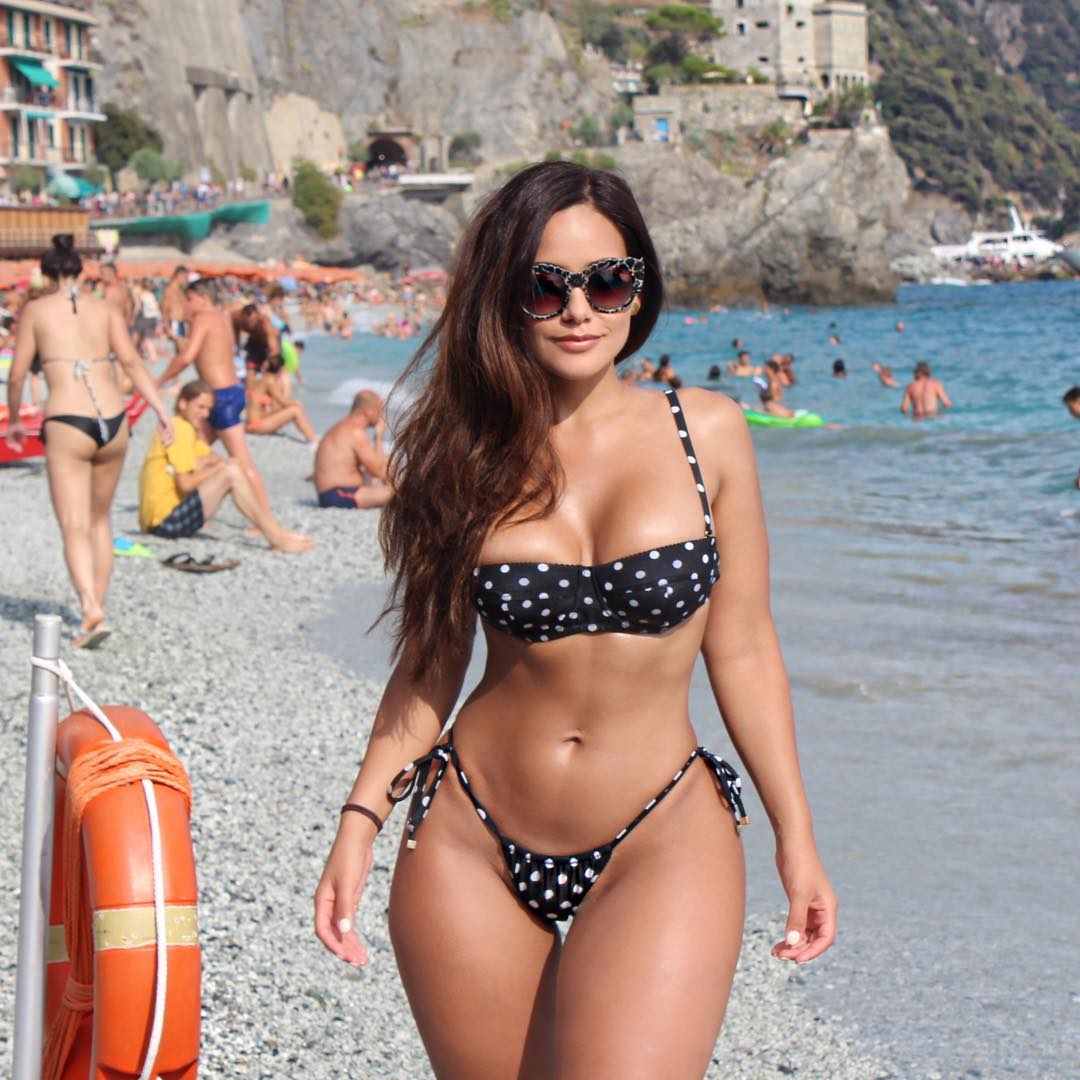 They’ve been steadily lowering expectations from outright treason down to questionable business decisions and they have NOTHING. They’ve threatened dozens of people with prison or worse and they still have NOTHING.

Pelosi had nothing, zilch, nada and bupkis

The Democrats break a major campaign promise! The true believers … probably won’t give a darn. The Democrat base might not care if the DNC openly advocated replacing the Statue of Liberty with one of Stalin.

Now would be a nice time for Huber to come out with something.

IF he decides to run again, which I think he will.

And IF all of the socialist wannabees don’t get whipped up into a frenzy.

They don’t have evidence compelling enough to force Senate GOP to the table. They are better off focusing on the 2020 campaign.

But she and her fellow liberals have a solemn duty to hold the traitor accountable. …doesn’t she?

Or could it be that every damn thing that that has come out of their filthy mouths since the election of 2016 has been a black lie perpetrated by Satan himself?
Apparently Nancy has noticed that those who try to take Trump down are spitting into the wind.

Maxipad Waters would disagree. She says they have enough to impeach the President without Mueller’s report.

maxine waters coudnt find her ass with both hands, they rolled the dice and came to their senses, if they impeached him the senate wont, but the smarter play for the democrats would have been to impeach him , now they look like they have no teeth or back bone.

Oh Nancy is suddenly worried about being divisive? Remember her smug ass parading around a tea party protest with her gavel?

Flashback: Pelosi Taunts Tea Party With Big-A$$ Gavel on March to Capitol to...

Here’s a Pelosi flashback for you while we wait for the big news today. Speaker Pelosi taunted the Tea Party with a big-A$$ gavel. Pelosi and fellow radicals marched through the Tea Party protest on the way to the US Capitol to ram through Obamacare....

That is because they were banking on Cohen’s testimony and the American public didn’t buy their narrative and their hatched scheme. It was a epic failure!

I like how cons believe that this means that Trump is innocent. She also said that impeachment without compelling evidence is not worth it. NO ONE has seen the Mueller report yet. So this could change in an instant.

If I was a lib I’ll be upset that they lied to me.

Impeach 45 was the reason why so many came out during the midterm.

Why it matters:Pelosi’s comments — which mark the first public stance she’s taken firmly against impeachment — will certainly rattle rank and file Democrats, especially progressives and party activists who have been calling for impeachment since the day they took back the House in the 2018 midterms.

Or is it a diversion as the committees search for the ham sandwich.