Muslim Uber driver throws gay man out of car, drags him along street, says he’d be beheaded in his country

I would love to know what the democrat gay community thinks about this. Have the usual suspects condemned this as a hate crime? Where is Commisar Deblasio?

“My friend jumped out when we got to a red light, while the #Uberdriver continued to call us f***ots, and told us we would be beheaded in his country.”

That only happens in Sharia states.

The Qur’an contains numerous condemnations of homosexual activity: “And [We had sent] Lot when he said to his people, ‘Do you commit such immorality as no one has preceded you with from among the worlds? Indeed, you approach men with desire, instead of women. Rather, you are a transgressing people.’…And We rained upon them a rain [of stones]. Then see how was the end of the criminals.” (Qur’an 7:80-84)

Muhammad specifies the punishment for this in a hadith: “The Messenger of Allah (peace and blessings of Allah be upon him) said, ‘Whoever you find doing the action of the people of Loot, execute the one who does it and the one to whom it is done.’” (Sunan Abu Dawud 4462)

Also, Sharia forbids not just the consumption of alcohol, but its sale as well. A hadith depicts Muhammad saying: “Verily Allah, the Exalted, has forbidden wine. So who hears this verse and he has anything of it with him, he should neither drink it nor sell it.” (Sahih Muslim 3835) 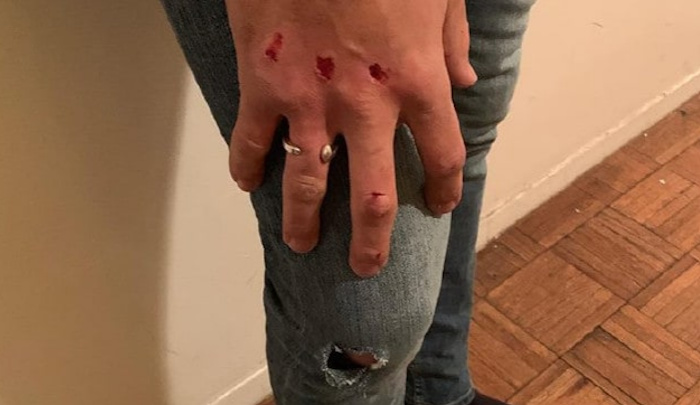 “Man claims he was dragged along a street after hugging husband,” by Alexis Carey, News.com.au, November 30, 2018:

An alleged victim of a homophobic attack at the hands of his Uber drive has released graphic pictures of his injuries as a warning to other passengers.

Taray Carey, 27, was travelling in an Uber in New York on November 28 with husband Alex Majkowski and another friend when the couple shared a hug.

According to Mr Carey, the Uber driver was angered by the intimacy, allegedly calling the pair “f***ots” and telling them they would be “beheaded” if they lived in his home country.

Mr Carey attempted to leave the vehicle, but was allegedly dragged down the street as he clung to the car while the unnamed driver “gunned it”.

He said the incident had been reported to the police, but that they had been “patronising” in their response.

He shared details of the alleged incident on Facebook along with several photographs of his wounds.

“Tonight I was thrown out of an #uber by a homophobe,” Mr Carey wrote.

“I tried to step out, and he gunned it while my husband was still in the back seat.

“My friend jumped out when we got to a red light, while the #Uberdriver continued to call us f***ots, and told us we would be beheaded in his country. This is not OK!”…

Muslims are best avoided. With Uber, passengers get a preview of their driver, who they can decline.

Just say “NO” to Muslims.

It’s a matter of personal security.

There are reports of incidents like this across Canada. Never by the mainstream news here, only on independent news sites and on social media. They act exactly the same wherever they are. Truly disturbing.

Nothing will happen to this Uber driver.

The Muslim needs to be reminded he is no longer in his country and to respect the people and laws of this country.

Where is Commisar Deblasio?

Better yet - where is Linda Sarsour or that newly elected Muslim woman from Minnesota who married her brother to get him into the US.

Yes , the religion of peace and tolerance .

Nothing will happen to this Uber driver.

Certainly not in NYC. Have you ever noticed that the progressive agenda is IDENTICAL to the Muslim agenda:

I find it hypocritical that the Clinton News Network, or any of the major news outlet wont even acknolwede the story.

Oh wait, its criticizing islam and they dont want to be targeted.
So where is the Southern poverty law center mouthpieces

Where are the ANTIFA crowd?

where is the Gay, lesbian community ,why are they not boycotting Uber?

why hasnt Uber said anything?

What I see here is there are two sets or rules , one for muslims and one for everyone else and there is a hierarchy

Thank you liberals for his hypocritical view

You mean “better not”, I think.

The Muslim needs to be reminded he is no longer in his country and to respect the people and laws of this country.

Remind them all you want. It has no effect on their tenacity, depravity, lunacy or loyalty to their their demented founder, Muhammad.

why hasnt Uber said anything?

Uber is an ap. Uber doesn’t own or insure vehicles used in its services. Uber pays whoever applies to get an instant license to perform services that should be under regulated commercial activities.

Anyone that uses Uber does it at their own risk and is guaranteed NOTHING…especially in regard to personal safety.

yes, I meant " You better NOT"

You should be able to edit that.

I want to hear the driver’s side of the story.
I know Muslims in certain parts the world kill homosexers but not all. Supposedly two guys were just “hugging” . Ummmmmm… I know how libs lie too. Like “the migrants are just asking for asylum”. Uh huh. Muslim men hug each other… as men. (See pics below) So I doubt the “just hugging” story. Maybe the two guys were doing more than hugging. Too bad we cant hear the driver’s side of the story. 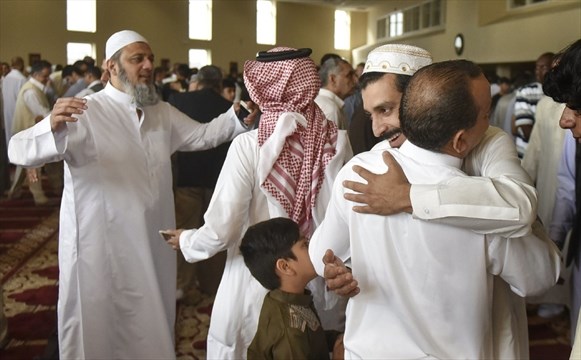 Anyway… I think Sharia needs to be called out as barbaric when it is in fact barbaric. But if people wearing MAGA hats can be refused service, I am not going to be so quick to judge an Uber driver who tells a rider to get out. I want more info.

Most Muslims I know DO obey the local laws. Even in those places, for example, Minnesota, where the largely Somali cab drivers simply didn’t want to pick up everyone from those transporting liquor to blind people with guide dogs, the state Cab Commission came down on them like rocks, saying they needed to give all paying customers who wanted one a ride or get out of the business.

I’d rather have my Muslim immigrant & other neighbors around me than some of the native borns, particularly elderly retirees who have no lives & target everyone from joggers to families with one or more kids, &, quiet frankly, am sick of being asked to accept every GLBTQ demand or be flamed as a bigot.

So do Muslim women. A kiss on the two cheeks of the face is considered a perfectly acceptable greeting when it’s between members of the same sex in Muslim majority countries.

Having spent some time in one of these countries three times, no one’s behavior towards me was problematic, &, as I said, I’m tired of being expected to accept every

demand or be flamed as a bigot.

I said “the Muslim” not all Muslims.

I was responding pre coffee.

Don’t know where that is, but a lot of people from Yemen settle in New York.

I was responding pre coffee.

LOL…I can’t even type without my morning coffee

As for reaction to homosexuals in the Muslim world, probably depends on what country, although I would bet dollars to doughnuts in 0% of them does anyone care if homosexuals keep that fact to themselves.

Those particular individuals would simply be among the unwed populations living with family. “Honeymoon in Purdah” is a good book about life in Iran. Canadian journalist and her gay male roommate traveled together, posing as husband and wife.