One way trips for those wanting to be culturally enriched…

Jihad Watch brought you this story on Tuesday; here are more details. Note that Morten Bøås of the Norwegian Department of Foreign Affairs “thought the group of men may have been inspired by ISIS or radicalised through the web.”

Yes, of course. “Radicalised through the web.” What else could possibly have happened? Morten Bøås is sure that there couldn’t possibly be any jihadists in Morocco. Islam is a religion of peace! If any happened to be there, it’s because they were radicalized on the Internet!

And this dope is in the Norwegian Department of Foreign Affairs.

In any case, Louisa Jespersen and Maren Ueland are more casualties of the Left’s fantasy world. What were they doing, two young women alone, camping in Morocco?

They no doubt learned in today’s universities, which are saturated with moral relativism and contemptuous of absolutes, that there is no dispute between people that can’t be settled by mutually respectful “dialogue,” and that the troubles in the world today are primarily the fault of the U.S. and Israel. So why should two girls from Scandinavia have anything to worry about in Morocco? They no doubt learned that Islam is a religion of peace, and that only racist, bigoted “Islamophobes” think otherwise. So why should they have had any reason to be concerned about hiking in Morocco?

Those who might have warned them of the risk are subject to furious and concerted demonization. The Southern Poverty Law Center (SPLC) — and the establishment media that treats the SPLC as if it were a reliable source — sees only one group of genuinely evil people in the world. Those who recognize that there are evil forces in the world that are set against the United States, and who want to protect Americans against Islamic jihadists, criminal migrants, and more, are the only evil ones. Jespersen and Ueland almost certainly had nothing but contempt for such “intolerance” and “hate” manifested by foes of jihad terror and unrestricted illegal immigration.

“Backpackers killed in Morocco by ‘ISIS terrorists’ with one filmed being beheaded,” by Andrew Koubaridis, News.com,au, December 20, 2018:

Two Scandinavian backpackers were hacked to death and one beheaded in what is believed to have been a terrorist attack in Morocco.

Louisa Vesterager Jespersen, 24, from Denmark, and Maren Ueland, 28, from Norway, were knifed and beheaded on camera while camping in the Atlas Mountains.

Their bodies were found on Monday morning.

Footage of the horrifying attack has been shared on social media and has caused outrage in Morocco. The footage shows a blonde woman screaming while a man cuts her neck with what appears to be a sharp kitchen knife.

“It was horrible. They were broken,” one of the French hikers said. “We warned everyone we saw in Imlil not to go up there. I did not want more to see what we had seen…It was a big shock, we’re thinking about it all day. It makes you think about what’s important in life.”

A Norwegian newspaper is reporting four suspects had links to ISIS and had sworn allegiance to the terrorist group.

Police tonight announced three men had been arrested. A fourth man was taken into custody on Tuesday.

In a video circulating on social media a man is heard saying in French: “This is for Syria, here are the heads of your Gods.”

The bodies were found in a remote mountainous region, 10 kilometers from the village of Imlil – often the starting point for treks to Mount Toubkal, North Africa’s highest peak.

Ms Jespersen and Ms Ueland were on a month-long trip in Morocco.

Hotel workers in the Moroccan capital claimed Ms Jespersen and Ms Ueland were staying with three other girls and were spotted with local men before they set off on their mountain trek.

Locals told media before the arrests three “homeless” men had been seen in the area.

One hotelier said: “Three homeless men came from Marrakech and pitched a tent right next to the girls’ tent. The men were not from round here.”

Morten Bøås at the Norwegian Department of Foreign Affairs has said that the killings lack the professionalism of more established terrorist groups.

He told local media that the group of men may have been inspired by IS or radicalised through the web.

“Much now indicates that the killings could be politically motivated and thus a terrorist act,” Danish Prime Minister Lars Lokke Rasmussen said at a news conference on Thursday.

Morocco’s general prosecutor said on Wednesday that a suspect arrested in main tourist hub Marrakech was a member of a militant group, but did not name the organisation.

The Danish intelligence service said in a statement Islamic State could be responsible.

Morten Bøås at the Norwegian Department of Foreign Affairs said the killings were unlikely to be the work of more established terrorist groups.

He told aftenposten.no that he thought the group of men may have been inspired by ISIS or radicalised through the web….

Morocco’s public TV channel 2M said on its website that investigations showed that the slaying of the two tourists was related to local militants.

Morocco is generally considered safe for tourists but has battled for years with Islamic extremism for years, and thousands of Moroccans joined the Islamic State group….

I’ve been avoiding posting this. Didn’t want the normies and boomers getting triggered and flagging me. I have the full video as well as a remix video that just has the sounds of the beheading to when one of the girls was alive, living life, and welcoming refugees.

They were in the videos in their underwear, so you know what happened before they got their heads chopped off.

Post it and blur it.. I dont want to spoil the holidays’ bliss, but bliss from ignorance is no fun at all.

I was thinking we need a private section that everyone is allowed in to but won’t be visible to non-registered users. Maybe @Patriot can figure this out.

WARNING - CLICKING THIS WILL SHOW YOU THE REAL WORLD

Morocco is generally considered safe for tourists but has battled for years with Islamic extremism for years, and thousands of Moroccans joined the Islamic State group….

When white Blond European girls go to a country such as Morocco that’s almost 100 percent Islam what did they expect will happen?

I don’t want to come off cold here but when they go running off to country like Morocco which has extremist elements expect bad things to happen.

This one does not have the footage, just the sounds paired with a video of her alive.

I saw the video when it was first posted. It is truly terrible and it WILL rattle most people. It is being taken down everywhere it’s hosted by the government of Norway. They really don’t want this video out there. I generally have a rule against gore posting - but I am not sure that applies here. While these were brutal killings, they were motivated by religious and political beliefs. People need to understand the full scope of this issue - including the death and destruction that comes with it.

I will let the video stand - so no one should bother flagging it. The warning provided by @BasedSlav was sufficient. If you don’t want to see it, don’t click on it. I will consider building a private area for these types of posts. We are on a .com now and need to be compliant in what is accessible to the general public.

That was awful. The girl in the video is very much alive when they start sawing through her spine. You can hear her gasps and death rattles go on for seconds after the jihadi starts cutting. She felt every second of that and died in absolute terror. This is Islam. Anyone who tells you otherwise is lying. This is Islam, and it needs to be purged from all Western countries, by fire if necessary.

Unfortunately, the people that should watch it would not know about it. These are the leftists. These clowns are the one who are supporting the massive influx of these savages into Western and European nations. They’re also supporters of gun-control.

Good save @BasedSlav - although hosting of this will draw attention.

I watched it on bitchute before they blocked it. It is as @AngryBarista describes. Everyone with a “Coexist” sticker should be forced to watch it. It should be made accessible to everyone.

We are on a .com now and need to be compliant in what is accessible to the general public.

Yeah I was thinking about this while ago, we don’t want to get blacklisted or shadow banned from likes of google as last place was,

Not sure what that entails but I trust your experience so we don’t have to move or starting over again anytime soon.

Everyone with a “Coexist” sticker should be forced to watch it. It should be made accessible to everyone.

What are you talking about, bigot. They are “coexisting” just fine in that video, in pieces.

Anyone who won’t watch this video is a pussy and loses the right to criticize Islam and the left. Get off this site and go hang out in what is left of the HuffPo comments section.

Before and After Cultural Enrichment: 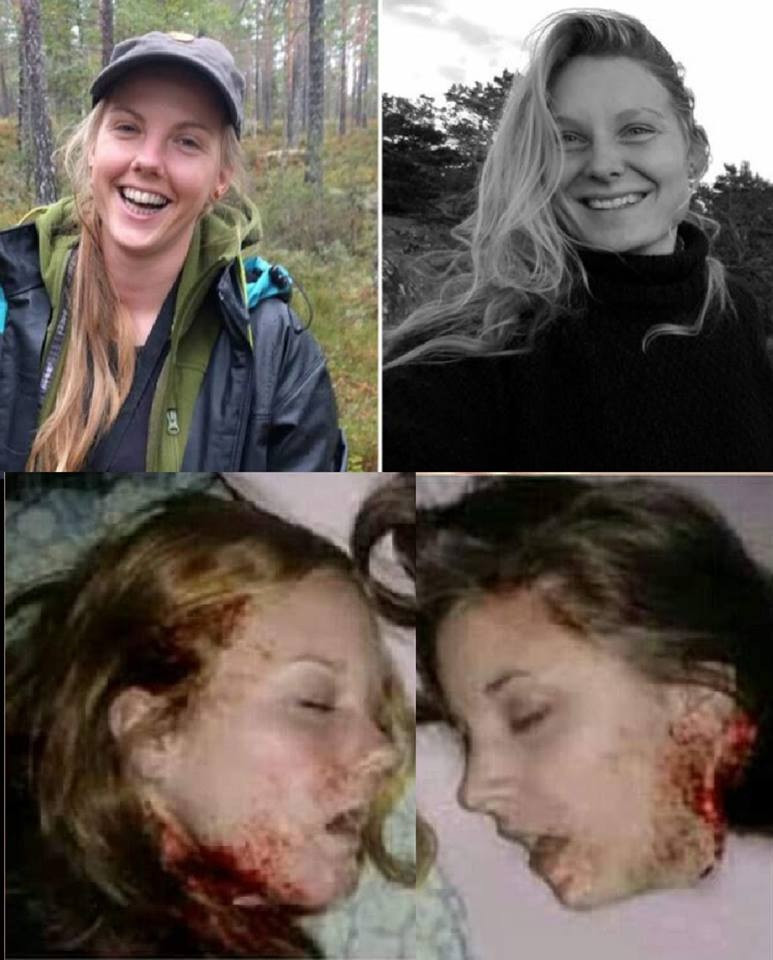 We are on a .com now and need to be compliant in what is accessible to the general public.

Like I said, we can always blur the video for founders only or something. Or I can move this thread to Longue where only trusted members can view the thread.

Or have off site link somehow that only certain members can have access too.

Let me see how much love and attention it brings. I am not a fan of government suppression of content. This provides very real context to what Samuel Huntington wrote about so long ago — the Clash of Civilizations.

We don’t carry ads here for a reason.

I’ve watched thousands of gore videos. This one got me. I’ve been thinking about it for days.

This is the only benefit of having 13th century savages in Europe and the US; they get rid of our indoctrinated leftists. Listen to that thot scream! Her imagined intellectual and moral superiority doesn’t make her neck knife proof. I hope her last thoughts, before she screamed for her mama, was the sudden realization that all of us evil “nazis” are right.

If they expected that to happen? If they could have seen their death as we did would they have gone? I doubt it.

Yet, why did they? Could it possibly be because they’ve been fed and believe the lies they’ve been told? The world is full of love,unicorns and rainbows?