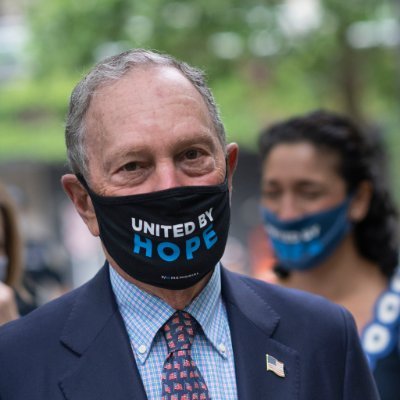 .@realDonaldTrump - we know many of the same people in NY. Behind your back they laugh at you & call you a carnival barking clown. They know you inherited a fortune & squandered it with stupid deals and incompetence. I have the record & the resources to defeat you. And I will. twitter.com/realDonaldTrum…

Mini Mike is a 5’4” mass of dead energy who does not want to be on the debate stage with these professional politicians. No boxes please. He hates Crazy Bernie and will, with enough money, possibly stop him. Bernie’s people will go nuts!
TWR February 13, 2020, 3:11pm #2

Trump took a couple of hundred million and turned it into several billion creating jobs all over the US and around the world.

Yes, the fact that Trump is nothing but a trust fund baby is not lost on me. In fact, I stated as much in my OP. Trump ran countless businesses into the ground moving from bankruptcy to bankruptcy. Many people lost their jobs and livelihoods because of his poor business decision-making. All of that is verifiable.

Mike Bloomberg on the other hand got laid off from his job and turned around and started his own company which is without question tremendously successful.

How many failures compared to how many successes? None of those “lost jobs” would have existed without his projects to begin with.

What is the net on jobs lost vs jobs gained?

There are literally hundreds of thousands of people working at Trump properties around the globe today.

If anyone is squandering their money it is Bloomberg on this failed bid for president.

The same people that he is laughing about Trump with are probably the ones gassing him up to get him to think that he could actually win this election. It’s just not possible. The dude isn’t even on the radar in terms of delegates. Does he just not understand how the Democrat process works? He can trash talk on Twitter all day but that’s not going to get him the nomination.

Mike Bloomberg on the other hand got laid off from his job and turned around and started his own company which is without question tremendously successful.

At what cost ? ALL of his employees claim he was a total PRICK !
Mini Mike has too many business interests in countries that have been designated by the U.S. government as a strategic competitor and unfriendly to US . This turd switched over to being a Republican specifically to win the mayoral election in 2001 . WTF ? Mini Mike demanded one of his female employees, Sekiko Sakai, get an abortion (“Kill it” was how he allegedly issued the directive) OMG !!!

Mayor Bloomberg let a crooked private contract, one that was meant to help digitize city payroll, increase more than tenfold in budget size. Or the time Bloomberg’s administration pushed ahead with a deal with J.P. Morgan that allowed the bank to demolish a skyscraper despite not having proper safety permits secured. Two firefighters died as a result.

Yeah David, I heard that this morning on my way over. Very nice…

The thing is they’re both from the city and Mike knows him. Looking forward to more of this…

Trump is nothing but a trust fund baby who inherited a fortune from his father who actually built businesses and created value.

What has Bloomberg done again? Other then design a system of 1’s and 0’s to take advantage of stock trading?

If anyone is squandering their money it is Bloomberg on this failed bid for president.

I have the record & the resources to defeat you.

Spend away, dude!! You won’t have the delegates to get the nomination.

All of that is verifiable.

I suggest that you produce a timeline of President Trump’s business failures and successes so we can all see the ENTIRE picture that you so blithely glossed over.

Spend away, dude!! You won’t have the delegates to get the nomination.

This is looking like a strange year ahead, so I wouldn’t make much of a prediction on Bloomberg’s chances. This thread, though, is an indication of how bad it is for liberals now - all they can do is gloat over some remark about Trump’s money. Bloomberg is going to need a few more boxes to dunk on Trump.

I can’t stop laughing my ass off over this.

Have your fun now because you are going to be crying once again on election night.

Whatever his successes they pale in comparison to Bloomberg…

Success to a liberal is letting an illegal cross the border and them giving them welfare. So, I’m not surprised at the bar “you” set.

Bloomberg isn’t touching his fortune. Junk change he’s spending here. Unlike Trump, he wasn’t a trust baby, his parents were an accountant and a secretary. His wealth dwarfs Trumps. Trumps an expert at bankruptcy, and quite adept at responding to lawsuits because he’s a unscrupulous boorish asshole. So measuring success, Trump’s dunked by Bloomberg.

Millions is junk change? To whom exactly?

According to Forbes , Bloomberg’s net worth is $52 billion.

And when Trump was campaigning he lied and said he was worth 7 billion.