Washington (CNN) — Former acting FBI Director Andrew McCabe is confirming for the first time publicly that there were high-level discussions at the Justice Department about recruiting Cabinet members to invoke the 25th Amendment to remove President Donald Trump from office in the aftermath of former FBI Director James Comey’s firing.

The discussions also included speculation about which Cabinet members could be on board with the idea, McCabe said in an interview with CBS’s Scott Pelley. According to Pelley on “CBS This Morning” Thursday, McCabe confirmed the discussion among Justice Department officials. This segment of the interview, which was taped for “60 Minutes,” was not aired Thursday morning.

McCabe, who was fired from the FBI last March, also said he ordered an investigation into whether Trump obstructed justice as a way to preserve ongoing inquiries into Russian election meddling in case there was an effort to terminate them.

The comments resurface the extraordinary tension between Trump and the nation’s top law enforcement officials, though a number of the ones who worked with McCabe in the early days of the administration have since been dismissed or resigned.

In September, citing sources familiar with memos authored by McCabe, CNN reportedthat Deputy Attorney General Rod Rosenstein discussed wearing a “wire” to record conversations with Trump and recruiting Cabinet members to invoke the 25th Amendment to remove Trump from office. Also in September, an anonymous “senior official in the Trump administration” claimed in a New York Times op-ed that there had been “early whispers within the cabinet of invoking the 25th Amendment.”

It was not mentioned in the segment that aired Thursday if McCabe or anyone else approached Cabinet members directly to discuss the idea.

“These were the eight days from Comey’s firing to the point that Robert Mueller was appointed special counsel. And the highest levels of American law enforcement were trying to figure out what to do with the President,” Pelley said, adding that people involved were “counting noses” and speculating which Cabinet officials may be on board with the idea.

In a statement on Thursday, a Justice Department spokesperson said Rosenstein – who repeatedly disputed the “wire” revelation back in September – again denied pursuing or advocating for the use of the 25th Amendment to remove Trump from office.

“As the Deputy Attorney General previously has stated, based on his personal dealings with the President, there is no basis to invoke the 25th Amendment, nor was the DAG in a position to consider invoking the 25th Amendment,” the statement read.

Both Trump and the White House on Thursday called McCabe a “disgrace,” with the White House saying he had “no credibility” and Trump accusing him of being politically biased during his time at the FBI.

Vice President Mike Pence told MSNBC’s Andrea Mitchell on Thursday he has “never heard any discussion of the 25th Amendment by members of this government and I would never expect to.” Senate Judiciary Chairman Lindsey Graham called McCabe’s comments “a stunning revelation” and that he would subpoena the former official to testify on Capitol Hill about the matter “if I have to.”

In December, CNN reported that following the firing of Comey, McCabe took the extraordinary step of opening an obstruction of justice investigation into Trump before special counsel Robert Mueller was appointed in May 2017. In the interview that aired Thursday, McCabe told Pelley he “wanted to make sure that our case was on solid ground and if somebody came in behind me and closed it and tried to walk away from it, they would not be able to do that without creating a record of why they made that decision.”

McCabe said that the day after Comey’s firing and after meeting with Trump in the Oval Office, “I met with the team investigating the Russia cases and I asked the team to go back and conduct an assessment to determine where are we with these efforts and what steps do we need to take going forward.”

“I was very concerned that I was able to put the Russia case on absolutely solid ground in an indelible fashion that, were I removed quickly or reassigned or fired, that the case could not be closed or vanish in the night without a trace,” said McCabe, who is promoting his forthcoming book, “The Threat: How the FBI Protects America in the Age of Terror and Trump.”

In its statement on Thursday, the White House called McCabe’s investigation “completely baseless.”

McCabe was fired by then-Attorney General Jeff Sessions in March following an inspector general report that concluded he misled investigators about his role in directing other officials at the FBI to speak to The Wall Street Journal about his involvement in a public corruption investigation into the Clinton Foundation. The Justice Department’s watchdog has referred his findings on McCabe to the US Attorney’s office in Washington for possible criminal charges. The case remains under investigation.

At what point are these criminal conspiracies?

The “force” aspect is frustrating. There is no doubt they conspired.

Would the president be considered the ‘government’?

And that could be considered an attempt at overthrowing the elected government of this country.

Everyone of the conspirators should be arrested and charged.

That’s an “or” in “or destroy by force”. Meaning the preceding conspire to overthrow is valid without a force component.

Yes. He was duly elected.

I thought about that too. I don’t disagree. What they did is not “normal” sedition, but I consider it sedition nonetheless.

I mean its not like one of our top elected officials didn’t come right out and tell us all how this works right?

Let me tell you, you take on the intelligence community, they have six ways from Sunday to get back at you. So, even for a practical, supposedly hard-nosed businessman, he is being really dumb to do this,” Schumer said in a Jan. 3 MSNBC interview.

Asked what intel officials could do to Trump, Schumer said, “I don’t know, but from what I am told, they are very upset with how he has treated them and talked about them,”

Everyone should have lost their minds when he said that but the American people barely took notice. I mean that’s the Senate minority leader outright saying our intelligence agencies would abuse their power to avenge themselves against a sitting President. And people barely blinked.

This is a much better source and provides a better explanation as to McCabe’s motives as to why he decided to do this interview! CBS no doubt was a predictable conduit for providing such narratives! I think a lot of people as William Barr was officially sworn in as the new AG has become nervous as to what he will pursue to investigate, especially considering the corruption at the DOJ and FBI has reached new levels that has them running for cover. 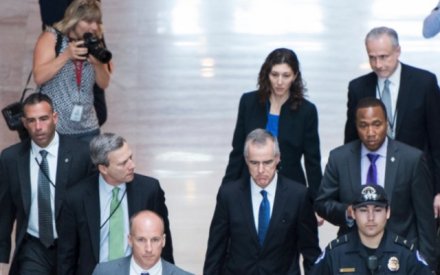 Just because the military wasn’t involved…they did use the strong arms of the law and intel to do it.

This is a much better source and provides a better explanation as to McCabe’s motives as to why he decided to do this interview!

With everything that is going on with our country presently, these are extremely challenging times! A fight to the death is needed, and a few good indictments, convictions and executions would probably do the trick to set this Republic back on course to hold everyone accountable!

The problem is we gotta use the very same law enforcement/system that is corrupt to carry it out.

That’s why I have no faith justice will prevail.

Does the Military count! I can see using a few cases involving corrupt politicians facing military tribunal courts for a few public hangings. You know, like Adam Schiff, Rosenstein, Warner, Bur, maybe even McConnell! One can dream right? We are witnessing the end of our country as we know it and its circling the drain as we speak!

The walkback going on about this today is amusing if not predictable.

Like Conan I have no faith that justice will actually be done. There seems to be two sets of rules and our side always gets the shit end of the stick when expected to follow rules the other side gets to ignore an flaunt in our face.

I thought about that too. I don’t disagree. What they did is not “normal” sedition, but I consider it sedition nonetheless.

…especially given what some of them knew about the origins of the “dossier” and the motivations of the fisa warrant.

I’m afraid we are in uncharted waters here…but I would be caution about using military for anything domestic.

What we need…and yes creating a new agency that’s independent from other alphabet agencies which sole purpose is look inwards at goverment itself.

They have all the power to investigate, indict and even convict/sentence criminals within our goverment agencies.

All other alphabet agencies job is to look outwards towards the general population…and thus the problem IMO. Oh they have internal watchdogs etc. But we see how that worked out. They job is to protect their agency.

It use to be the job of congress to have that oversight, but they’re just as corrupt and political influenced.

Now I know my follow conservative will disagree with me in creating another federal agency but someone must hold THEM accountable.

So I got to thinking about the timing of this @Conan

Apparently this conspiracy to use the 25th came just days after Comey got fired and Rosenstein was the catalyst. Interesting.

The President is incompetent because he fired the FBI director.

Then appointment of Mueller.

And Rod “The Weasel” Rosenstein is still there…that what I find amazing.