NO EXCUSE NO PARDON FOR THE VIOLENCE

If Macron honestly thinks taking this tact is going to work with the Gilets Jaunes he is in for a rude awakening. I think this attempt by Macron to be a stongman authoritarian is only going to add fuel to the fire. This doesn’t end well for him.

That’s nice that Mummy untied him from his hourly spanking to let him play pretend leader.

B…bu…but he offered them 100 Euro a year to play nice! Surely they will take it and go home…and when they do France will be an Islamic state in the less than five years.

Let’s not forget the list of things Macron has said are now forbidden: 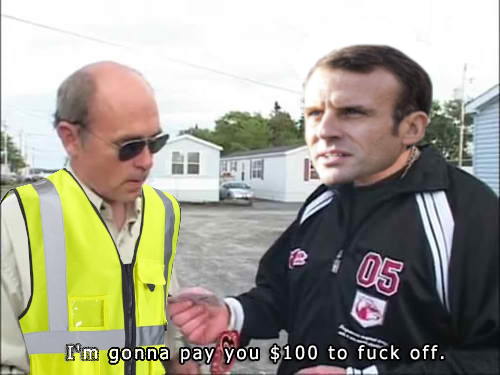 Seen this on FOX news…it’s how it worded that caught my attention.

The radicalizing protest movement was initially triggered by a proposed fuel tax hike and other economic policies amid high living costs in France, and the feeling that Macron is favoring the rich. But as the demonstrations continued, its participants have become more of an amorphous group with disparate demands. They are all united, however, by their disdain for Macron’s government.

Tell me what’s so radical about protesting against gas tax to fund global warming?

It tells me he or someone don’t “get it”.

And then goes off on amorphous group with disparate demands.

It’s seems he’s making accuses why he doesn’t “get it”.

Or maybe it’s just me. Just observer cross the pond.

In fairness watching the coverage on German and UK TV there were a lot of anarchists, communists, and other riffraff, that were taking advantage of the anti tax protest and trying to turn it into a violent uprising for their own benefit similar to the way ANTIFA and the Anarchists have done in the US in the past.

Tell me what’s so radical about protesting against gas tax to fund global warming?

That’s the mainstream media narrative. This isn’t about a single-issue gas tax, it’s about the French getting their backs broken by the welfare state that is being used to provide invaders with a comfy lifestyle while French retirees go hungry. 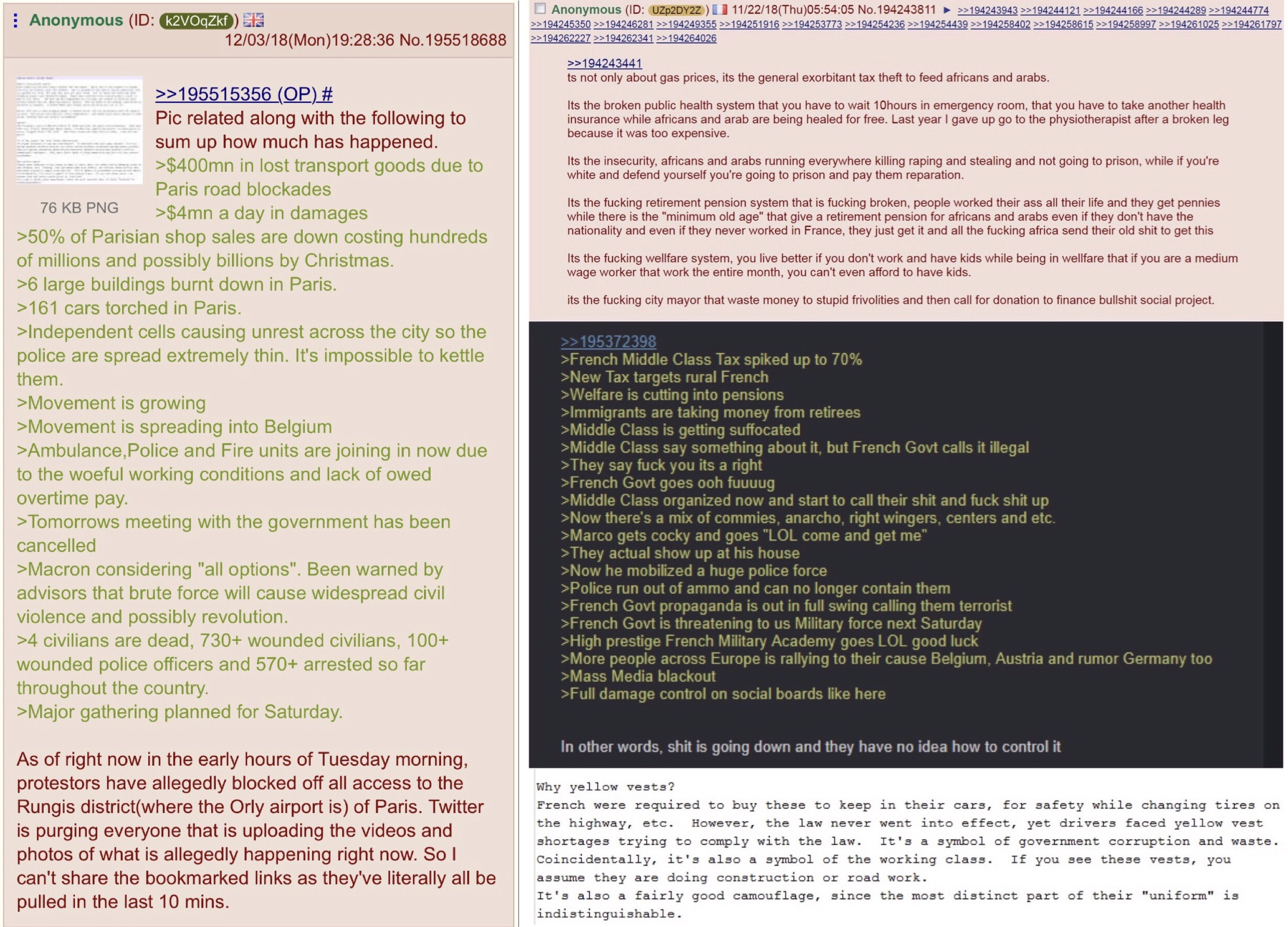 Ah - I had been wondering about the origin of the “yellow vest” and how everyone seemed to have one.

The corporate interests of Fox certainly benefit from globalism. They don’t want the real reasons getting reported on because it might give people “ideas” and we know how they feel about those.

I’m not disagreeing with this but I’m somewhat baffled that it’s now “radical” to protest being squeezed as French middle class are.

And yet I find their philosophy/mentality somewhat amusing.

I can’t believe they’re that much out of touch…but then I look at our elitists. No different then the French.

Got to be bottled water…

Actually it’s pretty accurate. Gov’t tends to step back and let people protest (freedom of expression) right up to the point at which the protests turn violent. When that threshold is crossed Gov’t generally drops the hammer.

This of course only applies in supposedly “free countries”.

The MC in France has actually been getting squeezed pretty hard for several decades now. Compare the percentage of the total tax burden borne by the MC there vs the US and it’s eye opening.

If I remember right they are carrying something like 75-80% of the load whereas here the MC only carries about 25% of same.

That’s why I frequently warn the lefties in this country that if they want Eurostyle Democratic Socialism in the US and succeed in getting it the tax bill is going to be one hell of a slap in the face.

I’m not disagreeing with this but I’m somewhat baffled that it’s now “radical” to protest being squeezed as French middle class are.

It’s radical because they don’t want us getting through same idea. 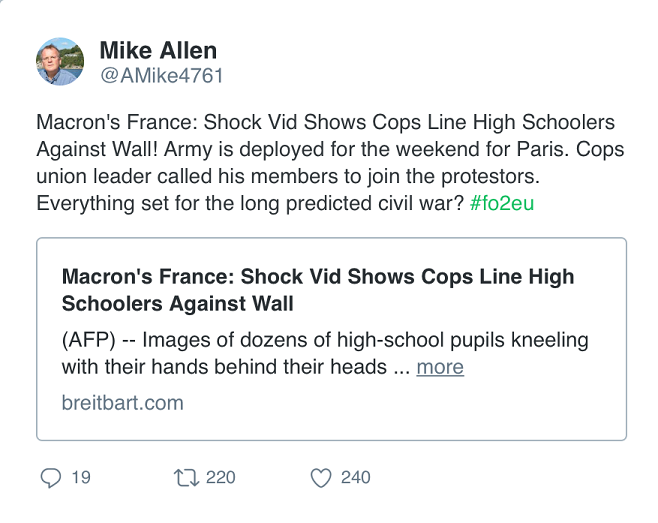 This is the real reason they want little macron out. 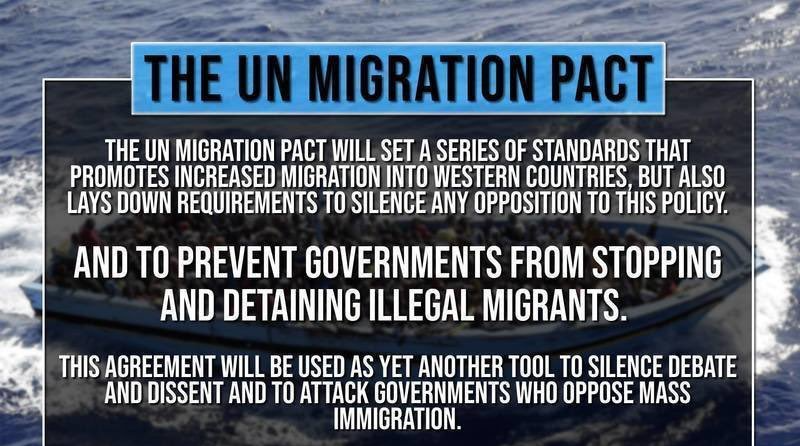 B…bu…but he offered them 100 Euro a year to play nice! Surely they will take it and go home…and when they do France will be an Islamic state in the less than five years.

Either he caves in or they retaliate. Not the best situation but the French have no choice. They’re fighting for their futures. Macron needs to resign. 18% popularity…seriously…RESIGN DUDE.

They kinda go hand in hand.

Take a look at our own history.

Our American revolution basically began over a tea tax.

Protests over those taxes generated an overreaction by the King’s Troops.

Protests then got increasingly more violent and responses got progressively more over the top.

Pretty soon we ended up with British Troops being sent out to seize the militia’s stores and they were met by armed militiamen sworn to stop them.

The rest as they say is, “History”.

The big difference in France is that the populace has been disarmed so if they get violent in the least it’s likely to look like Tiananmen Square again.

In most of the free world though as long as the protesters remain peaceful they’ll be allowed to pretty much protest to their heart’s desires. In much of the rest of the world by doing so you literally take your life into your own hands.