Gotta love that diversity huh? Another day in Mayor DeBlowhard’s city! It appears that pushing old people down the stairs is the new norm in today’s society. UN-freaking believable! 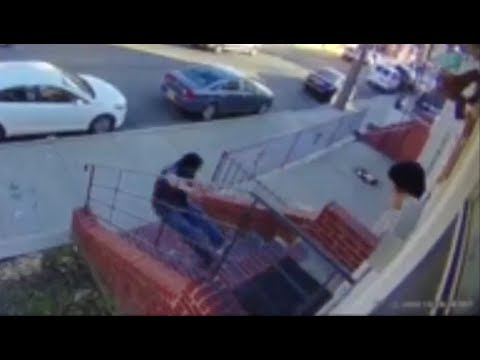 “A 71 year-old landlord was killed in Queens after being deliberately pushed down a flight of stairs by one of his tenants who was behind on rent. The suspect lied about the cause and was arrested and charged with manslaughter.

“Edgar Moncayo, was talking on his cellphone on the stoop of his property on 102nd Street in Corona at 3 p.m. There was a brief scuffle between Moncayo and his tenant, identified as 22-year-old Alex Garces, the video shows. Garces shoves Moncayo, who goes flying down the red-brick staircase and smacks his head on pavement.

Moncayo was pronounced dead at 12:30 p.m. Monday after being on life support with head trauma. The tenant initially told cops the fall was an accident that happened as he tried to carry his mattress out of the building.”

OMG that was hard to watch.

Why manslaughter? Why not 2nd degree?

Why manslaughter? Why not 2nd degree?

Probably because it’s NY! They have the most unfair asinine legal system in the entire country. I would know, that is where I passed my first bar and it was hell!

I don’t think it has to do with NYC. Wouldn’t the crime have to have been pre-meditated with the intent to kill in order to get more severe charges?

That’s the root cause right there.

Wouldn’t the crime have to have been pre-meditated with the intent to kill in order to get more severe charges?

Yes and no. Yes if it can’t be proven and no if jury trial reveals more and decides it was premeditated. Depends on prosecutors in the case. Also I said NY as in the State of New York, and if it’s a protected class then the law doesn’t apply equally to them. To be fair though, it can be argued that intent to murder by a push is weak due to the circumstances of the case. It would be hard to prove it was premeditated. The thing is the DA will probably plead the case down like they always do in these type of cases. He will probably do five to 10 with good behaviour.

If he deliberately pushed him, he had to have thought about it before pushing. Premeditated. I’m sure his attorney will tell the jury, his client only uses the reptilian area of the brain.

Seems to be a thing with non citizens in other countries also. https://youtu.be/Mn7yF9R7ZIs?t=3

Migrant Pushes 8-Year-Old Boy and Mother in Front of …

Jul 29, 2019 · An African national pushed an 8-year-old boy and his mother in front of an oncoming train in Germany on Monday, July 29, killing the boy when the train hit him, police said. The child’s mother survived.

What are you talking about. First world people behave this way every day…too

MONTE, READ THIS SLOWLY, so I don’t have to continually repeat it. I have no doubt our other members know where I’m at. We already have more than enough “home grown monster’s” to sort out; so why would anyone with a speck of sanity wish to allow the importation of more? Now try to digest the logic in my statement. You can do it.

It seems however that you wish to paint all immigrants by the minority that commit crimes. People have immigrated to the US since and including the landing of the Mayflower and that’s not going to change.

Unless steps are taken to round up & deport illegals, American citizens will continue to be injured or die at the hands of illegals. Are all illegals criminals, absolutely not; but then again if they are here illegally, they are criminals. They have broken the law. Remember that thing called law?

Do you have evidence that either the landlord or the tenants in the op are “illegal”?

What does it matter? They were all from Ecuador and displayed the type of behavior one might expect to find in an uncivilized country. Are there Americans that act that way, sure those are mostly in the ghetto or meth addicted rural areas. The majority of the United States of America doesn’t act like this because we come from good stock, that’s just the way it is.

Actually, so far, I only have evidence the landlord is dead. If you like I can put some in stone evidence on the table that covers legal citizens dying at the hands of illegals. Say the word, if you want irrefutable evidence. I guess you know I’ll do it anyway.

What does it matter? They were all from Ecuador and displayed the type of behavior one might expect to find in an uncivilized country.

That’s just more racist nonsense. Such behavior is not limited to particular race and ethnicity.

I never intended to defend anyone who is sub human. Don’t you believe we already have enough home grown monsters roaming our country? Richland man pleads guilty to killing, raping baby | Tri …

https:// www.tri-cityherald.com /news/local/crime/article32189058.htmlProsecutors are asking for a sentence of 40 years, which is above the standard range for Aguilar’s crimes.

40 years for murdering a 9 month old baby. There is no justice.