Reade told reporters that at the time of the harassment and assault by Biden she told various people including her mother, a close friend, and her brother.

Reade has alleged that when she was a staffer for Biden in her 20s, he forced her up against a wall, forcibly kissed her, put a hand up her blouse and skirt, and penetrated her with his fingers. Biden has denied the allegations.

Speaking to The Intercept, Reade explained that her mother even called in to “Larry King Live” on CNN and discussed her daughter’s experience on Capitol Hill.

Here is the full video. Download it because it’s in the process of getting scrubbed from the internet as we speak. 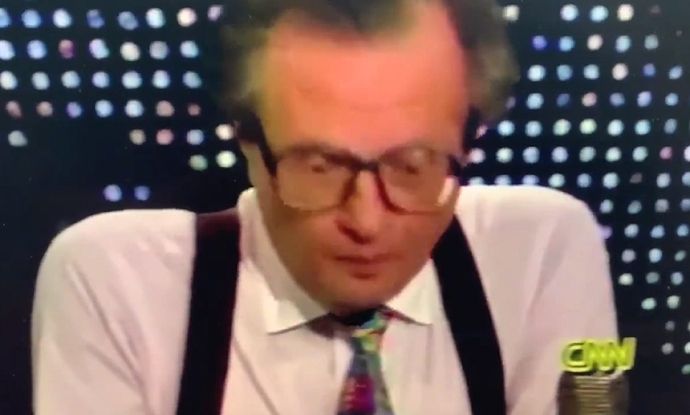 Shocking new evidence has emerged that backs up Tara Reade’s claim about being sexually assaulted by then-Senator Joe Biden in 1993 — and ironically, it originally aired on CNN. Reade told reporters that at the time of the harassment and assault by...

Reminder one of Epstein’s victims also accused Biden of rape.

Weren’t the Democrats screaming that we had to #BeliveAllWomen during the Kavanaugh confirmation hearing? Did they really mean #BelieveAllWomenExceptWhenDemocratsRapeThem - because that’s sure how it seems every single time this happens to a Democrat. Which is often.

They are busing out the old “credible” line saying that the claims of Trump being a rapist are “credible” while the claims against Biden are not. Of course, they never back this up. They all just repeat the party line like good little mindless shills.

In order to determine what is and is not “credible” there should be an investigation into this…but no one can start an investigation because, according to Democrats, it’s illegal to investigate a political rival - how convenient.

The sad thing is Biden is so demented that he probably forgot he even did this by now. I don’t think he will ever address the accusation either. Democrats never respond to this sort of thing and they always get away with it.

This might get good. The MSM won’t report on it though.

Joe Biden was a powerful Senator even back in the 90s. If Reade had spoken up about Joe Biden back then she would have gotten the Clinton “suicide” treatment.

I think Biden will “come down” with the virus and have to be replaced by Cuomo.

So where the hell is those #metoo warriors ?? Why is Alyssa Jayne Milano silent ? What happened to "women must be believed " ? Is slow Joe being given a pass because he has that D next to his name ? Has ANYONE notice all the very uncomfortable women and CHILREN around sniffing, kissing , JOE ? Does ANYONE see a pattern here ? 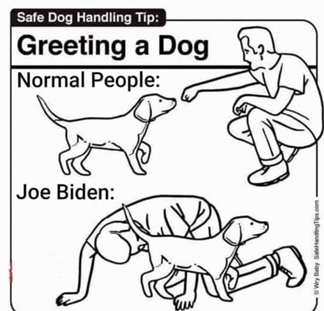 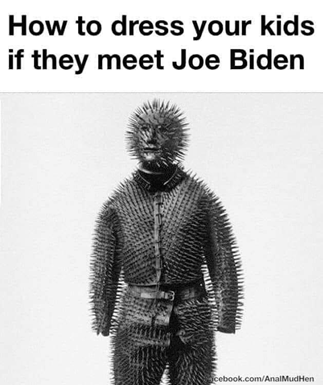 No real surprise in the inactivity and disinterest on this issue by the mainstream media and those who cut and paste from them, in fact not a surprise that the media is complicit in actually covering up the matter.

We had a similar case in Australia where wanna be PM elect in his own mind labor Opposition leader was accused of Rape when it happened, ten year later when he took a grandstanding position and continually since then the accusations have been made again and again but police handed the matter over to Federal police, and they don’t investigate criminal matters only political matters, so nothing has happened, BUT what has been revealed is the bias in the media who actually have reported that this man has been “cleared” because federal police won’t investigate. that Lie would never have happened if the accusation was made of a right wing politician , the media would have been in full attack mode. 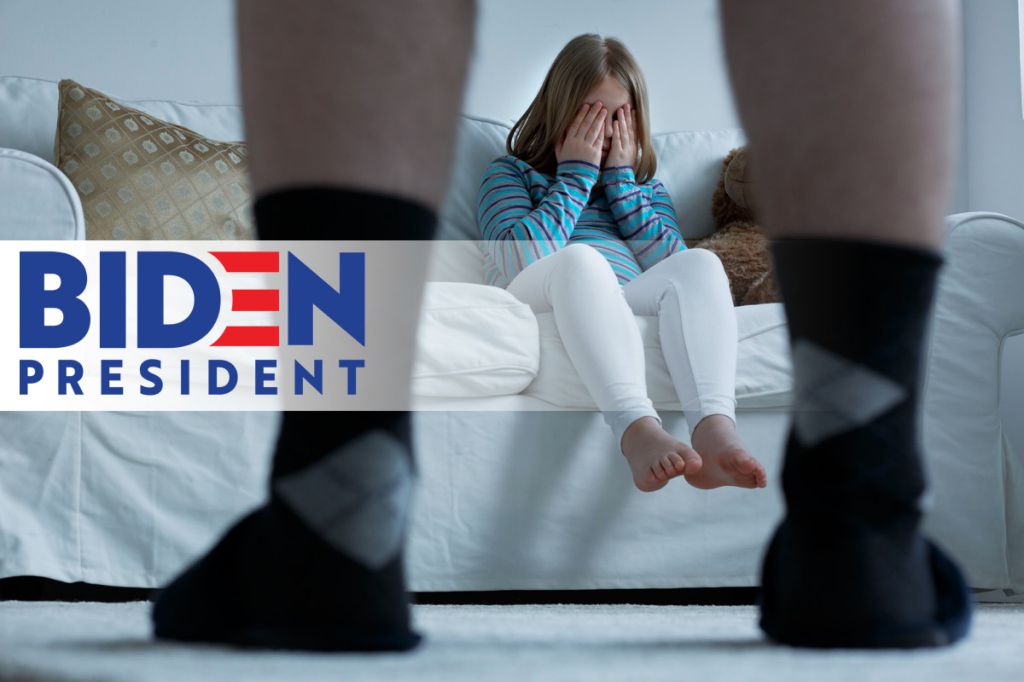 Joe Biden is in the prime of his life, at the top of his game, and ready to take down any threat to his power using his razor sharp wits.

He needs a pyramid hat to sharpen that razor When you have one of the MSM reporting this (finally)…it doesn’t look good. Especially for “Plugs”…

In pic related it is missing the August 11, 1993 episode which has Tara Reades mother calling in to Larry King to discuss her daughter and a “prominent senator”

This could be huge and finally put the nail in CNN’s coffin. 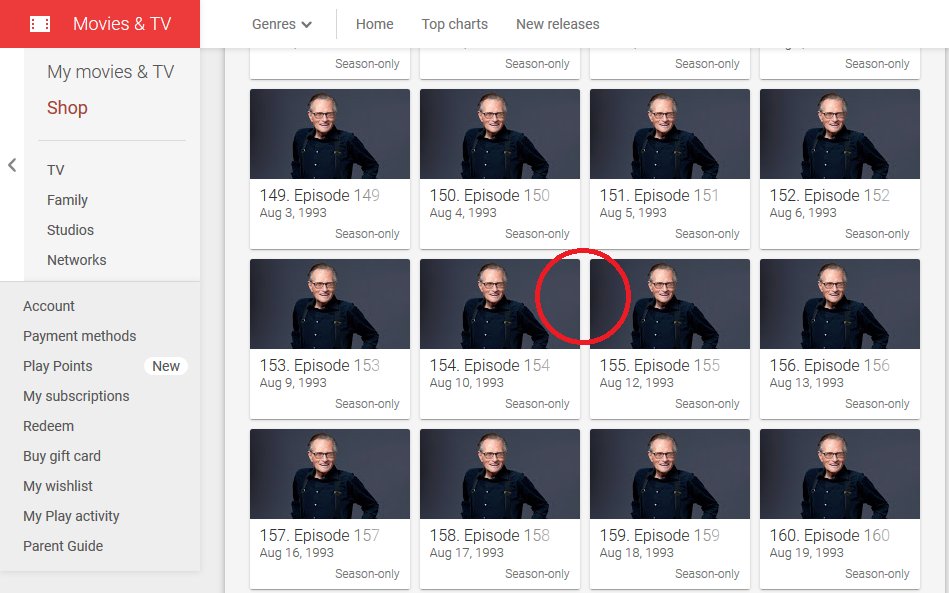 I’m just wondering is Tara Reade is part of that #MeToo movement? Or is this credible?

In a “Larry King Live” segment that aired on August 11, 1993, on CNN, an unnamed woman calls in to the show with her location identified on the screen as San Luis Obispo, California. The show was about the cutthroat nature of Washington, DC, politics and media.

The woman does not mention sexual assault or harassment, nor does she describe in any detail what “problems” she might be referring to. Her daughter’s name and Biden are also not mentioned.
In a phone interview with CNN Friday night, Reade told CNN that she is certain the voice in the video belongs to her mother, Jeanette Altimus, who died a few years ago.

I am thinking there is much more we all don’t even know at this time. But it just seems odd, the caller doesn’t name him by name. But only states, that her daughter is Tara Reade (which would be the Tara Reade’s mother that was talking to Larry King).

Personally, I really never thought Biden even had a chance to go up against Trump. But if these allegations are true, that will almost automatically put Biden in a much awkward position. Which means, Trump will very well use this against Biden. If they ever have a debate.

It also seems like Biden is keeping quiet about this. Even though, he has denied it ever happened. If he thinks he didn’t sexually assault her, I would be in the public spotlight daily, and address it to the American people. He has only denied through the media. Which tells me, that he is afraid that:

2.) He is hiding and doesn’t have the audacity to talk to the American people.

And that could very well hurt his chances to be POTUS.

(So, maybe he really doesn’t want to be POTUS and the Democrats are really holding him hostage.) JMO

They’re going to have to brazen this one out. Replacing Biden would spark a shitshow that would be much worse. Their stooges in the media will wring their hands a little, pronounce him innocent and then ignore it again.