Joe Biden is on the list of 39 people who requested information regarding the unmasking of Michael Flynn. 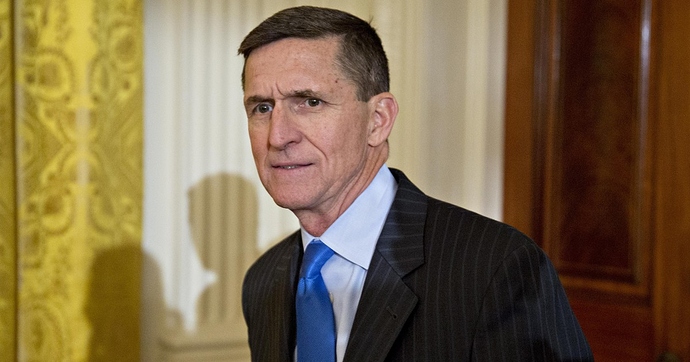 Biden and other Obama officials received 'unmasking' information on Michael...

Former Vice President Joe Biden and other top Obama officials received information in response to "unmasking" requests targeting retired Lt. Gen. Michael Flynn in the final weeks of the previous administration, according to a memo declassified by... 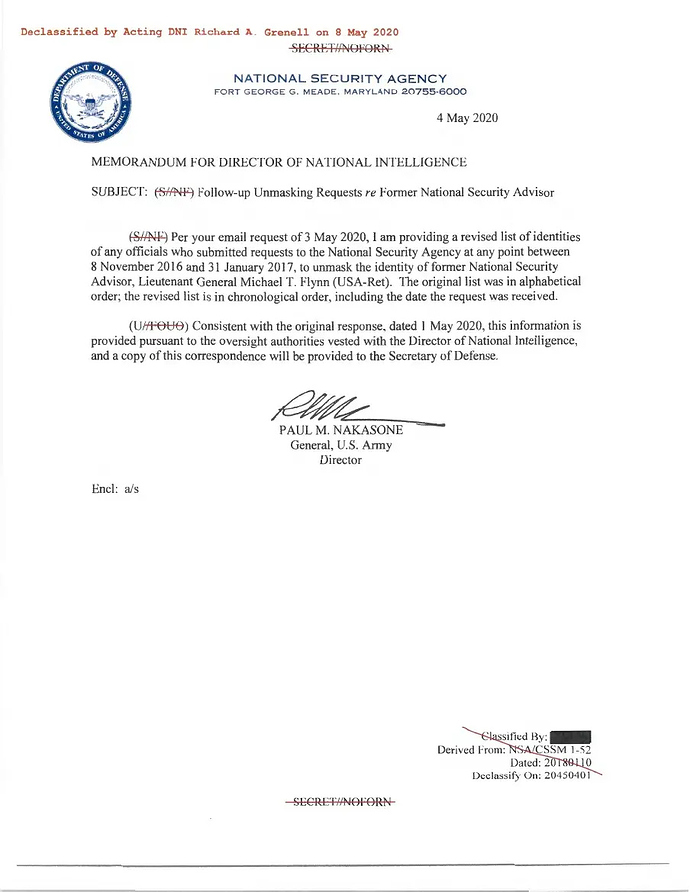 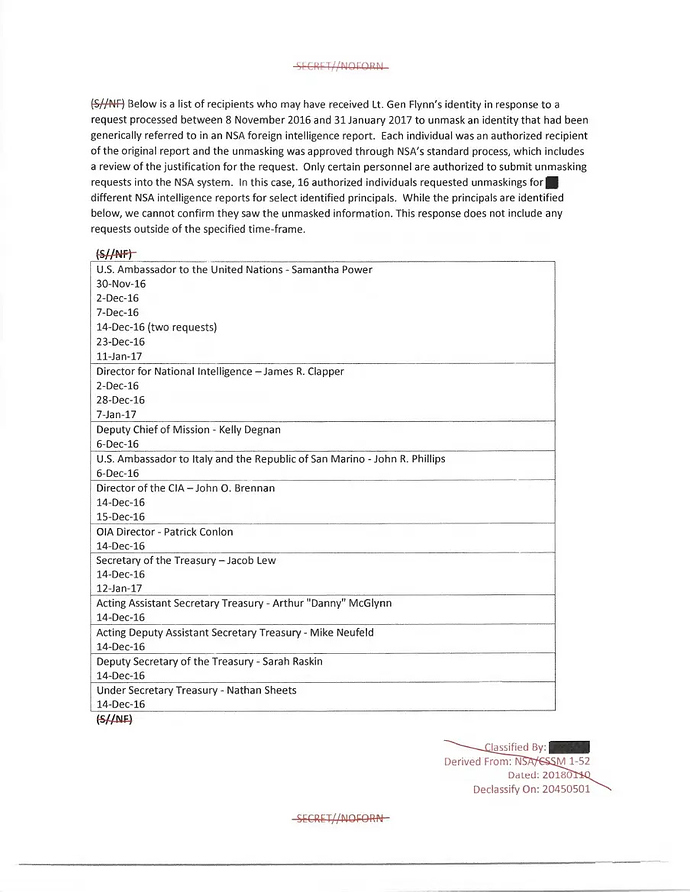 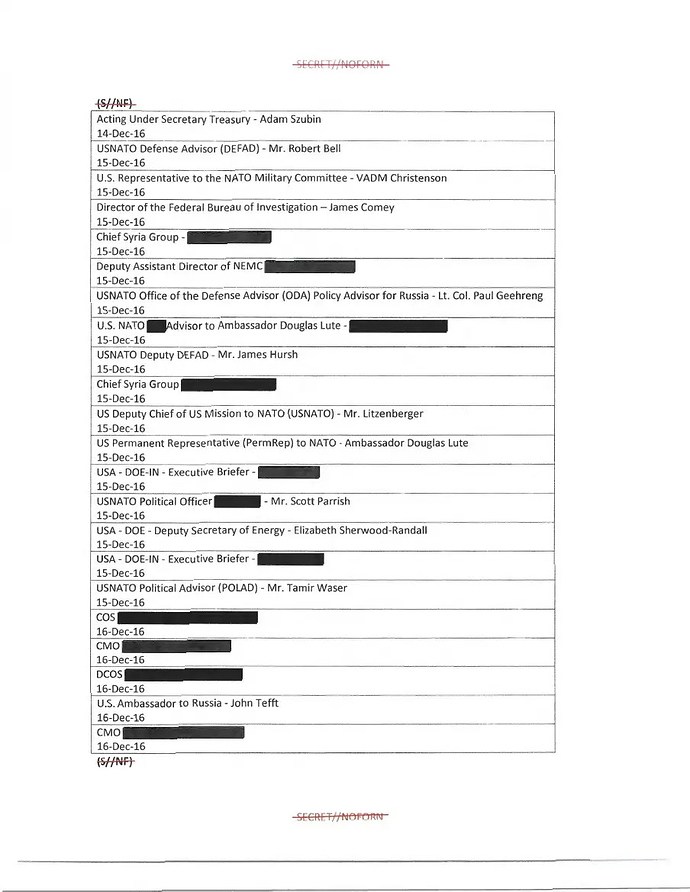 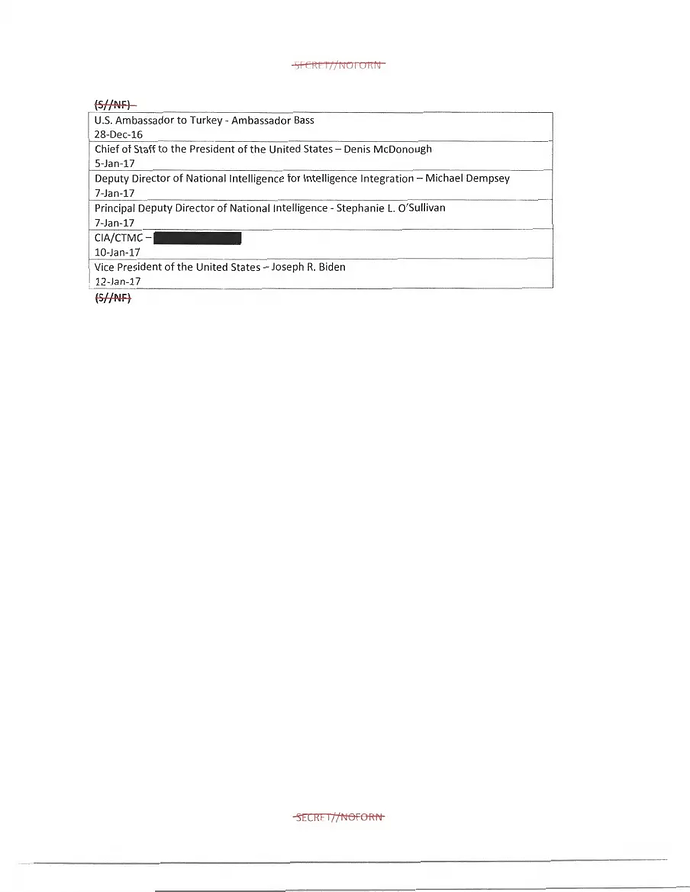 Trump should use this in his next ad. That could shake things up abit once the MSM “sees” what Biden was doing when he was VP.

And, of course, Biden was the last guy to the party.

My first guess is that the Dec 14-15 bunch all agreed to unmask to cover for the person assigned to leak it. Biden said he would do it, too, and finally got around to it in January.

(Of course, the MSM don’t care about what happened in the past.

You have Biden on video bragging about getting the Ukrainian prosecutor fired or he’d withhold funds;
His son raking in millions;
Sexual assault allegations much more credible than Ford’s

Not a peep from the MSM or the liberals. They still support him.

Had that been a republican they’d be in prison.

The left is a back-stabbing, hypocritical bunch.

I believe the more that gets out, people will start realizing what a douchebag Biden really is. And the fact, he is incapable of being POTUS.
Nonetheless, I doubt even now; the Dems really don’t want Biden to be President. Unless, he chooses Michelle Obama - who could later run in 2024. Just a hunch.

Low morals, no ethics, no conscience, no remorse, no logic, no brains,…just more worthless parasites, sucking lifeblood from Uncle Sam.

Liberalism is an incurable mental disorder.

Michelle as VP would be an act of pure desperation. Hanging on the glory of her husband’s coattails. What other the name Obama could she bring to the table?

She has nothing. But that is what was being reported by the left.

The identity of the leaker may not be on the list of unmaskers. Recall that the lizard Comey had a friend of his leak to the press in order to get a special prosecutor (another friend of his) assigned to the Russia hoax investigation.

Low morals, no ethics, no conscience, no remorse, no logic, no brains,…just more worthless parasites, sucking lifeblood from Uncle Sam.

Liberalism is an incurable mental disorder.

They seem to find them when it suits their cause.

The sincerity of that failed glaringly when they gave Biden a pass/blessing for behaviors and deeds they found abhorrent if not on the politically correct side of the coin.

There is going to be another 4 years of Trump and he will NOT be a lame duck. That isn’t the way he functions. Chances are he will get more done as people have seen what he is capable of even while being handicapped by RHINO’s and the dems.

Of course his name is on the list! Good grief those that think the Nixon Administration was corrupt and criminal don’t have a clue that the Obama Administration puts Nixon to shame.

She has nothing. But that is what was being reported by the left.

Well, they’re all delusional so that would only make sense

Trump has been very smart in filling Federal Judge positions that Obama neglected.

As well as the Supreme Court having more that adhere to the Constitution vs. feel good rulings.

If Biden were elected he’d be tied up in court. There are stop gaps in our system, thank God.

I remember Watergate well. This is purely Nixonian and the high watermark of the deep state swamp.

Which makes me question if Scalia was murdered given what we now know about Obama? It wouldn’t surprise me if that were true. 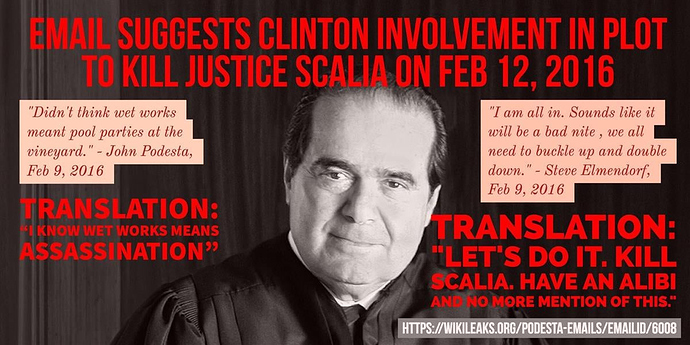 According to The Washington Post , Ritchie continued that he was “stunned that no autopsy was ordered for Justice Scalia,” before pointing out the many flaws he saw in published accounts on the subject.

Ritchie wasn’t the first to float this conspiracy. Conservative radio talk show host Alex Jones suggested as much in a video he posted to Facebook on the day of Scalia’s death (“The question is: Was Antonin Scalia murdered?”).

The next morning, the Drudge Report pointed out that the judge was found with a pillow over his head, presumably providing additional evidence of foul play. Conservative political commentator Michael Savage also weighed in, wondering “Is it a conspiracy theory to ask questions that are so obviously in need of answer, or is it just common sense?”

But as someone who has studied how and why misperceptions emerge and spread, Ritchie’s words struck me as noteworthy. Unlike Savage or Jones, Ritchie’s livelihood isn’t dependent on appealing to a conservative audience or making shocking allegations.

To the contrary, this is a man who made his living investigating crimes through the accumulation of evidence and the judicious use of reason. It is at least plausible that his primary motivation is to ensure that the truth is known.

Especially liberal Democrats – as hard to fathom. Why should anyone by surprised at the death of a 79-year-old man when the average life expectancy of a man in the U.S. is 77? Why is the decision by Scalia’s family not to have an autopsy performed met with skepticism? And why second-guess the U.S. Marshals Service, an agency charged with protecting justices of the Supreme Court, when it concluded that there was no foul play?

Is it really so strange?

It may be tempting to assume that reasonable people are immune to conspiracy theories, but doing so would be a mistake. Research into misperception, rumor, and conspiracy theory suggests that even reasonable individuals can reach conclusions that don’t align with the best available evidence.

Researchers have identified numerous strategies that individuals use to assess what is true. Under the right circumstances, each can lead to misperceptions. For example, if a claim is consistent with other things you know, you will likely find it easier to understand, which in turn makes it seem more truthful – a phenomenon that has been called the illusory truth effect. Claims that contradict a prior belief, in contrast, tend to elicit counterargument.

The coherence and explanatory power of a causal story also influence whether it is believed. Individuals will often stick with a plausible explanation even if the available evidence doesn’t support it. In a classic study, researchers found that individuals would continue to attribute a warehouse fire to paint held in a storage room even after they were told – and could recall – that the storage room was empty at the time of the fire.

One final consideration that individuals use when assessing whether a claim is true is the belief of others. The more often we hear a claim, the easier it is to believe – especially claims that come from people we know and trust.

For example, one of the most important predictors of what Americans think about the risks posed by climate change is what members of Congress say and do about this issue. The more Democrats voice support for the issue, and the more Republicans are critical of it, the more polarized Americans have become.

In light of this, we should expect Donald Trump’s recent speculations about the Scalia conspiracy theory to contribute to growing public concern about this possibility. 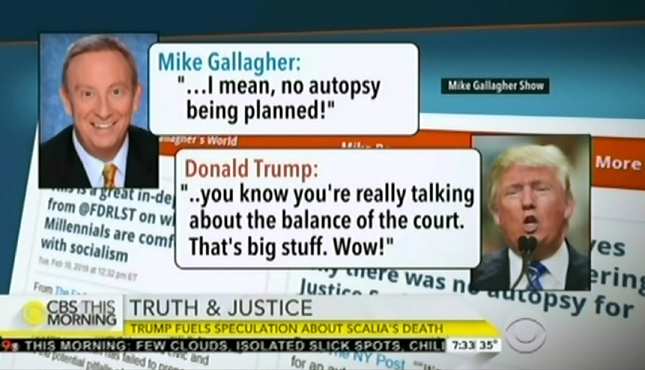 Which makes me question if Scalia was murdered given what we now know about Obama? It wouldn’t surprise me if that were true.

We’ll never know, will we?

No! Especially given the fact his death never produced an autopsy report to the public. Pretty shady if you want to know the truth. If we had a media that wasn’t bought by China maybe these questions would have been asked.

If Biden were elected he’d be tied up in court.

Obama ignored every lower court ruling against him and by the time the SCOTUS ruled against him his damage was already done and I think Biden will follow the same pattern so it’s imperative that President Trump gets a 2nd term.